Lynx Day Two and Continuing the Community Draft Board

Share All sharing options for: Lynx Day Two and Continuing the Community Draft Board 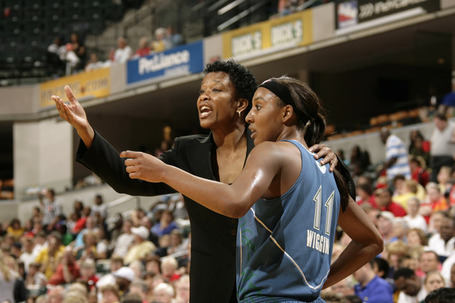 Bigger, longer, more athletic, better coached, harder working, and straight up more talented. These are some words you can use to describe a Minnesota professional basketball organization during last night's game against the Indiana Pacers Fever.

For the second night in a row the Lynx beat the hell out of their opponent. For the second night in a row they scored a ton of points, moved the ball well, scored efficiently, and went 11 deep with the roster. Folks, if you like to see the little orange ball go in the bucket, you need to be watching the Lynx right now. It's only game two, but I think they're on to something this year with a fantastic style of basketball. Last night the Lynx's starting front line went 25-31 from the field. They shot nearly 93% from the field in the 1st quarter and over 63% for the game.

The Lynx have always been kind of a down-on-their luck franchise. This team has a new coach, a new attitude, and is filled to the brim with players from places like UConn, Tennessee, and Stanford. If Renee Montgomery can eventually move into the starting lineup alongside Candace Wiggins in the back court, and if she can live up to her promise she showed as the starting point on probably the best women's team in NCAA history, this team is absolutely onto something.

Plus, you can watch all of the games on WNBA League Pass without having to worry about cable company bulls$#t blacking out the action. Go Lynx, go WNBA.

Finally, if you scroll down the page a bit you will notice that we had a close call for the #6 spot on the Canis Community Draft Board. Here is where we're at:

Who should be the #7 player on the Wolves' draft board? Vote below and let us know if you think we're leaving anyone out at this point.

Also, speaking of draft boards, drafts, and mock drafts, the good folks over at TWolvesBlog are hosting a "guess the top 14 picks" contest with the grand prize being a pair of nice tickets to a Wolves game next season. Click here to check it out.