Share All sharing options for: Ends of Eras, the Mark Madsen Open Thread 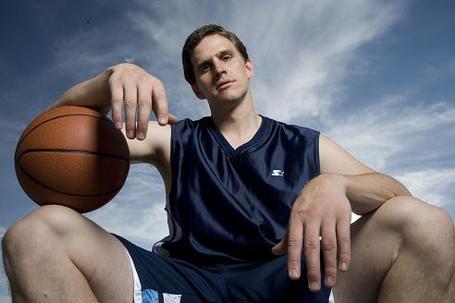 OK, now that we have had some time to think about the Clips/Wolves trade, I would like to add one important item to the discussion: The trade marks the official end of two important eras of recent Wolves history--The KG age and the Roy/Foye debacle.  Both eras died when Mark Madsen was sent to LA.

The first point is obvious: Mad Dog was the last player on the Wolves roster to play with KG.  He is the last remaining Wolves player who actually laced it up with the greatest player in Wolves history.  In just two short years, the Wolves have undergone a complete roster makeover.  I can't think of too many rosters in the league that have undergone such a radical makeover in the last two seasons.  Everyone is gone.

The second point is a bit less obvious.  Madsen, while being a fine citizen, was involved in one of the darkest moments of recent NBA history: He was the key actor in the greatest example of tanking in league history.  In the last game of the 05/06 season, Madsen jacked up 7 three pointers, missing them all.  The game was remarkable on two fronts.  First, the Wolves were in the midst of a grand tank-a-thon, sitting out KG for multiple games and fielding a starting lineup of Eddie Griffin (RIP), Justin Reed, Rashad McCants, Marcus Banks and Marc Blount against the Griz in a last-ditch attempt to keep the top-10 protected pick owed to the Clippers in the Marko Jaric trade.  Second, the Griz were trying to lose a game in an attempt to avoid playing the 60-22 Dallas Mavs in the first round of the playoffs.  In an overtime game, the Griz did not play a single one of their starters over 25 minutes while sitting Pau Gasol.  Madsen ended the game shooting 1-15 from the floor with the aforementioned 7 three pointers.  His 15 shots were a career high.  Memphis also sat out Eddie Jones while the Wolves gave Ricky Davis the night off.  The Wolves lost the game and were guaranteed their first round draft choice.

As we all know, the first round choice was then used on Brandon Roy...who was immediately traded to the Portland TrailBlazers for Randy Foye.  To his credit, coach Dwane Casey understood the stakes:

"There's been so much doom and gloom around here," Casey said. "There is a rainbow at the end of the storm."

The rainbow for Casey was Roy.  Unfortunately for him, Kevin McHale stood in the way of him keeping Roy as well as him staying on as head coach in the following season.

Actually, Madsen's departure hasn't completely ended the Roy/Foye era.  Memphis' leading scorer on that pathetic night was Brian Cardinal, who jacked up 18 points against the lowly Wolves.  The front office also has some reminants from the night:

Fred Hoiberg received a standing ovation between the first and second quarters. Hoiberg retired on Monday to join the Timberwolves' front office, deciding not to risk coming back from open heart surgery he had before the season started.

Whatever the case, hats off to David Kahn for doing all he can to right the Wolves' sad history with Ms. Karma.  With Madsen and Randy Foye out the door, the Wolves have turned the corner on Roy/Foye and KG.  Here's to a new era. We'll have to wait and see what happens to Cardinal and Hoiberg.

Finally, the trade now means that Corey Brewer is the longest tenured Wolf on the squad.  How things change.