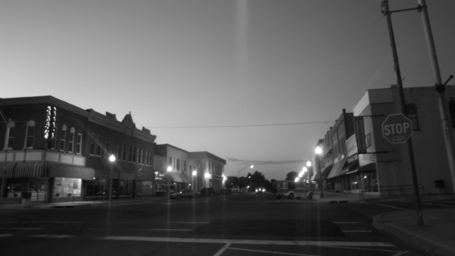 We started out in Omaha, NE where we visited with old friends and took in a performance of my brother's latest play, Martin McDonagh's The Pillowman (McDonagh is best known in America for his screenplay for the movie In Bruges). Mike (my brother) is part of an Omaha collaborative named the F-Troupe.  He played the part of the sick detective Tupolski and it was his best role to date.  The play was superbly acted with a minimalist production.  Unfortunately, its run ended on Sunday and you will simply have to take my word for it.   Actually, that's not completely true.  The guys ended up in the black and with good reviews from the local press.  In the theater world that is just about as much as one can ask for.  Mike will now return to working as a stage director at the Rose Theater and dating roller girls.  I will make sure to feature the F-Troupe's next production.  Oh, we also got to catch a celebrity basketball game with Dwyane Wade at Omaha North.

After Omaha we made the long trip down to Oklahoma to visit more family and friends.  We drove all over the state and I was introduced to the wonderful world of feral hog hunting.  Ladies and Gents, if you have never seen a feral hog, let me tell you that it is most definitely not something you want to run across on a regular basis.  Apparently, large pigs have been escaping from hog farms and going feral within a matter of weeks.  These non-native feral hogs then proceed to eat everything in site, destroy property, and harass humans.  The solution to this problem is, apparently, to train two bulldogs to have a taste for pig ears and to walk out into the country with said dogs, a hunting rifle, and, perhaps, a beer or two.

In theory the hunt is supposed to go like this: The dogs will sniff out and lock on to the ears of a feral hog, dragging it to the ground and not letting go.  At this point the hunters (us) will walk up to the scene, blow a whistle to release the dogs, and then shoot the large pig as many times as possible until it stops moving.  In practice, we released the hounds, watched them run off into the brush, yelp a few times, and run back to us followed by a 4-5 foot long, 300lbs black feral hog with a hankering to do some damage to the stunned guys with guns and beers.  Did you know it is possible to climb a tree with your hands full?  Neither did I.

Other highlights from the trip included a long drive on Route 66 from Yukon to Clinton, OK where we ate an onion-fried hamburger at Sid's and visited the Route 66 Museum; the best chicken dinner of my entire life at Stroud's in Kansas City (seriously, it is the best chicken in the country); a quick stop at the "home" of John Wilkes Booth's killer; a trip to the largest all-black town in American history (Boley); and a visit to a WWII POW camp for German prisoners in El Reno, OK.  Memphis was its usual wonderful self and St. Louis was a tad more run-down than I previously remember.

In terms of food and sight-seeing recommendations, I highly suggest Stroud's, Sid's (go to the one in Yukon, not El Reno; the one in Yukon has better burgers and it is run by an Elvis impersonator), and the Cozy Inn in Salina, KS.  Stroud's was legitimately one of the top 2-3 meals I have had in my lifetime and the Cozy Inn is the home of the slider. The Cozy Inn features a grill that has been in use since the 1920s....and yes, that means it tastes really, really good.  I also suggest a trip to the National Cowboy Hall of Fame in OKC as well as a detour to the Stax Museum of American Soul Music in Memphis.

OK, enough with our vacation.  A lot has happened in Wolves-land since we left.  They signed Ryan Hollins, they hired Kurt Rambis, Ricky Rubio is still in Spain.  The Hollins signing is an interesting transaction that we will go into in more depth in a later post (preview: it's a fantastic move).  I'd also be lying to you if I said that I knew the first thing about Rambis' coaching style or locker room abilities.

What I do want to say is that David Kahn is juggling a lot of balls right now and we really can't judge how he is doing until some of this stuff plays out.  In many ways he's doing an Obama-esque job.  He came in with a platform of change and he has done some really good things but until we know how some of his more major moves play out (Rubio = health care, cap space = the war in Iraq...you get the picture) we really can't tell if change is change or if it is simply another way of making sure everything stays the same.  I wish I could say it boiled down to something more than "we'll just have to wait and see" but that's it.  Sure, we'll have to sit and watch guys like Jim Souhan play the part of the angry paid mob descending on the health care forums, but there really isn't anything to see here yet. We need to see if Rambis can coach, if the cap space can be spent, and if the draft picks will work out.  Change is possible but it is still dependent on additional moves and a bit of luck.

Well, that about does it for now.  I should be back in the swing of things in a day or so and we'll then get ready to roll out our season preview, an updated Building a Winner series (hint: Rudy Gay!), and some more Lynx coverage.