Share All sharing options for: 양용은은 이긴다!!! (A break from the NBA) 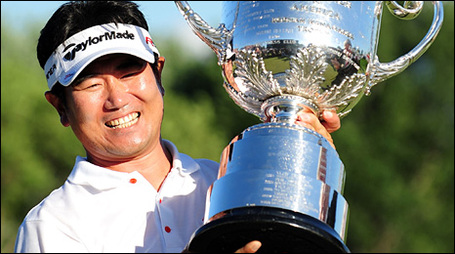 While it will never match the NBA in terms of athleticism and kinetic energy I have long thought that the PGA is the only other non-soccer sport in the world that can compete with the Association when it comes down to producing life-mirroring epic narratives.   Outside of the NBA Finals, I can think of no sporting event I would rather watch more than the final day of a PGA major championship.

If there were any justice in our modern sports media world, Y.E. Yang's victory over Tiger Woods at Hazeltine would be talked about ad nauseum for weeks on end.  Yang whooped Tiger's ass.  He walked out for the final round with an anti-red-Nike-get-up Le Coq Sportif fighting cock emblazoned white shirt (which should be the uniform of any Tiger challenger from here until the end of time) and he put constant pressure on the #1 player in the world, culminating in a spirit-crushing utility club shot over a tree and 8 feet to the pin on the final hole of the championship.  If this guy spoke with an Alabaman drawl like Bubba Watson, he'd be a folk hero until the cows come home.  Instead, he's a second class story to the Jay Glazer/Favre speculative bulls&%t that dominated today's airwaves.  When was the last time we had this big of an underdog victory?

The really sad part about this story is that Yang's English capabilities should have made him an even more transcendently likable figure.  If anything, his folksiness is immediately recognizable with nothing more than his smile, unironic celebration, and the meritocratic nature of his accomplishments.  This dude made Tiger crumble.  Flip the script for a second.  If Yang had been the guy who missed put after put down the stretch while putting his drives and long irons in the rough, Jim Nantz would have waxed poetically about the inevitable outcome of an inferior player succumbing to Tiger's greatness.  Y.E. had none of this.

It really is impossible to overstate just how much Yang broke out of the role of a typical 4th-day-Tiger-partner golfer.

Y.E. should be the father of a new sports term: Yanged.  Any time an underdog happily makes his way through insurmountable odds and flips the script, a yanging has happened.  Any time you quietly do your job to the best of your abilities only to produce an outcome that is superior to what was expected from a more popular/well-thought-of peer, a yanging has happened.  Hopefully, the Wolves will yang several opponents this season.

As someone who lived in Korea for a total of nearly 2 years, I am beyond excited to see Mr. Yang win the PGA Championship in my back yard.  As someone who looks to sports to provide super-sized life lessons as entertainment and generic teachable moments, Yang just produced one of the most memorable moments of my lifetime.  He's right up there with the 87 Twins and the 1990 Gopher Run to the Elite Eight.