I've made no secret about it: I'm drinking the Kahn-Aid. With some spare time on my hands (not really but I did it anyway) I made a little flow chart for you guys to have an overview of the trades Kahn has made.

You can also watch the chart here. 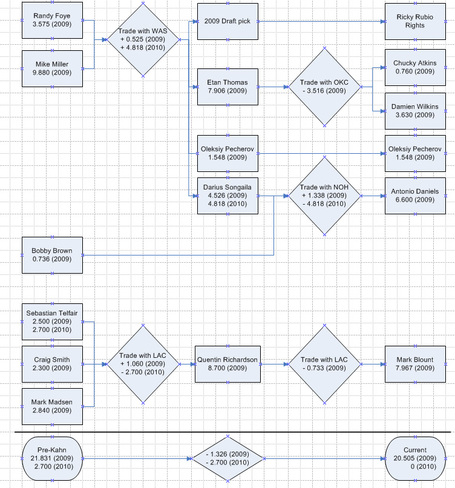 Some things that struck me:

Kahn managed to save a total of 4mil in combined 09 and 10 salary. This might not seem very spectacular but I think it's pretty amazing if you look a little closer. We had to add 5mil to make the Wizards draft pick trade work! If we look at only that party of the equation you can see that Kahn managed to turn Miller, Foye and Brown into 1.6mil LESS salary .. and still get Rubio.

I'll let you decide on the talent part of that equation: Miller Foye and Brown for Rubiorights, Wilkins, Pecherov and Daniels (Atkins doesn't stay) ... I'd say that's pretty nice.

Check out the flexiblity:Telfair, Madsen and Smith had only 5.140mil in exp this year. Mostly because Telfair had a 2yr deal. Kahn managed to turn that 2yr deal and 2 smallish expirings into once nice neat 7.9mil package.

For the upper part, the Draft-trade damages the flexibility. We have 2 exp and have to trade it for 2 exp and a large 2yr deal. But Kahn strikes again, turning the 2exp, the large and the smallish Bobby Brown contract into 3 expirings.

All this has effectively helped in making room for new talent: Hollins at 2.2mil, Rubio rights, Sessions at 4mil and the signing of Flynn and Ellington. It clearly shows Kahn is thinking long term, doing what he said he would