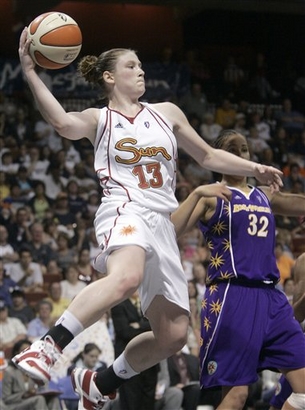 The Lynx sent out a press release this morning:

The Hartford Courant put out a story this morning that may have something to do with it:

STORRS - A WNBA source again suggested Saturday that there is better than a 50-50 chance the Connecticut Sun and Minnesota Lynx will agree on a trade that would send veteran guard Lindsay Whalen and the Sun's second overall pick in the first round to the Lynx for former UConn guard Renee Montgomery and Minnesota's No. 1 overall pick.

If that trade is made, the Sun would use the No. 1 pick on UConn senior Tina Charles, reuniting best friends and All-Americans.

After Charles scored 25 points and had 13 rebounds in Saturday's 88-47 win over No. 7 North Carolina, she said she hadn't heard about the impending deal.

Whalen, the former University of Minnesota star who joined the Sun in 2004 and has developed into a perennial All-Star, has apparently given her consent should the deal be made.

Whalen and her husband, pro golfer Ben Greve, are Minnesota natives who met in college. Both of their families have urged them to come home.

The sticking point appears to be Lynx executive vice president Roger Griffith, who is weighing Whalen's higher salary against her potential gate impact.

The Lynx likely don't need Charles as much as they might need an extra guard. They already have Charde Houston, Nicky Anosike, Rebekkah Brunson and 6-foot-5 Quanitra Hollingsworth to man the inside.

They seem much thinner at guard with Seimone Augustus, Kelly Miller and Roneeka Hodges — all free agents. Only Candice Wiggins and Montgomery, back-to-back first-round picks, are under contract with the Lynx.

We'll let you know if we hear more about the potential deal.

UPDATE: Its official and the phones in the Lynx's ticket office are already busy.  Below the fold is a transcript from Whalen's conference call with the local media.

Whalen: “I’m excited to come home and be a part of the Lynx organization, and just try to reach some of our goals; Win lots of games and get to know my new teammates and staff. I’m very thankful to Connecticut, Coach Thibault and the staff there. Everything that I learned up there, and all that we were able to accomplish in my years up there. Like I said, I’m excited and ready for the challenge of coming home and trying to help the team and make us better.”

Question: Has this always been a goal for you to come back home and play professionally?

Whalen: “Well, I think it’s always been in the back of my mind; Some day would love to play professionally in Minnesota… Obviously, being that I’m from there… Thought that it would work out some day, but wasn’t sure when. It happened to work out this year. Really excited about the chance and really looking forward to it.”

Question: What does this mean to your friends and family?

Whalen: “I think they’ll be happy. I’ve been talking to people a bit today… Your friends and family are going to be supportive, but to be able to come home and play in Minnesota, I think everyone is pretty excited for me to be back home. I’m excited to see where the team goes.”

Question: You injected life and enthusiasm into the Gopher Women’s program, do you think those same expectations are going to be set on yourself for this Lynx franchise?

Whalen: “For me, it’s important that when you go into a new situation and challenge, to do your best and play as hard as you can. Things just kind-of happen if you work hard. When you come together as a team, you play well together. I think things just happen. That energy… Things just kind-of come into place. I just hope we’re successful and play hard and play well together. If we do those things, for the most part, things will take care of themselves.”

Question: Can you speak a little bit about coming into a situation where you might be asked to lead a young team, where as in Connecticut, you were a young player on a veteran-laden club? How do you feel you’re going to handle that?

Whalen: “I think from being in the league so long, now in my seventh year, with that experience and the fact that I’ve had lots of different responsibilities with my teams in Connecticut… When I was first there, of course I was a rookie, with a veteran team, and I tried to fit in and figure out where I could help there. With each season, you evaluate what you need to do to help the team, so I think just being a veteran, I’m going to bring some leadership and experience… A couple years of being in the Finals… I think just any experience like that will help the team and younger players and I will take on that responsibility and do the best I can.”

Question: Do you think you’ve become the new face of this franchise, Lindsay, or does that belong to Seimone?

Whalen: “Seimone is definitely the face of the franchise… I mean I think I’m just going to help win games; Try and make us better. Do those things and everything will work out.”

Question: How many more years do you want to play in the league, and how is your health right now?

Whalen: “I feel good. I’m not really sure how many more years, to be specific. We’ll just kind-of see where that goes, and I’m going to keep playing as long as I’m healthy. Enjoy the game, play with passion, see how long I can play, and not really going to think about that for a couple more years and see how each year goes and take it from there.”

Question: What’s your take on the stability of the league?

Question: With your addition, and the return to health of Seimone Augustus, do you think this Lynx team should be looked at as favorites in 2010?

Whalen: “I think we have a lot of pieces. We’re going to work hard, and try to make the best that we can put out there. As far as contenders, it’s hard to say, play as hard as we can… There’s so much talent on the team. To now be part of… Get to work in training camp and see where we go.

Question: Wondering if the #13 jersey is going to be seen on your back this summer in a Lynx uniform?

Whalen: Is anyone else wearing it? That’s fine… I’ll stick with that.