Share All sharing options for: With two hands, Corey, with two hands (i.e. more of this please)

There have been not a few times this season where the Wolves have lost a game in something approaching a respectable manner and after which I have said to myself something along the lines of "Yeah, but there really wasn't anything for them to build on.  They just caught someone on an off night while getting some random production out of their own 1 and 3."  Last night's loss to the Thunder was not one of those nights.  I would even go as far as to say it was their best game of the year in terms of long term development.  I'll explain why below the fold.

There has been some significant progress in Wolves-ville over the past two weeks and last night's tilt features examples of both.

First, Corey Brewer is starting to look like the guy the team drafted from Florida.  Take a look at his month-to-month splits:

This is the 2nd month in a row where he's been functional from the floor.  He's passing the ball well, he's rebounding at a decent clip, and he's filling up the stat sheet in ways this club has only seen matched by Kevin Love.

Last night Brewer finished the game with an outlier of 25 points on 10-17 shooting while dishing out 6 assists and nabbing 5 steals.  Most importantly, he locked down (yes, locked down) Kevin Durant when it mattered the most: down the stretch in the 4th quarter, holding KD to 6 points and a -1 with only 3 FGA.  This isn't the first time we have seen Brewer show some flashes as a lock down defender.  It is becoming something of a regular occurrence for Brewer and it is a very welcome development.

Last night's Corey was capable with the ball; setting up pick and rolls, finding open men, not looking like a chicken with his head cut off, etc.  He was downright disruptive in transitions and off the cut.  He's starting to finish some of his previously hopeless drives into the lane.  He even tried a left handed finish last night.  The dude has put in some serious work on his game and it is starting to really pay off for both him and the club.  He and Love are far and away the easiest guys to root for right now.

I'm working on a few spreadsheets for Brewer's offensive game but what has really turned things around for him is getting to the line at an increased pace (over 3/game in the last 2 months), taking more "realistic" threes (i.e. not ones out of his relative hot zones), and getting more opportunities in transition.  At the beginning of the season I wrote that Corey Brewer would have no shortage of opportunities to prove himself on the offensive end this season.  The Wolves have installed an up-tempo system that rewards exactly the type of skills we thought he had at Florida.  Those skills are starting to surface in the NBA.  Now, if only he would take it hard to the rim with two hands with a game-on-the-line drive to the bucket.  (And no, I do not think that Jeff Green fouled him; it was a hell of a defensive play by the Thunder and a crappy one-handed drive by Brew.)

The second big development example last night was that Al Jefferson played relatively solid defense.  He collected a charge when it mattered, he blocked two shots, he rotated into correct positions, and he didn't display what I thought would surely be the next entry into the Wolves Hoopus Dictionary, The Big Al Twist: An uncanny ability to get turned around on defense and end up with your back facing the guy with the ball.

Big Al has also been playing what can only be described as "diversified ball" over the past few weeks or so.  Whether this has more to do with the new coaching staff or Al's need to find ways to contribute other than scoring with a bum knee, I don't know.  What I do know is that Al is passing out of situations he previously would have put his head down and rammed his way forward.  He is moving his feet in anticipation on defense, not just in reaction to someone who has already blown well past the point where anything could be done about it.  He's even starting to say the things you'd expect your best player/team leader to say during 1/2 time interviews and post game pressers.  Last night's 1/2 time comments focused on the need for a better defensive effort and for Brewer to step it up on Durrant.  Amazingly, this actually happened. We're not talking about him being a possession-by-possession lock down type of guy, but if he can be an average performer over the course of a game, his offense is good enough to make this a more than positive trade off.

Last night's game was not without a few typical Wolves blunders.  I almost put Jonny Flynn in the list of positive developments.  Flynn's shot was not falling early last night and he responded by taking only 2 shots in his 2 middle quarter stints while dishing out 5 assists and only 1 turnover.  The Wolves actually played some decent team ball during these two stints.  Unfortunately, Flynn also had his typical bad effort on defense (repeatedly getting burned on simple high screens) as well as 0 assists down the stretch in the 4th quarter while taking (and, admittedly, making) a lot of shots.  This falls in line with a trend we have noticed over the 1st 1/2 of the season. 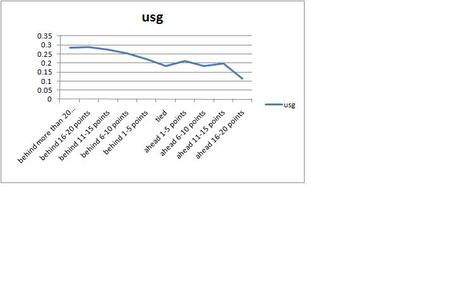 This is a breakdown of Flynn's usage rate in relation to the score of the game.  You can find the data for these sorts of charts with the play-by-play excel sheets found at Basketball Geek.  What we see here is that the more possessions Flynn factors in, the more the Wolves tend to be behind.  This supplements what we have known about his +/- and on/off numbers all season long.  If I were to look into this more, my first goal would be to figure out what types of possessions Flynn uses in his high usage rate areas.  Are these the situations where he jacks up a ton of shots?  Do the Wolves have more close-to-the-bucket opportunities in his low usage situations?  Do they have more assisted buckets in the low usage situations? And so on and so forth...

On the other hand, Ramon Sessions carries something a bit less trendy: 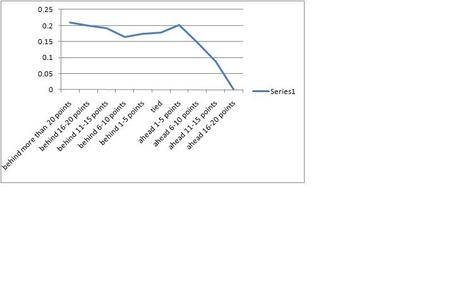 The kicker here is that Sessions plays with the backups and he simply doesn't have a large enough sample size of possessions where the Wolves are up by 6 or more to make this really work.  Everything to the left of that line shows that he has a fairly consistent usage rate no matter what the score and that he, for a lack of a better phrase, knows his place a bit better than Flynn.  Again, the next step here is to look deeper into the score sheet and figure out some situational data.  We know that Sessions carries better rotational scores, better +/- numbers, and he's a better defender compared to Flynn.  We also know that there appears to be a correlation between Flynn's usage rate and the team's +/- that doesn't exist with Sessions.  If Flynn is going to be The Guy at the point, perhaps a more detailed study of his usage rate in relation to the team's scores could yield some interesting answers and help him become a more functional player at the position. I'll never agree with the pick and I'm pessimistic about his chances to work in the long run (especially with Rubio sitting there), but I want the guy to succeed and this is the sort of approach I want to take to critiquing his game from here on out.

Random thoughts to finish this off:

Well, that about does it for now.  What caught your eye during the game?