Share All sharing options for: Nostrapopanus (An open thread for despondent Vikings fans) 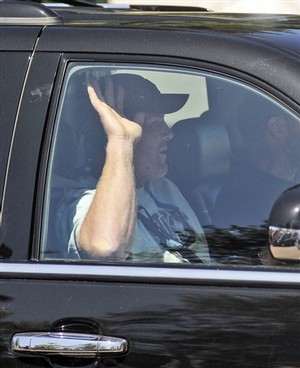 Don't say I didn't warn you (from August):

I did grow up as a fan of the Purple and one of my favorite most notorious sports memories is watching the 1998 NFC Championship game with a bunch of fellow Minnesotans in the wee hours of the morning while being stationed in Korea.

A few years later 41-0 ended up being the last straw.  The Vikes were simply too much of an emotional investment for a league I didn't really like and a sport I didn't really understand.

My question for all of you is this: Will finding a spot on the Purple/Favre bandwagon pay off in the long run because the crushing manner in which the Purple will lose will end up being an important part of the Minnesota Identity for a long, long time. Who wants to miss out on that level of collective misery?

Not this guy.  Hell, I may even bring the kids along for the ride.  I'm betting that the way in which the Vikes exit the season will be one of those "where were you" moments that will be part of the basic test of Minnesotan citizenry for the next 50 years.

Let it all out.