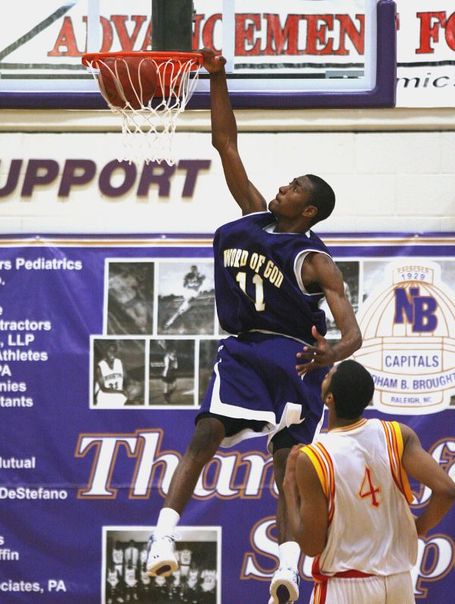 Folks, it's that time of year again.  Time to start looking at college recruits for this year's draft.  As our long time readers know, we here at Hoopus use something called the Hoopus Score to weigh College Player X against College Player Y.  The Hoopus Score isn't an attempt at a be-all/end-all one-stop score for judging the NBA prospects of this, that, or the other college prospect.  It is simply a starting point for us to talk about which player Wolves fans should keep their eyes on, as well as being an as-close-to-objective-as-we-can-get way of telling you exactly why we prefer Willie Warren to, say, Xavier Henry.

The first year we ran the Hoopus Score it was a single score that took into account various efficiency and per/36 minute statistics.  Last year we monkeyed with the formula and split it into 2 separate scores: efficiency and net production.  The thought here was that we wanted to give our readers a way to view each college player's overall numbers against how efficiently said player posts said numbers.  We also broke up the score into three distinct categories: bigs, guards, and wings. This year we are going to hold off on the net production score until the end of the college season. We are also going to re-scale the score and weigh the efficiency number so as to do away with the three categories.  This year, one score rules all.

To give you an idea of what sorts of statistics go into the Hoopus Score, I use KenPom's site for efficiency stats and Yahoo Sports for net numbers. I take into account things like eFG, OR%, FT Rate, and TO Rate.  I then weigh some of these scores according to category (big, guard, and wings), and add, subtract, and divide them all together for a single overall efficiency score.

In order for you to have some sort of context about how this score works, here is a short list of players from the 09 and 08 drafts and their new, updated Hoopus Score:

For those of you who remember our draft boards from seasons past, you can see that I have adjusted the score to address some shortcomings in our score (for instance, I overvalued offensive rebounds for bigs as well as assists for guards) and I now have Blake Griffin as the top prospect of the past 2 years followed by...well, you can read the list for yourself.

To give you an even better idea of how the score can be viewed in context, and to provide you with a sample of an average (i.e. 15-rated) player or two, here are some numbers from everyone's favorite Big 10 squad:

Again, the big goal this year was to provide a single weighted score across guards, bigs, and wings with 15 being as close to average as I can get.  There are some weaknesses with the score that I still have to take care of in future years; namely, figuring out a way to weigh conference/schedule strength and broad pace, scoring, and defense average differences in the NCAA from year to year.  Conference/schedule differences is my first priority and I hope to have that component in place in next year's score.

With no further delay, here are this year's scores:

First, this is our first list of the season and I want your input of players I should be adding to the list.  This is simply a first shot at the draft board and I took the biggies off of DraftExpress' big board.  If you have a player who you want scored, simply leave a name in the comments and I'll add him to the list.

Second, the Charles Garcia number is, to my best guess, a prime example of the score needing a way to adjust to conference strength or, in this case, strength of schedule and pace.  Seattle U is unaffiliated and they play at a blistering pace.  Garcia has some wonderful numbers but he is doing so with a relatively weak strength of schedule and about 10 possessions more/game than your average Big 10 contest.  In other words, there might be some pretty good reasons why he is carrying a FTRate above 80 other than him simply being a stud.  Also, it appears that he has some off-the-court issues and that his high usage rate is used for both good and evil.

Third, getting around to the actual players, most of the top end players all have some fairly significant strengths and weaknesses.  John Wall's biggest dings are rebounding and turnovers but he combines scoring, shooting, and facilitation better than anyone else in...well, I can't find another guy with his combo of scoring and passing on KenPom's site.  If he can address his high turnover rate (essentially 1/4 of his used possessions, and he carries a high usage rate), you can ignore his rebounding because he does so much in terms of steals and blocks relative to his position.  In other words, if he improves something we all think he should be able to improve, he'll be absolutely insane.  Adding in his height and length and you can begin to see why he's viewed as the top prospect in this draft.

Charles Garcia is a free throw monster.  He draws more fouls/40 than anyone else in college ball and this means his FTRate is way, way, way, way up there (80.3 as I write this).  Evan Turner has an absurd assist rate for someone his height.  He doesn't get to the line as much as he used to but he does draw fouls at a fairly high rate and the FTAs should take care of themselves if he continues to put up a high usage rate when he returns.  DeMarcus Cousins is putting up some silly rebounding and scoring numbers in his young career.  The caveat here is that he plays in less than 1/2 of his team's minutes, but when he does get in the game, he puts up the 2nd highest usage rate and 3rd highest shot rate in all of college ball.  In other words, dude is a black hole...a big one.

The biggest surprise on the list was Xavier Henry.  He has a fantastic eFG for a guard/wing but he takes a ding for his rebounding, so-so assist rate, and average ability to get to the line/draw fouls. That being said, he can really stroke it from outside and he has legit size so he may be the type of player where you can overlook the rebounding and foul shooting related activities.

All things taken into consideration (i.e. guestimating conference strength, schedule strength, off the court issues, need), if I were putting together a briefing for the Wolves my draft board would look like this:

John Wall shoots to the top because I believe the turnovers will eventually go down and his combo of scoring, passing, height, and length is just too impressive to pass up on.  Evan Turner is exactly what the Wolves need at the 2/3.  Sanders fits the sort of athletic 4/5 backup mold we have been talking about on this site for almost 3 years (he's 6'9" with a 7'6" wingspan).  Aldrich is a long-time favorite (with legit hugeness) and Henry and Johnson both can provide legit size and talent on the wing.  Lance Stephenson is an interesting name to keep an eye on.  He seems to be something of a headcase and he had a hard time finding a college home despite having great size and being the all-time leading scorer in NYC history.  That being said, he's a natural scorer and his play has been something of a surprise early on in the college season.

This draft is being pitched as a deeper affair than last year's contest and at this point I have to say that I'm somewhat skeptical.  Wall is probably the most talented guard to play college ball in the past 5 years but he isn't without flaws.  Turner is a very nice and dedicated jack-of-all-trades who I think will have a long pro career.  Beyond that, I don't think this year's class has a whole lot to offer beyond some so-so wing talent and some nice backup bigs.  In hindsight, last year's point guard fiesta was probably a bit better than we first thought.

Well, that about does it for the first edition of the 2010 Hoopus Draft Board.  What say you?

PS: Here's hoping this is the last year we have to run one of these before the All Star break.