Too close for comfort

Share All sharing options for: Too close for comfort 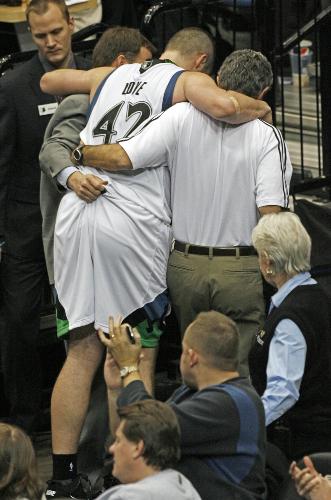 For a moment there it looked like the Wolves' 2nd year player curse was in full effect and that Kevin Love and his knee were going to follow in the footsteps of Rashad McCants, Randy Foye, Corey Brewer, and Al Jefferson of going down for an extended period of time with a lower-body injury in their 2nd season with the team.

Thankfully, it appears that the Big Piranha's injury was more Paul Pierce than Al Jefferson and not only were we fans spared the sight of crying and wheelchairs, but the thought of a non-Love remainder of the season as well.  I can't tell which idea is more terrifying.

Since this is a shoveling morning here in southern Minnesota, today's game wrap will be a short affair.  Last night's tilt started out dangerously close to a Korean cooking game.  As the game inched towards a 20 point differential in the first half my only thought was whether or not I would roll with a bean sprout or a fernbrake side dish recipe.

The only thing that kept my interest was that Al Jefferson appeared to be having something of a game and no matter how far the Wolves were behind, they were a) playing the Warriors and b) playing Nelly's Warriors.  The Wolves suck but so does Golden State.

I suppose this gamble paid off as I was (I guess) treated to two decent 2nd half runs that knocked the score well down into the single digits but ultimately the Wolves were done in by poor shooting (no surprise), turnovers (surprise), Corey Brewer fouling out with 6 minutes to play (surprise), and Jonny Flynn's worst game as a pro (not really a surprise).

Flynn had no good, terrible, awful, horrible, close-your-eyes-and-look-away performance last night; missing his first 10 shots from the floor, facilitating for no one, not hustling back in transition, and playing matador defense that, along with crippling 2nd season injuries, is becoming something of a tradition for Timberwolf guards.

I think I've made my thoughts about Flynn pretty well known on this site (wrong pick and he's showing very little promise as a point guard) but I think last night's performance was soooooo horrible that it can't be looked into too much because its level of stinkitude transcended anything relating to his game rather than simply providing outsized examples of what he does (and does not) bring to the table.  Rookies have terrible nights, especially point guard ones.  Ultimately, Flynn is probably with this team for the long haul and I hope he develops and I hope that I am wrong about his selection and his potential at the point.  Last night's game was, thankfully, an outlier....so far.

As bad as Flynn was, Al Jefferson had his best game of the season, scoring 26 points on 18 shots, mostly from within 10 feet of the basket.  Once again, a good game by Big Al raises just as many questions about the team as it answers.  The Wolves lost the game, they were down by significant amounts throughout the better part of 3 quarters, the offense wasn't exactly bursting with movement, and...did I mention that the Wolves lost the game?

Jefferson is clearly improving as a defender and a willing teammate in a 1/2 court setting.  By all accounts he's working hard to fit into Kurt Rambis' offense and he is working to overcome a horrible knee injury (also a 2nd year curse injury).  That being said, I can't remove the thought from my head that he simply isn't the type of player that was meant to play in a motion-based offense that rewards creativity and solid wing play.  He's a pound it down to the low left block kind of guy and even in situations where he does end up passing the ball, it typically comes after a few seconds of jab steps and tunnel vision.  I want it to work but, like I have said before, the action this season has finally convinced me that the Love/Al partnership is not long for this world.  For a football analogy, Big Al is Brandon Jacobs to Kevin Love's Brian Westbrook and the Wolves are trying to run a pass-first attack rather than a run-dominated offense.  Unfortunately for the Wolves (and this analogy), the NBA is not a league where a two man/change of pace attack really works out.

OK, jumping aside from the game wrap, I wanted to point everyone in the direction of Kelly Dwyer's excellent article on Gilbert Arenas:

It should warn people that guns aren't cool, aren't needed and a borderline anachronism at this level. I don't want to hear the nonsense about "protection." A gun wouldn't have helped Sean Taylor, caught half-asleep and in the darkness. It wouldn't have helped Eddy Curry(notes) and Antoine Walker(notes) as they were caught by surprise and by a hoard of criminals all at once. And it certainly didn't help Gilbert Arenas, in any way.

You know where Gilbert Arenas comes from? One of the more affluent neighborhoods in the Washington, D.C., area. He's been there for a while. That's his reality. If he tries to tell you anything else, it's because he doesn't think that much of you.

If the man wants to make the whole world go away and find shelter on a court, I'm sure there's a gym somewhere that could use someone worth listening to. If the Wizards eventually dissolve his contract because of the moral turpitude clause, there might be a European team or a minor league team in which he can easily find personal refuge.

Would the price be to Gil's liking? Probably not. And based on what little I know about Gilbert Arenas, I'm sure that might be enough to sway him to stay home and wait out this suspension. Pity.

There are two things that really get me about the whole Arenas episode.  First, imagine if you will that there existed a team called the Washington Gropers.  Unfortunately, due to the large number of sexual harassments in the metro D.C. area, the team's owner decided to change the name of the team to the Wizards along with donating a lot of his own money to help combat the problem of sexual harassment.  A few years later the team formerly known as the Gropers signs a young man to a $100 million contract.  1 year after signing this huge deal, this former Groper was caught in a sticky situation at a strip club where he admits to grabbing the behind of an exotic dancer.

After a few days of trying to play the situation off as a joke, the player's lawyer issues a statement assuring all of us that the $100 million dollar face of the franchise understands the seriousness of the situation, the history of the organization, and the importance the former owner (who just passed away, btw) had placed on eliminating sexual harassment.  A few days after issuing this statement, the $100 million dollar face of the franchise gets his teammates to play along in a pre game ritual that appears to include a mock up of a pole dance.

Second, the gambling angle is getting completely glossed over in this story.  The reason why guns were involved in this little incident is that multi-millionaire athletes were betting tens of thousands of dollars on a card game.  Not only that, but the multi-millionaire athletes on the team formerly known as the Bullets seem to think that the mixture of gambling and guns is something of a joke: 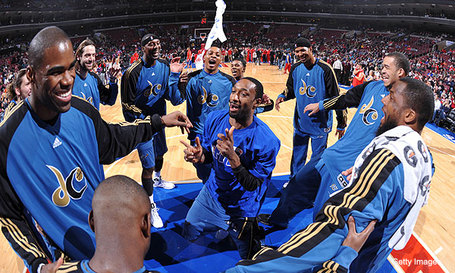 I love professional basketball.  I'm finding it harder and harder to root for a league where stuff like this happens.  From contracts to cap space to unmovable assets to guaranteed deals to a lot more, I'm finding it very hard to relate to a league that is thousands of miles removed from my pocketbook and tax bracket, and not the color of my skin.

PS: I know that other sports have multi-millionaire athletes but they don't have the NBA's toxic combination of guaranteed contracts, cap rules, and overall economic forecast.  What other sport has fans who track expiring deals with more interest than box scores?  Last night the Wolves did not dress an expiring contract who makes over $80,000/game.  Looking at the empty seats in the arena, I wondered how a league that had to line up an additional $200 million line of credit is going to continue on its present course.  Oh well, I suppose if anything this just proves once again that the NBA is more like real life than any other sport.  The gap between rich and poor is expanding by the day and bubbles are being impossibly inflated.  Whatever it is, it makes people who make less in a year than what Mr. Expiring Deal makes drinking Gatorade for a single night nervous.