Share All sharing options for: No Korean Recipes Here 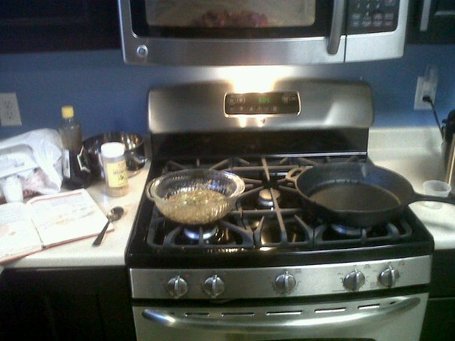 It wasn't quite a Korean Recipe Game, but with the Wolves/Indy game being unavailable on any sort of TV or illegal stream, I turned on League Pass Audio while the family and I cooked some bulgogi and then finished things off with a carrot cake.

The only thing I can say for sure about the game is that Indiana has some sort of miracle hospital that can cure kids with tumors wrapped around their hearts and that Indy's color analyst really wishes that things would just stay the same.  Also, the entire Indianapolis media market is run by Kroger's and if you want good wings and ribs, you just have to hurry your ass on down to Conseco Field House to get your grub on.

If anyone out there was able to see the game in their mind's eye, drop a line in the comments.  Otherwise, we'll just have to wait until the Syracuse Bowl on Friday.