He's 6'8" tall, and weighs about 240 lbs. He had a remarkable freshman year of college and was a prized draft pick in the NBA. He can score from anywhere on the floor, rebound, distribute, handle, and....when motivated....defend.

In his second year in the NBA, he struggled. His shooting was inefficient. His 3pt% dropped into the 20s. He showed no marked improvement on the glass, as a playmaker, or as a defender. He shot too many jumpers....didn't put the ball on the floor or attack the rim enough, didn't draw enough fouls....didn't use the full range of his skills. And as the season wore on, fans stopped buying his hype and started questioning his talent. 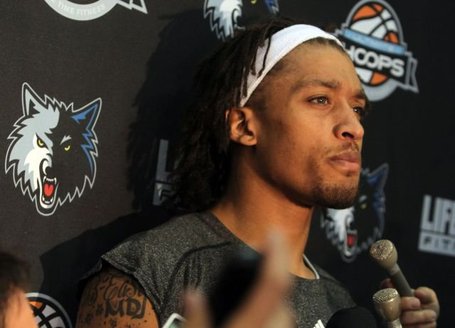 No, I'm not talking about Michael Beasley.

Carmelo, in his sophomore season, was about as inefficient a player as you could find. He took over 17 shots a game...10th most among all players that season (would have been 9th most in 2010).....but hit only 43% of them, and his 3 point shooting dropped to a dismal 26%. His minutes went down from the year before, but his turnovers stayed the same (and his TO% went up). And despite his usage rate increasing, his rebounding, assist, steals and blocks percentages all stayed the same or declined. His eFG% was just 44%, and although his team increased their win total in the regular season, the excitement from the previous year's playoff breakthrough (in which the Nuggets got annihilated by our own Timberwolves) was replaced by trepidation as the Nuggets this time got annihilated by the Spurs.

The Nuggets tried to address the issue externally, fighting to get support players like Kenyon Martin, Marcus Camby, and Nene to stay healthy, and ultimately trading for Allen Iverson in 2006.

Head coach George Karl decided to do things differently, and address the issue internally. He knew that the issue was actually very simple: Anthony was just taking too many jump shots. So he created what he called the "10-10-10 Rule".

"If he [Anthony] gives me ten shots from the paint and ten free throws, he can take ten jump shots." 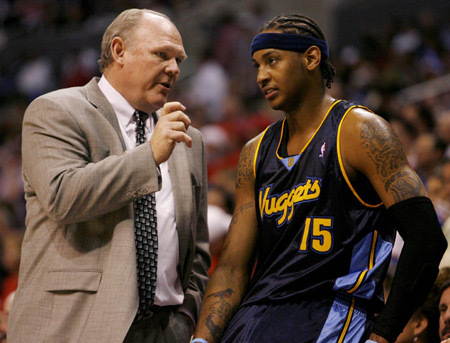 It wasn't about production. It wasn't a challenge to average 10 points, 10 rebounds and 10 assists. It was about effectiveness. The 10-10-10 Rule wasn't made to make Melo a bigger player....just a better one.

By 2007, Carmelo was shooting 47%. By 2008, he was shooting nearly 50%, including 35% from three. His rebounding picked up to 7.4 rpg, and his assists nearly hit 4/game, while successfully turning his asst/TO ratio into a positive. His eFG% broke 50%, and although his usage rate declined, his reb%, asst%, and steals% all increased.

By 2009, the Nuggets were in the Western Conference Finals.

The 10-10-10 Rule is elegant in its simplicity. It doesn't demand intricate playcalling. It doesn't require hours of extra work in the gym or watching game tape. It isn't a new philosophy or system, or an indictment that the player has been doing something wrong. It's a challenge....one that can met by the player in his current situation playing his current system with his current teammates. All it requires is diversification.

George Karl knew that the easiest way to make Carmelo a more effective player would be to simply get him to use all his skills, rather than just his shooting one. Mix it up a bit. Be less predictable. Get the defense on its heels and get some easier looks in the process. Don't add extra jumpshots to the morning workout routine. Don't perfect shooting form, or dictate spots on the floor to shoot from. And don't turn it into a criticism of your sometimes tempermental, often times mercurial star player. Don't say how....just say what.

The beauty is in its indirectness. It solves the problem without actually addressing the problem....or in many ways, even saying there is a problem. Like a river that runs around a rock, rather than through it. George Karl didn't tell Carmelo to play better. Just play differently.

Michael Beasley's similarity to Carmelo Anthony goes beyond their second year numbers (which really are eerily congruent). They play the same game....or at least, used to.

Beasley is 6'8" high-volume jump shooter with underutilized handles and an unrealized post game. He can score from anywhere on the floor, rebound, distribute, handle, and....when motivated....defend.

And like sophomore Carmelo, his offense is highly dependent on one particular skill.

Shortly after the Wolves acquired Beasley, this video got posted, and a comment was made about something that I honestly would have never thought to point out until after the fact:

"He sure takes a lot of jump shots"

What better way to get the guy with Melo's game to play more effectively than to use the strategy Melo used?

Being a "gunner" isn't inherently a bad thing. Every team needs a go-to scorer, and every good team has a guy somewhere on the roster that breaks from the offense and fearlessly puts up shots for better or worse. The Spurs have Manu Ginobili. The Celtics have Paul Pierce. The Magic have Rashard Lewis. The Thunder have Russell Westbrook. The Lakers have Kobe Bryant. Believe me, Kobe Bryant does not always follow the game plan.

Kurt Rambis, in just 5 preseason games, has already commented several times on how Beasley "freelances too much". I say, not a problem. He's not playing selfishly. He's not disassembling the system. I can't even count the number of times I've heard Gregg Popovich take Ginobili to task for throwing the playbook out the window. But in the end, Pops knows that's what makes the Spurs successful. That unpredictability. That out-of-nowhere offensive blitz. That X-factor.

There's no question Michael Beasley is our most talented scorer. None. The difference between what he is capable of doing on offense compared to the rest of the roster is a gap on the magnitude of the Grand Canyon. He is literally the only player we have that has a prayer of being a #1 option. Of consistently creating his own shot and making it. 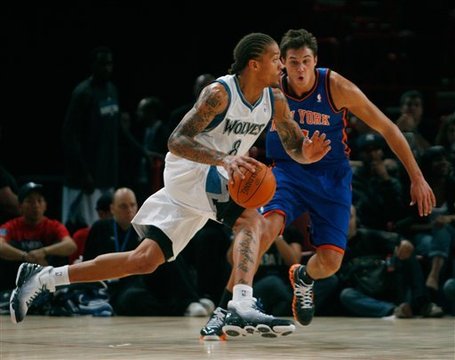 I have no problem with Beasley being a high-volume shooter. In many ways, I demand it. All I ask is that he take the most effective shots possible, and that's why I think he needs to be a 10-10-10 player.