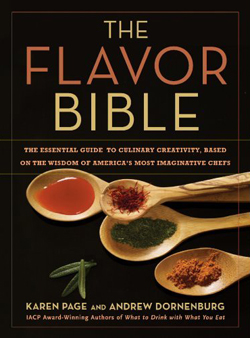 It obviously wasn't a Korean Recipe Game against the Kings, but the 2010 season opener did offer some juicy tidbits that are best explained in the kitchen.

First of all, if you don't have the Flavor Bible in your kitchen book collection, you need to get on it...and in a hurry.  Once you move beyond basic recipes, your first goal as a budding chef is to understand which flavors go with one another and which ones to avoid.  There are classic combinations (mint and lamb), counter-intuitive pairings (avocado and lobster), do-it-all workhorses (bacon and anything), and outright monstrosities (tuna and butterscotch).

The game against the Kings was both a feast and an assault on the basketball tastebuds.

At the end of the day, tonight's game was frustrating on a number of levels.  On one hand, we got to see a few key ingredients do their thing while some subtler flavors got in some serious work.  On the other hand, there were some seriously messed up entres out there.  I know it's just one game, but one of the big questions I have with this team is this: Can Rambis cook the ingredients that Kahn brought home?
The Wolves have clearly upgraded the middle of their roster but does that matter?  Does it matter if you still don't have A1 talent? This year's Wolves will be an interesting case study: Can a team of well-functioning mid-level players win or do you need a great player?  This team still has massive issues with both the ingredients and the cooking.  That being said, it was nice to see them out there again and guys like Wayne Ellington, Anthony Tolliver, and Luke Ridnour are going to make all of the losing easier to swallow.
Random thoughts:
Best part of the night: It was fantastic.
Well folks, that about does it. We'll have links to GameFlows and stats tomorrow.
What say you?