The NBA: Where Jedi Happens

Share All sharing options for: The NBA: Where Jedi Happens 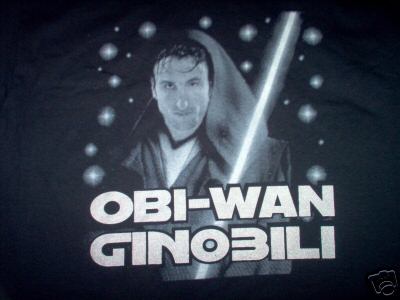 The NBA has been using "Where Amazing Happens" for a couple of seasons now, but it seems these days the league has gone the way of the Jedi Council.

There is no emotion, there is peace basketball.

That appears to be the intent behind the NBA's new(..erish) technical foul policy. And while a cleaner, quieter, less mouthy brand of basketball sounds nice in theory (and certainly makes for a more marketable brand), is curbing the complaining really a helpful....or realistic....thing for the league to do?

David Stern has always had a love-hate relationship with his referee corps. On one hand, he grants them tremendous....some would say unilateral....powers in calling NBA games. On the other hand, he very rarely stands by them when they choose to exercise those powers in an unpopular way. 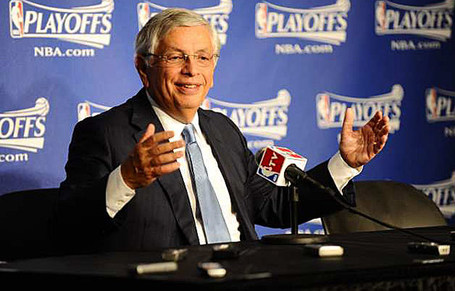 In what has been a massive media oversight thus far, very few journalists have acknowledged that this isn't the first time the NBA has vastly expanded the grounds for its players to draw technical foul calls. In 2006, the league instituted a "zero-tolerance" that allowed the referees to whistle technicals for any unsportsman-like behavior, even that which wasn't directed at the refs themselves. During the first half of that season, the number of technicals called more than tripled, igniting a feud between the league and its players that ended with the Players Union filing an unfair labor practice charge with the National Labor Relations Board, and the NBA ultimately scaling things back to the way they were by the trade deadline.

Now the NBA has ramped it back up again. Some of the offenses that are now grounds for a technical include:

It's popular to say that the league is taking things too far with this, and in some ways, that's true. It's also true that players should focus more on the game and less on posturing as if the whole world treats them unfairly after every foul call or non-call. The question in regards to this is, where is the line between acceptable and unnecessary?

Take a look at the technical Kyle Korver drew in Chicago's preseason game against Toronto, and make the call:

Using that sequence as an example, what the league is trying to say is "don't worry about the referees or the calls, just play the game". Did Korver need to send a message to the refs by claiming he got fouled? No. Did he do anything disruptive or hostile by sending one anyway? No.

What is disruptive is stopping the game to whistle a technical on that play. The league is trying to send a message of its own to the players, with the hope that these types of behaviors stop happening in the future. Will it work? Maybe, maybe not. But first and foremost, the stoppages of play are hurting the game. If there's something fans want to see less than a player screaming and swearing for two minutes, it's a game dominated by whistles.

When looking at the technicals that have been handed out in this early part of the season, it's very difficult to say that the league is curbing excess complaining, because nothing seems to be in excess. Almost all the technicals called during preseason and the first week of the regular season have been over things that you'd never see or hear sitting in the stands, and the number of these sorts of calls being made is starting to reach an absurd level.

Jason Williams: technical for saying the ball went off a Wizards player. Jason Williams: second technical and ejection for asking why he got the first one (and this happened with 58 seconds left in a blowout game) Grant Hill and Reggie Evans: double technicals and ejections for slapping each others' butts after a foul call.

Or if, perhaps, you're looking for a call that hits a little closer to home, then consider this.

During the Wolves' season opener against the Kings, Darko Milicic swatted at a shot after a whistle...the same thing Kevin Garnett was notorious for doing during his career here in Minnesota...and got T'd up.

The Timberwolves lost the game by 1 point.

Yes, those numbers include things such as 3 second defensive violations (in which Nikola Pekovic could account for a dozen technicals just by himself) but still, that's a very significant jump.

But here's the real damage: yes the whistles disrupt the game and annoy the fans, but if you look at the big picture, there's a much bigger issue.

Corey Brewer? Reggie Evans? Jason Williams? Deron Williams? That's not exactly a list of hotheads. Darko Milicic is understandable....after all, we're talking about a guy who ripped his jersey in half once....but when's the last time Grant Hill caused trouble for anyone?

In 46 regular season games so far this year, there have been 43 technicals called just on players, and check out some of the names. Derek Fisher. Kevin Martin. Jose Calderon. Shelden Williams. Caron Butler. Rodney Stuckey. Zydrunas Ilgauskas....twice. Among rookies who have already been T'd up? Blake Griffin, Evan Turner, Derrick Favors and Armon Johnson. Noticeably absent from that list: DeMarcus Cousins (which, by the way, is much more a statement on the randomness of the refs' interpretation of the new rule than any new angelic disposition Cousins may have found)

So in a very sad and ironic way, the new technical rule isn't actually decreasing the number of out-of-control complaints from players who are usually overly-demonstrative. It's just villainizing players who otherwise have sterling reputations and model citizens.

It brings to mind, for many, Tim Duncan ejection in in 2007 for laughing about a foul call from the bench:

If situations like that become the norm, the NBA will never recover from the fallout.

Further, NBA referees already have a dubious reputation for unfairly calling games. This is a huge problem because, for one....if you really think about it....it would be a lot easier to fix NFL games through referee action. And second, anytime your officials come into question, the credibility of your whole sport takes a hit. Handing the refs a league mandate to make calls that look ridiculous and petty in the eyes of the fanbase doesn't help at all.

For a league that claims this move is about "improving public image", the end result couldn't be further from what it wanted.

However, the biggest issue with the new technical policy is how it aims....intentionally or not....to shut down player emotion.

Basketball is a very active sport, and extremely competitive at the professional level. For NBA players, it isn't a hobby or passion....it's life. Things move very quickly and very physically, and when competition gets thrown into that mix, it's inevitable that things are going to get intense.

A clear example of this would be Deron Williams. During Utah's game against Phoenix, Williams made a pretty backdoor cut and threw down a huge dunk....and got called for a technical for showing some emotion after it:

He's the scenario, if you're Deron Williams. Your team got annihilated in the season opener by the Nuggets, and is now losing to the Phoenix Suns in its second game. You've got new teammates who aren't running the plays you want them to (YouTube "Deron Williams Not Happy With Gordon Hayward"), you've hit just one shot in over two quarters of play, and you finally get an easy one to go down. Of course you're going to show some emotion.

Williams wasn't complaining about anything on that play. He wasn't "disrespecting the game". He was just venting a little frustration at having been blanked so far in the contest. Yes, he did wave his arm. Yes, he did touch the ball. But what harm did he really do? He didn't stop the game. He didn't punch the ball into the stands. There was nothing remotely negative or malicious about his actions, so why treat the situation as if there was?

Basketball isn't a thinking activity; it isn't chess. The best NBA players play as much by instinct as they do by thought. NBA players are competitive people, but people nonetheless, and it's completely unreasonable to expect them to not have strong reactions to what happens on the floor.

In a strange way, the league has extended its love/hate relationship to the players as well now: they demand intensity and competitiveness and passion from them, but now punish them for showing the natural reactions that come from it. 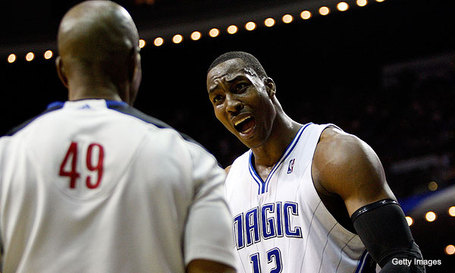 When the games begin to get serious....when playoff spots are on the line, or playoff games in the balance....the league will do far more harm than good by whistling techs on adrenaline-fueled players that could end up deciding games. If it's game six of the conference finals, with the score tied and 20 seconds to go, the last thing anyone wants to see is Kobe Bryant getting T'd up for showing a little frustration on a foul call. That's a technical free throw that could decide the game. It could mean Bryant is ejected. Maybe even suspended for game seven. All because Kobe was being human, and displayed some emotion in a game and a sport where emotions run high.

If the league wants to cut down on the complaints from the players, that's fine, and maybe even prudent. But it has to be realistic about the way it happens. There is a difference between disbelief and derogatory. There's a difference between frustration and hostility. And there's a difference between players losing their tempers, and players showing the same emotions any of us would were we on the court. I agree that NBA officials take more abuse than they should, but you can't fight fire with fire on this. Turning players in un-emotionless Jedi will hurt the referees....and the NBA as a whole....far more than the complaining does.

After all, Obi-Wan Ginobili's the only real Jedi in the NBA.