If there's any one good thing about the Wolves dropping close battles to superior teams, it's this: games against teams of equal or lesser talent start feeling easy.

Tonight's contest wasn't a disparity in ability so much as a disparity in mindset. The Pistons aren't particularly less talented than the Wolves. But where Detroit is mired in a losing atmosphere that has sapped the confidence of even former champions Rip Hamilton and Tayshain Prince, the Wolves have been full of positivity, seeing themselves stick with some of the top teams in the league and confident that a major breakthrough is just around the corner.

The first half of the first quarter non-withstanding, the Wolves played a very complete game tonight, getting it done on both ends of the floor. For really the first time this season, the Wolves won a game off of performances that can be reproduced on a nightly basis. This isn't a red pill versus blue pill scenario. The Wolves executed on offense and covered the floor on defense, that's all there was to it.

The Wolves shot 52% tonight, riding strong shooting performances from Kevin Love, Luke Ridnour and Wesley Johnson. On the other side of the ball, the Wolves held the Pistons to just 38% shooting, mostly thanks to Corey Brewer's incredibly disruptive presence and Darko Milicic's absurdly good interior defense. 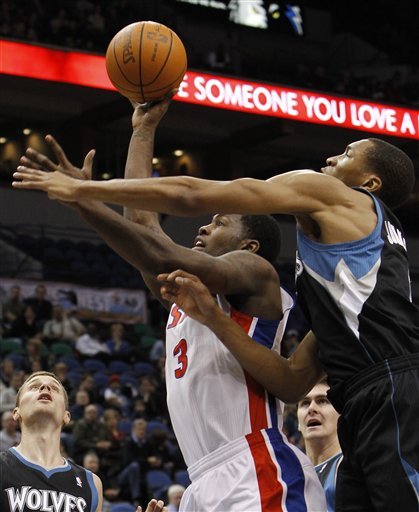 'Sota is now consistently beating the bottom-feeder teams....the Detroits and Clevelands and Sacramentos of the NBA. That puts them a level above, could be considered faint praise, but should be considered progress. This team is better than its record indicates....better than a lot of teams with better records, particularly those in the Eastern Conference.

Minnesota's early schedule has been a trial by fire. Already, the Wolves have faced the Magic, Heat, Mavericks, the Lakers twice, the Spurs twice, and the Thunder twice. And while they did drop all those games, the mere fact the team was consistently playing against that caliber...and lately has been making real contests out of them...has put the Wolves in a very competitive state of mind. So when a team like Detroit rolls into town, things feel perhaps easier than they otherwise would or should. The Pistons simply don't play at the same level as the teams 'Sota has become used to facing. They don't put arms in the passing lanes, bodies in the driving lanes, shots in the hoops or athletes in the sky the way the Wolves have become accustomed to seeing, and suddenly the court feels open, shots feel uncontested, and things that were difficult become easy because the Wolves learned how to do them against much stronger/bigger/faster/better competition. The Wolves put that on display against the Cavaliers and again tonight.

Timberwolves play again tomorrow at Chicago in what promises to be a much much much more difficult contest. Joakim Noah is to the paint what Corey Brewer is to the perimeter, and the newly acquired (and finally healthy) Carlos Boozer isn't too bad either. Oh, and they have that Derrick Rose guy as well. But what's really important, of course, is Martell Webster will be back for the Wolves. So don't miss it.