Sometimes things just catch up to a team. The Wolves definitely looked like a squad playing shorthanded on the second of a back-to-back on the road. They played uninspired basketball the entire night, while the Bulls held what ultimately turned into a practice session.

You can definitely see Tom Thibedeau's hand in the way Chicago plays. Slow pace, exacting execution, and stifling defense. The Bulls use the same defensive formula the Celtics and Rockets used when Thibs was an assistant with those ballclubs: take one dominant defensive big man (Yao, then KG, now Joakim Noah), put him in the backfield, and drive everyone into him. Chicago did a terrific job of forcing the Wolves to grind it out in the halfcourt and do everything middle where the long arms of Noah and Taj Gibson and the big body of Carlos Boozer could close down the floor. Like the Celtics, the Bulls don't do much with flash, preferring to turn games into trench warfare where they can use physical play and defensive communication to force their opponents into making mistakes. The Bulls formed a wall of red and white jerseys on defense tonight, and that's all the Wolves could see. 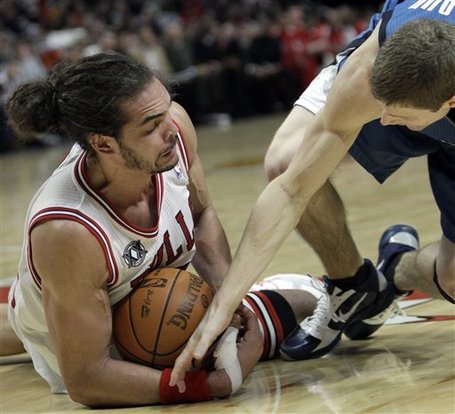 The Wolves, for their part, played into that strategy to a T, walking a slow pace, committing 20 turnovers, and missing their outside shots. When Darko checked out early with 2 fouls, 'Sota lost all flow on offense and communication on defense, and never recovered. Other than Love (23-15) and Beasley (16-6), no one for the Wolves put together a competent ballgame. Ridnour had 8 assists and just 1 turnover, but his shot selection was questionable again. Brewer and Ellington shot a combined 6-17. Pekovic committed 6 turnovers all on his own....an unacceptable number for a center...consistently lost his man on defense and grabbed just 1 defensive rebound in 24 minutes of play.

There's certainly a level of effort that the team is expected to put forth in every game, and the Wolves tonight didn't meet that standard. But they also are missing a lot of depth (Webster, Flynn, Tolliver) and have played an incredibly difficult schedule both in terms of the level of competition and sheer number of games played. The Wolves have already played 12 games against the top 10 teams in the league...literally half the schedule so far....and their 24 games to date trails only Toronto in number of contests played so far.

The good news is the Wolves have a long weekend off to rest their legs now, and will likely be getting both Jonny Flynn and Martell Webster back for Tuesday's tilt against the Warriors.