"It's a Game of Matchups"

Share All sharing options for: "It's a Game of Matchups"

The Warriors subscribed to that philosophy and made the most of it tonight. The Wolves.....did not.

The Warriors are a better team than they get credit for. They have a reputation....largely because of Don Nelson...of being a chaotic, undersized club that only cares about playing offense, and that isn't true anymore. Golden State has a very balanced team this season, with a lot of players that can go both ways and do a lot of things on the court. David Lee, Dorell Wright, and of course, Monta Ellis.

They also have a reputation for being a very young team, which is true from an age perspective, but as Chad Ford likes to say over on ESPN, it's not age, it's mileage. David Lee and Monta Ellis are both 5 year veterans; Andris Beidrins and Dorell Wright are 6 year vets. Despite the odds, this is a well-put-together team that probably should be considered a step above the Wolves. They have more experience, better balance, and a legitimate go-to scorer who has gotten to that level of delivering every night. 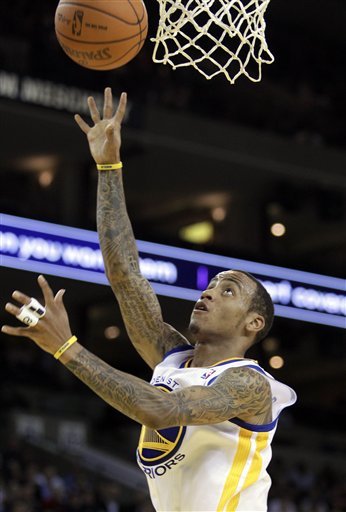 What the Warriors did tonight was exactly what Jim Pete talked about. They targeted the Wolves' weakest defender (Luke Ridnour) and went at him. They targeted the Wolves' weakest shooter (Corey Brewer) and let him shoot. It was a very difficult circumstance for the Wolves to get around, because it happened that our worst defender was matched up against their best scorer in Monta Ellis. That more or less necessitated our worst shooter to be on the floor to defend him. But the mismtach there then left our point guard on the much bigger Reggie Williams, who made the Wolves pay by shooting over them.

The end result was a Golden State starting backcourt that outscored Minnesota's' starting backcourt by an absurd amount....60 - 9. Webster, Brewer and Flynn did their best to make up the difference, combining for 31 points off the bench, but there was no way to overcome the initial deficit.

Monta Ellis, for the second time this season against the Timberwolves, was unguardable. Corey did an admirable job of at least slowing him down to a manageable level, but just getting the ball into Monta's hands in the first place proved to be all that needed to be done. Ellis has an amazing ability to get through the smallest of gaps in the defense and put the ball in the hoop around a tangle of arms. When he could see the rim, he attacked it. When Corey took that away, he got it to teammates that still could.

It was great to see Webster and Flynn playing again....better than great, even. Fantastic. Those two can really help this team in an area it badly needs help: shooting. But if the Wolves are going to reach the next level, the issue that needs to really be solved is the defense. Even though Don Nelson is gone, the Warriors are still masters at creating mismatches to their advantage, and the inability to fight through that is one of the Wolves' biggest weaknesses.

Timberwolves fly to Phoenix tonight to take on the Suns tomorrow.