Share All sharing options for: The Easy Play Clinic

Few point guards make the easy play easier than Steve Nash. The guy is the model of basketball efficiency. Every possession, every play, every time he touches the ball, he's breaking the offense down to as basic as he can get it. The threes rained down on the Wolves, but the core of the Suns' attack was Nash, who held a clinic on point guard play tonight.

Steve Nash is a basketball maestro. There's really no other way to put it. He makes plays that make you wonder if he has a skycam feed embedded in his head, the way he sees the court.

Think about the statline he put up tonight: 11 points on 4 shots, 19 assists. And 6 of those 11 points came at the very end of the fourth quarter when the Wolves played the foul game to try and get the ball back.

That means, at one point, Nash was sitting on 5 points and 19 assists in this game. Nearly a 4:1 assist/point ratio.

What's more, he firmly kept to the mismatch formula the entire night. In the first half, Jason Richardson could not be stopped. He ran off screens, ran to the corners, and beat everyone down the court in transition, and Nash kept it simple. He got JRich the ball. 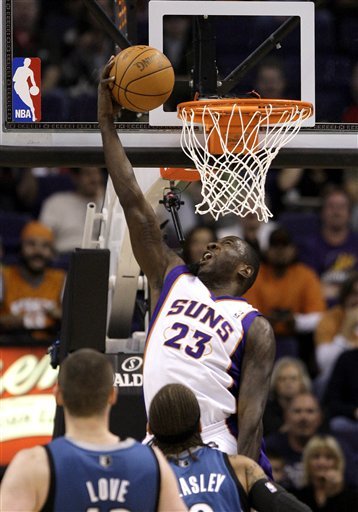 Just like against the Warriors last night, the Wolves tonight took too long to adjust their defense. The Wolves did finally send Corey Brewer  (who's been positively showing signs of actually being the defensive ace he's billed as) after Richardson for most of the second half, limiting him to just 5 points after the break. But Nash again proved his mastery of the ball, adjusting the Suns' offense in response and running the hell out of the mid pick-and-roll with a guy who 'Sota just has no clue what to do with: Channing Frye.

Frye is just killing the Wolves. Flat out murdering. Take a look at his three point shooting in the four 'Sota/Phoenix games last season:

78 of the 85 points Frye has scored against the Wolves over the last 5 meetings have been on threes.

The Wolves have a philosophy of not closing out on three point shooters. Even the good ones. Even the hot hands. Even the ones who score 92% of their points against 'Sota from them. Frye is not an unknown at this point. He made the fourth most threes in the entire league last season. Why the Wolves refuse to run him off the line...or even stand in his general vicinity....is inexplicable.

It's the sort of basic, elementary playmaking the Wolves just haven't had any of recently. Jonny always wants to make the flashy play. Luke always wants to make the predictable play. Randy Foye just flat out couldn't make plays and Marko Jaric might not have been able to even spell "play", much less run them. The Wolves hope Luke can iron things out, and that Jonny will settle down, and that Ricky Rubio will be NBA ready at this level when he finally gets here. But in the meantime, watching Nash orchestrate an easy, flawless offensive attack really hits home to what the Wolves lack at the present.

The Timberwolves take on the Trailblazers Friday, in what Jim Pete has deemed (and rightly so) a must-win game. Roy is hurt. Really really really hurt. And screwed, because really really really hurt is literally all the healthier he can get now. Personally, I think the Wolves not only were smart, but got lucky landing Martell Webster on draft night. Had the Blazers known Roy's knee would collapse the way it has, I doubt Webster would have been available at all. Should be a good contest, so be sure to tune in.