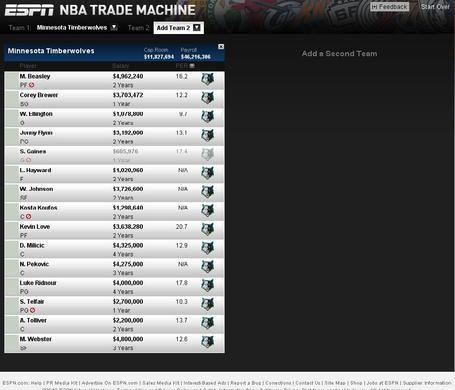 With the Timberwolves finally getting back to full health (sort of...), it's hard to see the team making any major trades in the near future, but nonetheless the team will be shopping around, just like everyone else.

Last week, we took a look at Andre Iguodala and how might potentially fit with the Wolves. While he's probably the best acquisition the team could make between now and the trade deadline, he isn't the only one. There's a long list of "gettable" players on the market who wouldn't be half-bad here in 'Sota. 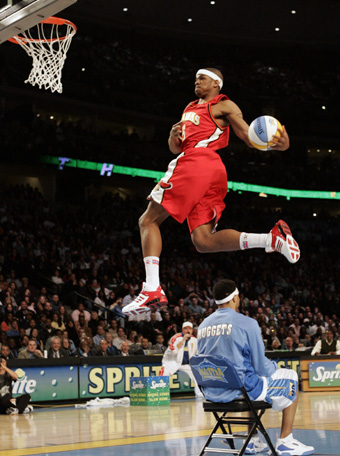 Smith has already been tentatively linked to the Wolves in a proposed deal involving Kevin Love. Along with Iguodala, he seems to be the most likely player to land in 'Sota, should a trade happen.

The Hawks have been searching for over a year now for a true center that will allow them to move Al Horford to his natural power forward spot, where he can really dominate. They also are subtly looking for cap relief with so much money tied up in Joe Johnson, Marvin Williams, and a necessary extension due for Horford soon.

Smith would certainly fit with the Wolves, as a multi-dimensional supreme athlete and defender. He rebounds, moves the ball, and makes a big impact defensively, particularly on rotations and blocking shots. 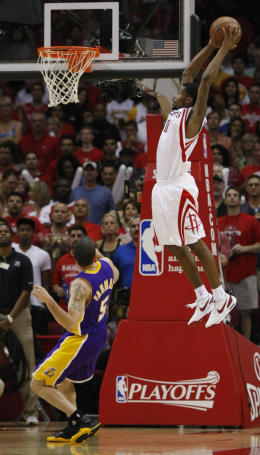 In many ways, Brooks is a prototypical Triangle point guard. He's a shooter and scorer who works well off the ball and makes his living getting shots up before the defense can get set.

I'm in complete agreement with S-n-P in questioning whether the Triangle is the right system for this team to be running. But if the team is really set on it, might as well go all out.

Brooks is unhappy that the Rockets won't talk contract extension. He's also missed a number of games so far this year with an ankle injury, and Kyle Lowry has been more than adequate starting in his place. The Rockets say Brooks isn't on the market, but they also won't commit to keeping him, and with the team struggling much more than expected, there's certainly a lot up in the air that could let the Wolves sneak in and pick Brooks up. 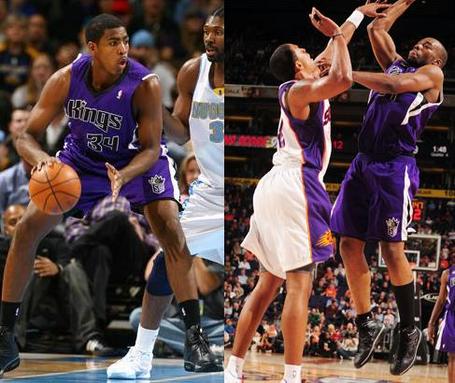 At the beginning of the season, Jason Thompson appeared to be the odd man out of the Kings' frontcourt rotation. But they can't win, and so coach Paul Westphal has gone through a crazy mix-and-match scheme trying to find something that will work. Landry was moved to the bench. Then Thompson became a starter and Landry was out. Now Dalembert is barely playing. Next thing you know, Dal will start again and both JT and Landry will be out in favor of Darnell Jackson.

What's certain is that one of these two will be available at the deadline. The Kings just have too many players for too few minutes.

Both Thompson and Landry have played very well when they've been giving real minutes. In their respective starting roles, Landry has averaged 12-6 in 30 minutes per; Thompson have averaged 10-7 in 25 minutes per.

I'm really big on Jason Thompson, and given a choice, he's the player the Timberwolves would be better off with. JT has more height, reach, and defensive potential than Landry, allowing him to fill a critical need as a backup center. But both are intriguing for what they can offer. 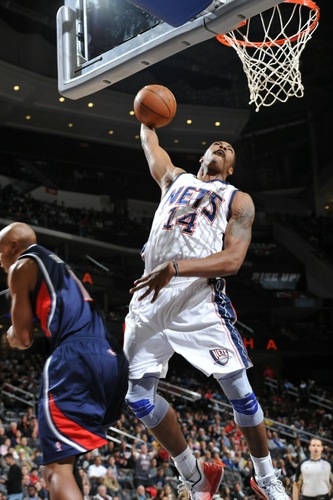 This is a guy who won't be available until right at the trade deadline, if at all, because the Nets are going to do everything they can between now and then to win the Carmelo Anthony sweepstakes. But he's worth keeping an eye on for a couple of reasons.

One, the Timberwolves are desperately searching for an athletic 4/5 who can rebound and defend. Favors would be a prize pickup for that. He's incredibly explosive, a strong rebounder, and he has the height and reach to be a major force on the defensive end.

And two, Favors is already better than advertised. Wolves fans are pretty familiar with him thanks to extensive pre-draft coverage, and the one big knock against him was that he supposedly wasn't NBA ready. Well, that's turning out to be untrue. Favors isn't playing a ton of minutes, but he's been ridiculously good in the minutes he has gotten.....6.7 points and 5.6 rebounds in 19 minutes a night (12-11 per 36) on sky-high 54% field goal shooting. He's more than held his own against just about anyone the Nets have sent him out against. If the Wolves get a chance to acquire Favors, there's no excuse not to. 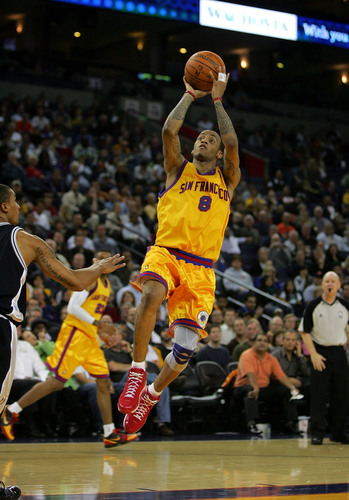 The Warriors' cap situation has (somewhat) stabilized, and the chatter about Ellis not being able to play alongside Stephen Curry has died down, but if/until the team starts winning games in bunches, Ellis will always be at least halfway on the trading block.

Having torn apart the Wolves twice already this year, not much needs to be said about Ellis' game. Like Brooks, he'd make a fairly ideal Triangle point guard. He also has dynamic scoring ability, and can be a major player in the passing lanes on defense as well.

Golden State is always a team in flux it seems, so it's hard to tell what their position on Ellis is on any give day. But in the end, they're paying nearly $32 million for Ellis, Andris Beidrins, and David Lee....a lot of money for the few number of wins they're getting. Between that and looming contract extensions due for Stephen Curry and Dorell Wright, it wouldn't be surprising to find Ellis being shopped heavily as the year goes on. 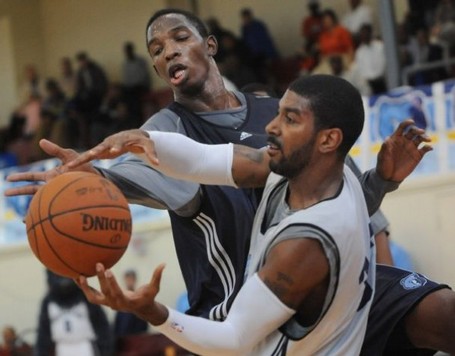 Yes, I know. Sad irony here. OJ Mayo is a player the Wolves traded away. And Thabeet is a struggling #2 overall pick, which makes the Wolves his destiny, doesn't it?

One has to believe both are on the trading block. Actually, Thabeet officially is, and although the Grizz deny they're shopping Mayo as well, he's been demoted to the bench in favor of Xavier Henry, who apparently reminds head coach Lionel Hollins of Shane Battier.

For all the red flags surrounding both players....soft play and terrible production from Thabeet, one-dimensional play and smaller size with Mayo....there's one thing that should be pointed out: the Grizzlies are terrible at developing talent. Mayo, Thabeet, Rudy Gay, Marc Gasol, Mike Conley....none of their players make significant strides year to year. They're all basically the same players they were last year and the year before, with their production fluctuating based purely on their minutes fluctuating.

A change of scenery and a more competent, teaching coaching staff could do both Mayo and Thabeet a lot of good. Hasheem in particular will cost next to nothing to acquire, and Mayo might not be too expensive either, considering the situation. 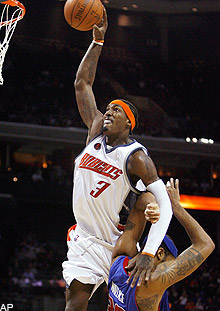 The 'Cats just aren't very good. Their defense has slipped a great deal since last season, and they still can't score even adequately. With a 9-16 record and Michael Jordan now owning the team, the pressure is on to either win, or change things up until wins start happening.

The trouble with that is the Bobcats have already maxed out the salary cap. That means any major change will have to be a trade with one of the Cats' top players involved. It's unlikely anyone will want Boris Diaw or Stephen Jackson, so what other choice would there be than to move GForce?

Should Wallace actually be put on the block, the Wolves should pursue in force. Crash is a fantastic player and fit...he's athletic, a fantastic rebounder and defender, and can score pretty well too. He's not a high maintenance or high usage player (although the multiple concussions are a bit of a concern) and he can guard basically any position except center. Like Josh Smith, Wallace is a guy who can make an enormous and immediate impact for the Wolves, particularly defensively.

So what say you? Any names that should be on the Wolves' wish list? Or should the team stick with what it has and see what develops?