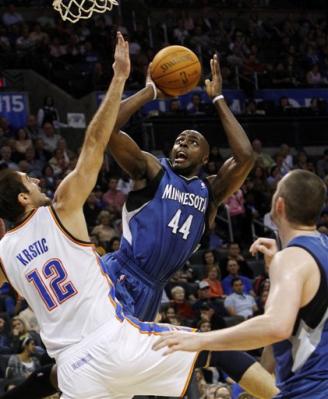 Anthony Tolliver is the real deal. There's no mistake about that. The guy can play at the NBA level, and play well. In almost every way, AT is the perfect type of player you'd want as a backup big man: he has good height, reach, and athleticism, can play both ends of the floor, in the post or on the perimeter, and will chip in on any given category on any given night depending on what the team needs and asks him to do.

However...there is an early season trend starting to show that is partially a product of Tolliver's highly energetic and rather complete game, and it's not entirely good for the team: Anthony Tolliver appears to be the Wolves' biggest impact player.

I want to be clear: I have nothing but love for AT. The guy is a professional. Solid game, amazing work ethic, fantastic attitude. He's the poster boy for doing more by doing less, and helping his team as a whole by staying within his limits as a player. He's a former DLeague-er who has worked tirelessly to earn his keep in the pros, and I couldn't be happier to see him not only stick, but play very well.

That said, the trend that's starting to develop around him is concerning, to say the least. 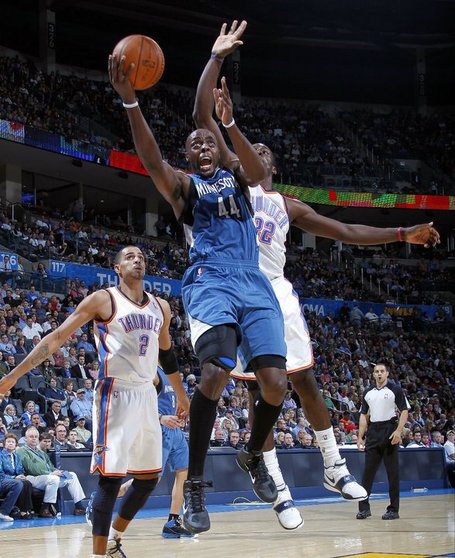 To start with, Tolliver is making the biggest on-court/off-court difference on the team. Through the end of November, the Timberwolves were scoring 105 points per 100 possession with Tolliver playing, 101.5 per 100 without him. The team is also giving up 104.1 points per 100 when he's on the floor.....versus 118.5 when he's not.

That's an on/off swing of 17.9 points per 100 possessions. No one else on the team comes even close to that differential...the next highest is Wesley Johnson at 10.8, then Brewer and Beasley at just over 8 apiece. And his simple rating of +9 is over three times that of the next highest (Kevin Love: +2.8)

He's also playing nearly 19 minutes a game, and....although I haven't dissected any gameflows....I think it's safe to say he plays rather significant minutes against other teams' starters. And he's not playing say, 35 minutes in a blowout game, then 5 the next tilt when the score is close...his minutes spread....particularly recently...has been a very consistent around-20 minutes a night.

The other part of this is in the 5 man rotations. This comes with the obvious caveat of small sample sizes (hence why it's an early trend), but the results in situations where he does play appreciable minutes with a certain lineup are pretty much all the same.

The Wolves' most utilized lineup by far this season (per BasketballValue.com) has been Telfair-Johnson-Beasley-Love-Milicic. Although Tolliver isn't subbing in for massive amounts of time with that group, take a look at what happens when he does:

(For those who care about such things, I've put Tolliver in place of the player he's replacing when he checks in, to make it easier to track. I'm not claiming he actually plays that particular position)

Likewise, if Tolliver is substituted into the Wolves' other primary unit:

And this happens in a lot of other situations with lineups that aren't as heavily used. 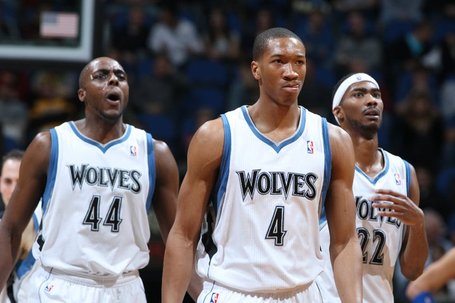 In fact, in nearly every case where Tolliver checks in for at least (around) 10 minutes with a particular lineup, there's an upward trend. Take 5 guys who play somewhat significant minutes as a unit, sub in AT at power forward or center, and that lineup performs better for the limited times he's on the floor with them. It doesn't even particularly matter who he's replacing....the result is the same.

I'm not sure what to say about this. I'm not sure why it happens. Maybe Tolliver is really just that 'impactful'. Maybe other players are dropping the ball. Maybe there's a coincidentally consistent set of matchup advantages or game circumstances happening when he checks in. Maybe the sample size is too small and this isn't actually anything at all. It's just a random set of variables erupting as a perfect storm for the moment....something that will disappear as the season progresses.

What I do know is that if it continues....especially if it continues.....for the rest of the season, then the Wolves have some very serious questions to ask: why are the team's fortunes tied to a guy signed at the last minute to be a 15-20 minute backup?

And why is he mattering more than Darko Milicic and Kevin Love?

In the meantime, get healthy AT, and keep doin' your thing. The Wolves are definitely better with you on board.