Burned in the Barnburner

Share All sharing options for: Burned in the Barnburner

For as many points went up on the board, this game sure wasn't pretty.

Coming off of a beatdown on the Cavaliers, the Timberwolves were brimming with confidence. They got off to a hot start early in this one, torching the nylon with a 9-9 start to the game. But the fire got out of control and burned the house down, and by the end of it, the Wolves were playing in a pile of ashes. In the end, a couple key things did the team in: one that couldn't be controlled, and one that most definitely could.

Despite how it felt in the second half, the Knicks weren't running the Wolves out of the building. For the game, both teams had very similar shooting percentages (Wolves at 52.6%, Knicks at 52.9%), rebounds (34-32), and free throw attempts (27-23). Even the deep ball wasn't as damaging in the box score as it felt on the court: the Knicks only hit 3 more threes than the Wolves (13) and had to attempt 9 more shots to do it in.

What did the Wolves in, ultimately, were two things:

One was turnovers. This is the controllable factor for this team, and the one thing that has plagued them throughout the season more than anything else. For the season, the Wolves are last in assist-to-turnover ratio, barely breaking even at 1.07. Tonight, the Wolves didn't even manage that.....17 turnovers to just 16 assists. 10 of those turnover happened after halftime. 6 of them happened in just a 2 minutes span in the middle of the third quarter, when the Knicks started fronting on defense and 'Sota's point guards tried to throw the ball through defenders.

This is reflective of something the Wolves have had problems with all year, which is terrible guard play. Ridnour, Brewer, Johnson and Telfair combined for 11 turnovers just the four of them, to just 11 combined assists. That's not something the Wolves can play through, especially on a night when the offense has to be retooled on the fly. Raymond Felton outplayed Minnesota's entire backcourt by himself, doing a masterful job of initiating the Knicks' offense, hitting open shots, and disrupting the Wolves' flow in the second half defensively. 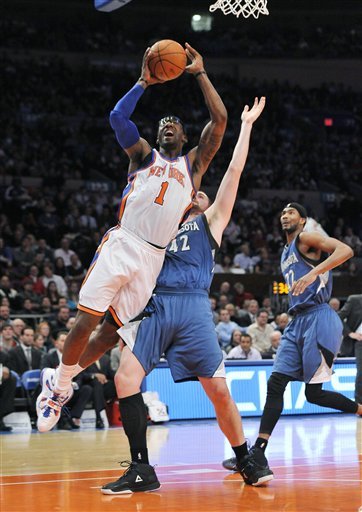 The other problem was Darko only played 8 minutes. He left the game in the first quarter with a quad injury...something he reportedly has been nagged by all year and aggravated on a hard collision with Amare Stoudemire trying to set a down screen. To that point, Darko had played a near-perfect game....4-4 from the field, 2-2 from the line, with a rebound, assist, and block. Without Anthony Tolliver, the Wolves tried to turn to Pekovic (didn't work), then went small with Kevin Love in the middle.

When the Wolves beat the Knicks earlier this year behind the historic 30/30 performance of Kevin Love, the one subnote to that contest was that Amare Stoudemire only played 25 minutes because of foul trouble. Tonight, STAT had no trouble with fouls, and....without the presence of Darko in the pivot....no trouble with scoring either. Kevin Love made a battle out of it, but there was no stopping Amare. 34 points on 15-23 shooting, with 12 of those points coming in the fourth quarter when the game was on the line. Stoudemire was just too quick and too athletic for anyone the Wolves sent at him.

It's disappointing to drop a game like this, when the Wolves had every ability to win. Even missing The Dark One, the Wolves could have eeked this out had they controlled the ball better. These are the kinds of games the team needs to be winning to survive what's going to be a brutal 2 months, with multiple contests against the Blazers, Nuggets, Spurs and Jazz(es) of this world. Hopefully cutting their teeth in games like this will give the Wolves more bite next time, and get them to work on mistakes that need to start being fixed.

Next tilt is Wednesday against the Thunder at Target Center.