The Case for Andre Iguodala

Share All sharing options for: The Case for Andre Iguodala 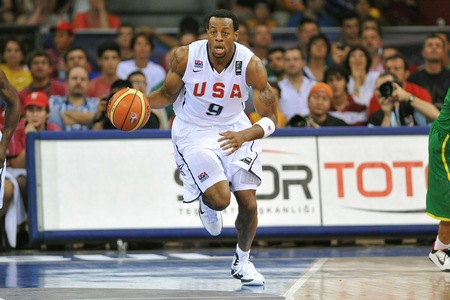 The Timberwolves have gone through massive roster turnover in the last two years. That's not something that can happen continuously. Teams need time and stability to develop chemistry.

On the other hand, the Wolves are very much an incomplete team. Nothing is set in stone by any means, but there are certainly elements the team appears to lack. Critical elements to winning basketball teams.

After four years of being the face of the Philadelphia 76ers....a title he inherited in 2006 from Allen Iverson, who was traded that season to the Denver Nuggets....a lot of fans forget that Andre Iguodala began his NBA career away from the basketball. His sophomore season was largely his most efficient, seeing Iggy post career highs in FG% and 3pt%, as well as some of his better rebounding and assist/TO ratio averages. Although Iguodala has been asked to be the go-to player for the Sixers since Iverson left town....and has carried that role well, all things considered....his place on a team destined to really go places is really away from the ball.

The reason this is important to the Timberwolves is Micheal Beasley. The team is certainly in the development stages, but it is working to establish a hierarchy. Beasley is the go-to player. He's still growing into the role, but the potential is there. The Wolves shouldn't do anything to take that opportunity away from him. The team shouldn't do anything that will take the ball out of his hands.

So how would this all work out? 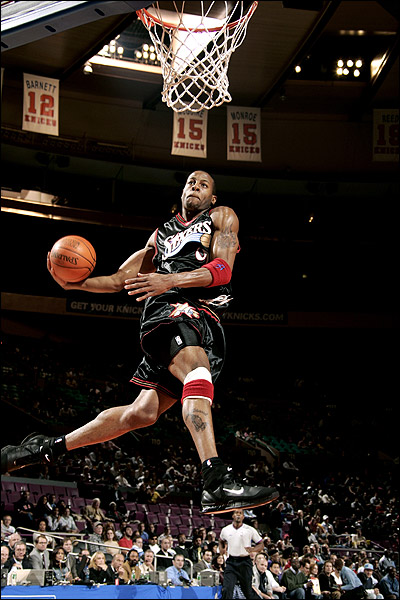 It has long been assumed that the 76ers will deal Iguodala this year. They're a horrifically unbalanced team with an extremely expensive roster and few wins to show for it all. The only realistic way they can get wins is to balance the team, which thus means cutting roster costs. Trading Iggy is the only real viable way to do that. It says nothing about him as a player....it's purely situational. Iguodala himself has basically accepted that he will be traded at some point this season, saying "I would love to stay in Philadelphia, but if I'm playing somewhere else, I definitely understand how that could happen. I know how the business works. I'm prepared"

There are certainly reasons why Iguodala wouldn't be a good pickup. He wouldn't necessarily be expensive to acquire....the Sixers would likely be looking for cap space and draft picks, both of which the Wolves have plenty of...but he would cost a lot on the books. His contract is guaranteed for $40 million over the next three years, with a player option for another $16 million for a year after that. He's also (somewhat) older than the core players on the Wolves' roster...26, compared to Love's 22 and Beasley's 21. And although he isn't a high-usage player like a Kobe or Wade or LeBron, he does demand a fair about of the basketball to be effective.

The upside of that is that the Wolves need a guard who will handle the ball. Guard play this season has been generally terrible...poor shooting, suspect defense, and a slew of turnovers and other unforced errors. For a team like this, Iguodala would be a godsend; he has fantastic handles, is a willing and very capable facilitator, a strong defender, and a player who can create his own shot...to an extent....by utilizing his superior strength and athleticism to get to the hoop and/or draw fouls. Iggy is one of the league's best at getting to the free throw line, with a FTA average of nearly 6/game over the last 5 years.

He also has the size and length to play small forward, which would allow him to alternate with Wesley Johnson, depending on matchups and what advantages the Timberwolves could create by switching them around. And although he would be the second oldest player on the roster, he's still young enough to still be predating his "prime years", and young enough that he was selected for Team USA's 2010 roster, which consisted almost purely of up-and-coming NBA players. Iguodala falls squarely between potentially great and already productive....he has the youth to fit in with a rebuilding team, but already has an established and consistent game that can propel a young team to the next level and command the respect of opponents and referees.

And as for "fit"....well, Iggy's career averages of 15.8-5.8-4.6 on 46% shooting (32% from three) are pretty similar to Scottie Pippen's 16-6.4-5 (47% shooting, 33% from three) The Triangle offense has seen some rather radical rotations and hierarchies, with Pippen being the Jordan-era Bulls' point guard in all but name. But that's a role Iguodala is suited for anyway....he's essentially been the Sixers' point guard for three years now as it is.

Plus, the guy can do this:

But more than anything....more than the fit or the need or the immediate help he would bring....the Wolves simply are in no position to pass up on the chance to land a player of Iguodala's caliber. Deals to acquire a potential 20-5-5 player for cap space, small contracts and intangibles don't come up very often. The salary expense may be high, but it's an expense worth paying because if it isn't, the Wolves very likely end up with nothing. If history has taught the team anything, it's that it can't rely on the draft or free agency to bring in players like Iguodala's. 'Sota just isn't a hoops destination. The plan has always been to use the assets for this sort of deal anyway, so get the talent while it's gettable.