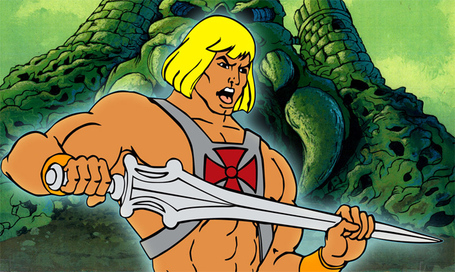 An artist's rendition of Jason Smith.

We can't end writing about a 4-game winning streak with a Korean food recap, can we?  Last night the Wolves came out against the Sixers team with all the energy of a koala on lithium and promptly turned a team with Willie Green, Jrue Holiday, and Jason Smith into the Masters of the Universe.

That's it.  Thank you and good night.

I wish there was more to say about the game, but...

...that's pretty much it.  What an anti-climatic way to end a winning streak.  It's one thing to get run off the court by a team with superior talent (a'la Cleveland or LA) but it's quite another to simply not show up, quickly run out a deep (an ineffective) bench on the front end of a back-to-back, and essentially roll over for a belly scratch.  I get that this is a job for the players and everybody has their bad days at the ol' grindstone, but that doesn't remove the disappointment for a lack of effort in the 1st half.

That being said, I really can't find it in myself to be too upset after seeing such good shooting and solid play over the last 5 games so I'm not going to put up a Korean cooking game wrap.  Instead, here's a little something to brighten your day and get your spirits up for what should be an even tougher challenge tonight, Charlotte.  Here's Snooks Eaglin and George Porter Jr. tearing up Lipstick Traces:

Snooks passed away almost a year ago to this day (Feb 18th, 2009).  He's one of those guys who makes you completely understand that no matter how long you play the guitar, you will never really play the damn thing like it was meant to be played.

Snooks was a New Orleans music legend and he is the number one performer on the list of people I would go back and see if I had a time machine.  Why? Well, aside from the playing...

The digits on Mr. Eaglin's right hand flailed at seemingly impossible angles as he finger-picked and strummed a guitar's strings. A set by the so-called "Human Jukebox" could range from Beethoven's "Fur Elise" to Bad Company's "Ready for Love."

He thrived on feedback from onlookers, gleefully took requests and challenged his musicians to keep up. Utterly unselfconscious, he would render fellow guitarists slack-jawed with a blistering run, then announce from the stage that he needed to use the bathroom.

He also played at a bowling alley, which warms the heart of someone who spent many a night at Omaha's Ranch Bowl (now a WalMart) during the 90s.

It was Robert Plant, in fact, who first made Blancher aware of Mr. Eaglin.

In 1990, not long after he took over the Mid-City Lanes, Blancher received a call from Plant, who wanted to throw an after-party at the bowling alley. He asked Blancher to book Mr. Eaglin, whom he met years earlier when the guitarist performed at a party in New Orleans for Plant's former band, Led Zeppelin.

The after-party didn't happen, but the Mid-City Lanes became Mr. Eaglin's preferred venue. He played as frequently as once a month.

"He's an irreplaceable guy," Blancher said. "More celebrities came to see Snooks than anyone. His reputation was as big as anyone's in New Orleans. And he wouldn't travel, so if you wanted to see Snooks you had to come to Rock 'n Bowl."

During the 2000 Jazz Fest, Bonnie Raitt showed up at the Mid-City Lanes to hear Mr. Eaglin. He exclaimed from the stage, "Listen to this, Bonnie! You gonna learn something tonight, girl!" She later lent a hand by replacing a broken string on his guitar. 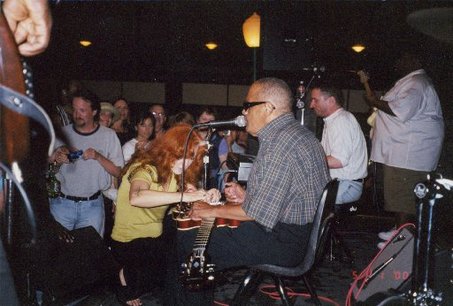 Led Zep after parties, Bonnie Raitt on the guitar tech duty, getting people to come to him...Snooks was so well respected that he got sent out in style:

BTW: If you look carefully at the Bonnie Raitt picture you will see Jon Cleary at the piano.  Jon is one of the best performers carrying on the NOLA blues tradition and you could certainly do a lot worse than to go out and pick up one of his records...right after you get one of Snook's.  If you want a quick snippet of Cleary's work, check out the January 31st edition of Le Show, where he performed a few tunes in studio.  Also, if you finish the first YouTube video, queue up "Red Beans" and you will see Cleary at the keys behind a blistering guitar performance from Mr. Eaglin.