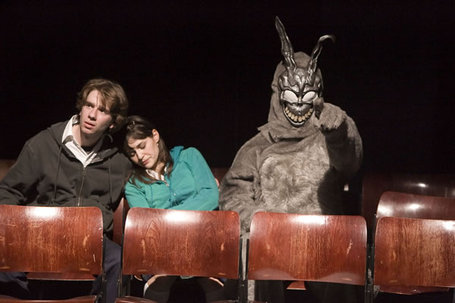 We remaining Wolves fans are a beaten-down group.  Malik, the Joe Smith deal, Paul Grant, Steph going crazy, the 1999 Draft, Wally's contract, Cassell's injury during the WCF, Latrell's quest to feed his family, Ndudi Ebi, Mike James and Ricky Davis, Foye for Roy, McCants over Granger, KG's wasted prime, still owing a 1st round pick for the Marko Jaric trade, throwing in a 1st rounder for Marcus Banks, the Flip firing, the Casey firing, the Wittman hiring, finally sending KG out of town, and spending the last 3-4 years cheering for little more than cap space and draft picks; we're a tad cynical, a bit quick on the panic/hyperbole trigger, and, like a kicked dog, a bit uneasy about sticking our nose out in the open to sniff around the fresh box of kibbles that the new guy in town is laying down for our puppy perusal.

Why on earth would such a group be so excited about a guy described by his new boss as "traumatized" and "distraught"?

Whether he is aware of it or not, Darko knows exactly what it is like to be a Wolves fan.  We know traumatized and distraught.  We know it like the backs of our hands. Most of us who are still fans have probably had the conversation with ourselves about what it would take for all of the bad stuff to add up to a one-way ticket off the bandwagon.  Like Darko, we constantly wonder if we should just give up and head off to our own personal Europe: Thunder fandom.  We stick around for the hope of redemption.  We stick around for the hope that, one of these days, the Wolves will land an A1 player in the draft and/or get lucky in free agency with a yet-to-be-developed gem.  We do this year after year, despite the lotto balls never landing in our favor or the useful free agents never landing in our airport.

We want Darko to make it on the Wolves.  I won't go as far to say that we need him to succeed and stay, but him doing so as a productive player would be a victory not only for the team and its roster, but for its fan base.  Here is a guy that was left for NBA dead, a guy who was all set to head back home before he found a new place to play with a franchise that has never before polished up an unproven gem or attracted anything worthwhile.  If he makes it here, the team we root for will have finally pulled something out of the fire instead of the other way around.  This is why there is so much interest in Darko.  This is why fans are so quick to embrace him and hope for the best.  We like reclamation projects because we are hopeless Wolves fans who are reclamation projects all unto ourselves.  If you don't believe me, wait until your ticket rep calls with an offer of 50% discounted 2010 season tickets.  Darko making it back with the team as a whole would make a lot of this nonsensical hobby worthwhile...at least more than the modest amount of joy we get with late-season victories over teams who are resting their best players.

Is this hyperbole?  Perhaps, but this is a fanbase on its last few straws and we'll grasp for any sign of hope.  Darko is at a similar place in his NBA journey.  Here's hoping that we all find something we can hang on to and pull ourselves up.


PS: I should also note that by writing this I have convinced myself that I have personally doomed any chance Darko had at success with the Wolves.  His next outing will be 7 minutes of over-winded action resulting in 4 turnovers, a thrown-ball technical, and some nasty looks on the bench.  Such is the life of a modern Wolves fan.

PPS: With all of this talk about Eastern Europeans and Weltanschauung, I think we need a German saying to wrap this little ditty up.  How about this?