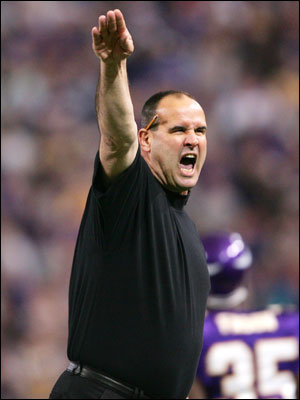 These last few seasons have been rough, I know.  Even before KG left, Wolves fandom was more about cap space, draft positioning, and wondering whether or not Papa Glen would continue to lose large sums of his wedding invite money on a decreasingly interesting product or sell the team to out-of-state interests.

Throw in a pinch of poor front office roster management, a heaping of silly drafting, a dash of a coaching carousel, and a bucket of genuine bad luck, and you have a Charlie Brown fan base that feels like it has had the ball pulled out from underneath it a time too many and is all too willing to retreat back into the safe havens of draft speculation and cap space punditry instead of actually paying full attention to what is right there in front of their noses in the here and now.

At some point, and no matter how good the odds were/are that the Lucy ball-pulling would continue, things eventually have to get better.  After all, continual bottoming out simply cannot happen in a league where other GMs seem to be in active pursuit of the league's basement.

My question to you, and my lead-in to the game wrap is this: When will you start enjoying the on-court product more than the possibility offered by cap space, stashed Euros, and future draft picks?  This, to me, is the key question to moving beyond the Lucy/Chuck Brown days of Wolves fandom.  Personally, and without sharing the exact number it will take to make it happen, I will know things have turned the corner when a) FanPost section is more Blazer's Edge game wraps than county swap meet and b) when I don't feel the need to fuel the fire with seemingly weekly Draft Board posts.  My hope is that we catch the change before the disconnect in our site's discourse and the team's on-court play becomes too big to cross with any credibility, and I firmly believe that we are not yet there, but I'm kind of interested in hearing all of your thoughts on the subject.

Actually, I left out the biggie.  The main indicator for turning the corner will be a firm and wide-spread rejection of the lottery ball fetish that could accompany the team on its journey away from the 2nd worst record in the league.  Last night against the Griz, the Wolves won their 4th straight and moved into a tie with Golden State for the 3rd worst record in the league.  Sacramento is only 3 wins away and then the real fun begins with Washington, Detroit, Indy, New York, and Philly all within striking range.

For those of you looking for reasons to give your causal sports fan friends to return to Target Center, last night's game is probably the game you want to reference.  It had it all.  A slow start to lure the Wolves haters into a generalized sense of "here we go again," strong individual performances, injury intrigue (well, this isn't something we want to see too much of), both teams shooting over 50% from the floor, only 26 fouls between the two teams (typically we see 40+), long stretches of uninterrupted up-and-down action, a masterful duel between two young performers down the stretch, a dagger 3 pointer, fantastic point play by the home squad, solid defensive rotations, noticeably excellent coaching, and, best of all, genuine excitement from the crowd.

The Wolves started out the game with a 6-0 run and some good energy but were quickly countered by a 12-2 Griz run built on the back of what the Griz do best: scoring in the paint and in transition.  The Wolves answered the Griz's aggressiveness with a barrage of half-assed jump shots from as far away from the paint as possible.  Looking back at the game's quarter-by-quarter shot chart from the post-victory perspective, it really is striking as to just how jump shot dependent the Wolves were in the...well, we'll save that point for later.

The Wolves' first half offense was carried by Ryan Gomes, who went for 20 points on 8-10 shooting.  Of course, this sort of performance isn't exactly something the team can bank on, and 8 of his 10 first half attempts came on jump shots out of the lane, but his hot shooting filled the gaps between the times when the Wolves were aggressive and attacked the paint and when they moseyed around the edges in the 1/2 court.

The 3rd quarter was carried by Corey Brewer, on both ends of the court.  Brewer played all 12 minutes in the quarter, going for 15 points on 7-9 shooting while locking down OJ Mayo, disrupting passing lanes, getting out in transition, hitting from 3, and being an all-around basketball menace.  This is the guy we saw at Florida.

The 4th quarter was brought on home by a vintage performance (if a 25 year old can be vintage) from Al Jefferson.  Big Al went 8-8 from the floor in the quarter, scoring 16 points while eating Marc Gasol alive.  Jefferson scored on push shots, nifty post moves, garbage clean up, and even a mid-range jumper or two.  He was absolutely dominant and there was nothing at all that Memphis could do about him.  Of course he did take a few shots that he had no business taking (a 20-foot jumper, really?), but I suppose we'll let that slide for the moment.

All of that being written, the star of the game goes to, without a doubt, Ramon Sessions.  Ramon ended the game with a team-high +19, and this was one of those games where +/- captured exactly how big of an impact a player had on the game.  As mentioned above, the Wolves just about did themselves in with a 1/2 court offense built around mid-range jump shooting nonsense that not only did very little to put the Griz in a position to have to defend, but did nothing to initiate contact or force the sort of chaos the Wolves need to have on the court in order for them to succeed. Ramon reversed this trend and turned the Wolves into an outfit that aggressively and decisively attacked the lane/paint/rim.

The elephant in this jump shooting room is Jonny Flynn.  This game should be Exhibit A for anyone looking for proof that Ramon Sessions is the point guard that gives the Wolves the best chance to win.  He doesn't rise to the top with a single aspect of his game that stands above and beyond all else (nor does he have Flynn's perceived "ceiling"--whatever that means); rather, he simply takes what Flynn could (and should) do and adds to it with little tweaks of his game.   Where Flynn pounds the ball into the ground in the half court, Sessions is quick to pass and decide.  Where Flynn is willing to fiddle around far away from the rim, Sessions is quick to take direct angles to the front of the rim.  It is downright criminal that Sessions is not starting on this club and that Flynn is not being groomed for the role that most of us know (and others highly suspect) he is destined to play: backup spark plug.  Perhaps this is yet another example of the Mulligan Factor, a shrug-your-shoulders acceptance of things that happen during a season that can be chalked up to player development and roster positioning over wins and losses. Whatever it is, the Wolves won last night's game because Ramon Sessions made quick and decisive decisions with the ball while directing all offensive traffic towards the rim and putting the ball in the hot hands.

Another benefit of playing Ramon was that the man can play some above average defense at the point.  Take a quick gander at the PopcornMachine GameFlow from last night's game.  Mike Conley got to wherever he wanted in the 1st quarter against Jonny Flynn.   He got to the rim, he got the ball to scorers in transition, and he all-around controlled the tempo.  Conley went for a +9 in his 1st half stints against Jonny Flynn.  In the 2nd half, Sessions went for +16 while controlling the game's tempo and holding Conley to 2 points and next to zero impact.

Start Ramon.  We have finally seen what we wanted to see with a shortened bench and a 3 man rotation at the 4/5.  Now it's time to see what we want to see most of all: Start Ramon.  Please.  Of course, the kicker here may be that Ramon plays better with Kevin Love and Damien Wilkins than he does with the starters but...well, never mind, start Ramon.

It should be noted that Jonny Flynn played the part of teammate last night:

I mentioned it in the game story, but Jonny Flynn came out of the game four minutes into the second half, and never returned. Rambis said he tried to put Flynn back in, but the rookie talked him out of it because Ramon Sessions was playing so well (19 points, six assists). Flynn wasn't bad, though his shot wasn't falling; he scored six points on 2-for-5 shooting, with five assists. "That means a lot to me as a coach, that players will make sacrifices for the benefit of the team, even when it costs them playing time," Rambis said. "I really appreciate that from Jonny." So did Jefferson, who assured us he would never have given away playing time when he was a rookie. "He just said, 'Let it ride,' and that surprised me for a rookie," Jefferson said. "But he saw that Ramon was playing well, so that says a lot about him."

Well done.  Perhaps another sign of the team and its fan base paying more attention to the here and now is them putting the lineup with the best chance of winning on the floor each and every single night instead of deferring to "player development".  Sessions needs 25+ mpg per night.  What that means for Flynn, I don't know, but there is a large enough sample size to say that Sessions gives this team a better chance to win and its not like he's old or not a significant value signing.  Playing your best players the number of minutes they deserve to be played is a fairly solid sign that the team you are rooting for is trying to win in the here and now and not save itself for lotto balls.  Just say no to being a lotto virgin.  Score when you have the chance.

OK, we've run this bad boy on for quite a while now and it's time to wrap it up:

That does it.  The Wolves go for 5 in a row Tuesday in Philly.  Until later.