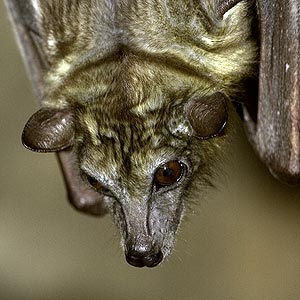 One of the great wildlife wonders of the world unfolds in southern Africa near the end of each year. As the sun sets, up to eight million fruit bats unfurl wings that average three feet (a meter) across, release their grip on the sagging branches of their tree roosts and take to the sky. A few lead the way, soaring off gracefully on those big wings. Then more follow, and more still, until the sky is filled with bats flying off in every direction. Three thousand metric tons (6.6 million pounds) of mammals in flight create an amazing and beautiful spectacle.
The straw-colored fruit bats (Eidolon helvum) begin to arrive in Zambia’s Kasanka National Park in late October. Their numbers grow rapidly until, by the last week of November, up to eight million are packed into less than 2 1/2 acres (one hectare) of evergreen swamp forest (known locally as mushito).

According to Life, the current mushito of straw-colored fruit bats is over 10 million strong.  They consume over 6,000 tons (yes, tons) of fruit per night.  Thankfully, they are not straw-colored brain bats.
Clicking back to the Wolves, I see...holy crap.  Really?  They're within 10?  I'm going to assume some sort of dark magic happened at the Center in the 3rd quarter.  Dark, dark magic. My attention is gotten....until I got caught up on a report about the sarcastic fringehead on the fish episode of Life.
Getting back to the game, it's back to 6 points and they appear to have their best lineup on the floor: Sessions, Ellington, Gomes, Love, and Jefferson.  Over on Life, the weedy seadragon. 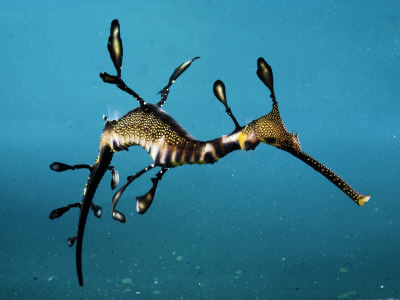 The male weedy seadragon is the lucky chap who gets to carry the eggs.

As for Our Beloved Puppies, I tuned back just in time to make the following random thoughts:
Four Factors:
Pace Eff eFG FT/FG OREB% TOr Phoenix 101.0 109.9 54.7% 19.8 15.6 12.9 Minnesota 104.0 41.5% 28.7 37.0 14.9
The Wolves were done in by awful, awful shooting. They dominated the offensive glass and the free throw battle while getting absolutely blown out in shooting percentage.  Thank god for Kevin Love out offensive rebounding the entire Phoenix because bad shooting + limited attempts would have equaled an even worse night for the Wolves.  This was a game that was there for the taking, regardless of the awful 2nd quarter.  They missed 10 free throws and shot .423 from 2 and .250 from beyond the arc.  3 more free throws and 2 more made 2s and they win...with percentages that fall in line with what they typically put up.  Darko and Big Al were the worst offenders, shooting a combined .310 from the floor.
Well folks, that about does it for the night.
Until later. 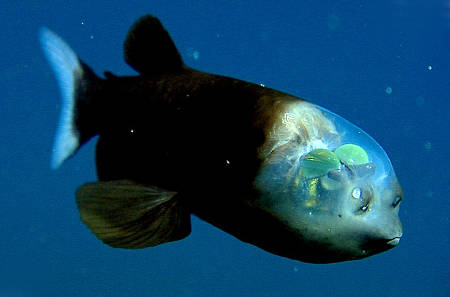 This creature is called the barreleye.  It has a see-through head.  Those little greenish orbs inside its head are its eyes.  The eye-looking things in the front of its head are nostrils.  The barreleye's eyes look straight upwards and it finds its prey by looking for moving shadows against the dim light of the deep Monterey Bay.