Is Corey Brewer the most improved player in the league?

Share All sharing options for: Is Corey Brewer the most improved player in the league?

The Wolves have started the Corey Brewer MIP campaign (which, BTW, is far better than last year's glass cleaner campaign for Kevin Love).  Do they have a case? We'll take a look at his game below the fold.

The first thing that makes a Brewer MIP campaign somewhat problematic is determining what and when he improved from.  Brewer played a grand total of 15 games and 307 minutes last year.  Is that enough of a base to make the leap to MIP?  Do we go back to his rookie year to make that determination?  I'm of the opinion that there is no way on god's green earth that a MIP candidate can be judged against 15 games with only 8 starts.  I think the only reasonable way Brewer can be considered as a MIP is if we compare his current season to his rookie campaign.  Whether this is fair or not, it's really the only way to compare two iterations of a healthy player and the improvement in between.   Plus, if you are going to compare this season's Brewer to the Corey Brewer of the first 15 games of last season, you aren't going to find enough improvement to even consider talking about MIP status.  It only works if you go back to his rookie campaign.  It's one thing to improve a FG% from .374 (rookie year) to .428 (this year).  It's quite another to only move from .411 (2nd year, pre injury) to .428.  Across the board, the 2008/09 pre injury Brewer was playing fairly similar ball to what we've seen this season.  Let's take a quick look at some basic Four Factor related stats:

Let's take a look at a few of the improvements from Brewer's rookie year to his current campaign along with the percentage of increase/decrease:

Brewer has made significant strides in his shooting while playing a ton more minutes and finishing a boatload more possessions.  He's both playing and getting involved about a third more than he used to while shooting significantly  better across the board.  His offensive rating has improved while his defense has remained steady (which, for a "defensive stopper", probably is a discussion-ender for the MIP award, especially when you look at his defensive rebounding drop-off).
That being said, it's pretty hard to look at Brewer's numbers and come away with anything but a clear understanding that he is a dramatically improved player from his rookie season, especially in terms of his shooting, ability to competently end possessions, and not completely knee-cap the offense.  That being said, he's a starting wing on the worst offense (maybe team) in franchise history.  He's also improved from historically awful to at-or-slightly-above replacement level. This is the 2nd big rub for any Brewer MIP candidacy: His improved play hasn't improved his team to any sort of meaningful level.  Rub #3 is that his defensive numbers haven't improved and he's really not showing himself to be either a lock down defender or a guy that can provide some defensive flexibility across the 2/3.  Rub #4 is this guy: 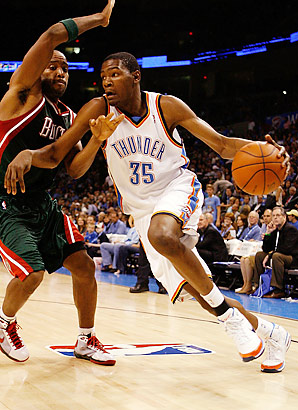 I suppose you could give lip service to guys like Marc Gasol and Josh Smith, but the MIP race is already over.  It's been over for months.  KD hasn't posted any crazy increases in TS%, eFG, rebound rate, or any other individual mark.  What he has done is increase his offensive and defensive ratings by nearly equal amounts (4.5 and 5.5%, respectively) while posting a 72% increase in win shares, a 22% increase in PER, and a 13% increase in usage rate. He has developed into an A1 option on a playoff team at the age of 21.  He ends roughly a third of his team's possessions with a TS% of 60%.  He plays nearly 40 minutes a game.  The guy has become The Guy.


Corey Brewer has made some very nice strides this year.  I'm not sure how the voting breaks down for the MIP award,  but if there is room for a 2nd, 3rd, or 4th place vote, Brewer is definitely deserving of some consideration. He really is. It's not often someone improves their shooting numbers by 16-23% over the course of a single full season.  It's not often where you'll find a player who increases his number of used possessions by over a third while increasing some of his efficiency numbers by up to 44.5%.  That being said, he still plays on a 14-win team, he hasn't improved that much over what he was showing last year pre-injury, his improved play hasn't resulted in greater team success, his defensive numbers haven't improved at all, and Kevin Durant exists.  Those are tough things to overcome.  It also doesn't help when his team's President of Basketball Operations straight up says that Brewer is not the MIP during a Sunday radio interview a couple of days before the campaign to get the guy an award starts.  That should probably be strike numero uno against him.  Anywho...


Here's hoping Brewer continues to improve his game.  He still has a long way to go with his handle, his 1-on-1 defense, and his shot.  He worked his tail off last off-season to improve his game.  Here's hoping he does the same this year and that it rubs off on his teammates.  Whatever the case, Corey Brewer's improved play has been the overall highlight of an otherwise dismal year.   Maybe this is the start of a good case to be made about the NBA's need for a Comeback Player of the Year award.  You know, something that could be given out to guys who make it all the way back from an injury or a personal setback.  Congratulations Corey, you just won the first annual Hoopus Comeback Player of the Year Award.  Your trophy is a wax head of Martin Van Buren: 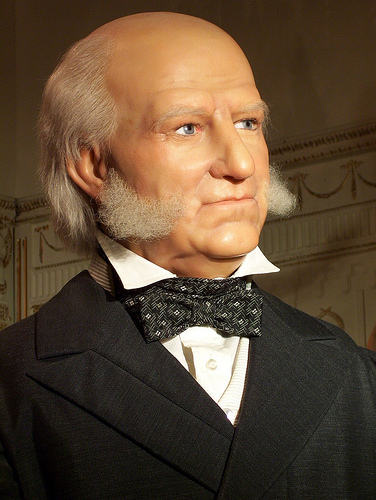