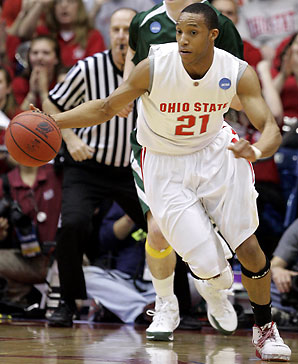 It's that time again.  Time to update our 2010 Draft Board.  Our last version can be found by clicking here.  There's been a bunch of movement since the last edition.  Who will be #1 on the list?  Are there any new additions?  Find out below the fold.

A quick editorial note before we kick things off: I made a slight adjustment to the Hoopus Score. I ran the numbers back for 3 seasons of draft picks and I came to the conclusion that I needed to provide a weight to the FTrate score based on position.  Bigs were simply getting too much of an advantage by having the majority of their touches in the lane.  Just to give you an idea of how this has mixed things up, Blake Griffin is still the highest rated prospect of the last 4 years and Evan Turner is #2.

The first thing you may notice is Jeff Taylor.  For those of you unfamiliar with the guy, here is his Draft Express profile.  Taylor is one of those prototypical small forward type of players with elite athleticism and legit size.  What is pushing his Hoopus Score through the roof is that he carries a high usage rate (27.5) while taking (25.2% of his team's FGAs while he's on the court) and making (52.7% eFG) a lot of shots with an excellent Oreb% for his position (9.4%) while getting to the line like a bandit (66.3% FTr; and making .736 of his shots when he gets there).

His biggest problems are his atrocious 3 point shooting (he's shooting 1-11 this year) and his somewhat above average turnover rate (18.9).  For the Wolves, he has an additional selling point:

Defense might be Taylor’s biggest selling point as a prospect, and probably will continue to be his calling card in the NBA. He has outstanding tools to get the job done on this end of the floor, and he’s both willing and able to use them to the benefit of his team. Taylor gets low on every possession in an intense fundamental stance, moving his feet extremely well and absolutely smothering smaller opponents with his size, length and outstanding lateral quickness. He is almost always assigned to defend the opposing team’s best player, and is a great weapon to have against the pick and roll since he can switch on anyone from the 1-4 positions. Taylor is also a phenomenal rebounder (particularly offensively) for his position, pulling down nearly 10 rebounds per-40 minutes pace adjusted. This is a testament to his physical tools, but also his excellent activity level.

Here is a snippet about Taylor from Basketball Prospectus' excellent college preview publication:

Having arrived on campus as a freshman last year with a minimum of buzz from evaluators of recruits, Taylor has to qualify as a wonderful surprise for Stallings. (In defense of the evaluators, it was probably easy to lose track of a player who made his way to Nashville via Norrkoping, Sweden, and Hobbs, New Mexico.) The per-game numbers are a little deceiving because the coach rotates his frontcourt, including Taylor, so liberally. As a result Taylor appears to the world at large as merely a 12-point-a-game third option for an 8-8 team. (Yawn.) The world at large should look closer: Taylor’s a beast on the offensive glass who makes 55 percent of his twos while playing a huge role in the offense, albeit while averaging a mere 26 minutes per game. (Stallings is an old Missouri Valley hand who doles out playing time for his frontcourt the way Dana Altman does at Creighton for the whole team. In both cases the minutes are limited not by foul trouble or by a desire to rotate in fresh legs on an up-tempo team, but simply by coach prerogative within a preset pattern.) Yes, Taylor needs to either give up the threes or start making them, but he’s still pretty clearly on a trajectory to "emerge" here sooner rather than later.

I have no idea why this guy isn't on the national radar for the 2010 Draft.  Has he said that he is coming back to school in the 2010/11 season? I can't seem to find anything on this subject.  Whatever the case, Taylor is a player that should 100% be on the Wolves' radar and he is one of the better prospects (wing or otherwise) in this draft.

The other non-Turner wing player that the Wolves need to keep on their list is Oklahoma State 2/3 James Anderson.  If you haven't caught a Cowboy game yet this year, you really need to check this guy out.  He carries a huge usage rate with solid shooting numbers, big time free throw production, good rebounding for his position, and a very low number of turnovers considering the amount of time he has the ball in his hands.  Best of all, he's a legit 6'6".  Imagine the Wolves drafting a normal sized wing player.  It kind of boggles the mind, doesn't it?

As for the #1 player on our list, Evan Turner is separating himself from the pack.  While John Wall has been the consensus #1 pick throughout the year, I think Turner has made a case for himself to be the best player in the land. Let's take a look at some key stats used in the Hoopus Score (from the always-excellent KenPom stats site):

OK, first of all, you can't go wrong with either of these guys.  That being said, Turner is putting up special numbers and he's doing it at the point.  Could he play point in the NBA?  Is his success dependent on a high usage rate?  He is playing at an absurd level right now; a level above and beyond what Wall is posting in Kentucky.  He has legit size, defensive potential, and is by all accounts a fantastic teammate.  The guy definitely belongs at the top of the Wolves' draft board.

What really stands out in terms of the Hoopus Score is Turner's usage rate/eFG ratio, assist %, and his outstanding 2FG%.  He turns the ball over a bit too much for my liking but any time you can have a guy who has the ball in his hands that much and who can shoot the ball well and facilitate like nobody's business, he definitely deserves a look.

Wall is taking a bit of a dip in the standings.  His three point shooting has fallen off a cliff and his ast rate and to rate numbers are both headed in the wrong direction compared to the last time we checked in.  That being said, he's still a marvelously talented prospect with amazing size and athleticism for his position and he has put up some impressive numbers...just not as impressive as we first thought they could be.

As for the bigs, this year's draft has a fantastic crop of serviceable players.  The guy at the top of the pack is DeMarcus Cousins.  We here at Hoopus have no idea how the guy behaves off the court, but what he does while he's on it is something to behold.  The guy is putting up numbers that have him easily in the top 3-5 players in the draft.  He is 2nd in the nation in fouls drawn and offensive rebound rate.  He doesn't turn the ball over a ton and he has the 8th highest usage rate.  He appears to have legit size, sufficient athleticism, and superior strength.  What more could you possibly want in terms of on-court performance from a big man?  What is even more remarkable is that opposing defenses have changed their approach to Kentucky over the course of the year.

Tennessee got things rolling early on Saturday with a 74-65 win over Kentucky in Knoxville. In two games against the Cats this year Bruce Pearl got John Calipari’s team to shoot 41 threes. They made just nine of those attempts, including a 2-for-22 effort on Saturday. The scout on Kentucky appears to be to keep the ball away from DeMarcus Cousins and Patrick Patterson, give it to John Wall and Eric Bledsoe, and say, "Here. Shoot a three. You know you want to."

In conference play the Wildcats rank first in the SEC in 2FG percentage and 11th in 3FG accuracy. Over the past six games Wall and Bledsoe are shooting a combined 19 percent on their threes (8-of-43), with 38 assists and 40 turnovers. If you’re an opponent, you want the ball in their hands and not down low with the automatic two-point twins.

Bledsoe has been especially problematic for the 'Cats, racking up a 30% turnover rate (seriously) while not lighting it up from 3 or being particularly outstanding from 2.

Beyond Cousins, players like Ogilvy, Artsiom Parakhouski, and Ed Davis all offer solid choices with some limitations. The big that intrigues me the most after Cousins is Georgetown center Greg Monroe.  Monroe is a very interesting prospect for the Wolves.  He carries a 21.4 assist rate with a 5.5% block rate and a 55.6 FTrate.  Passing, size, blocks, and getting to the line.  Monroe is a player the Wolves should be targeting with their 2nd first round pick.  He's not the ideal pairing for Kevin Love or Al Jefferson but he is a phenomenally skilled big man who, if he has legit size, should be very high on the Wolves' list.

Oh, don't sleep on Cole Aldrich.  He's still a top 5 big man in college ball and the Wolves could do much worse.

Were we in charge of the Wolves front office, here's how our all-things-taken-into-consideration top 10 draft board would look at the moment:

That about does it for this update.  What say you?