Share All sharing options for: Draft Board Numero Uno 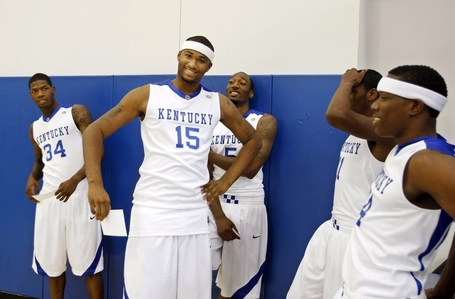 OK folks, the season is over.  It's time to start thinking about the draft (as if we weren't doing that already).

Our first 2010 Hoopus Draft board is below the fold.

A few things before we get started.

NCAA Tourney play is not taken into consideration. What that means for us here at Hoopus is that it is time to tune out the NCAA tourney performances and post version #1 of our post-season draft board.  Why do we tune out the field of 64?

An NBA insider once told me that if you want to be drafted high, there's nothing like playing well in the NCAA tournament. That's intuitive, but also a bit of an insult to the NBA decision-makers. In what wacky world would a few flashy, luck-infused wins in a single elimination tournament overwhelm the combined insight of the years of scouting, interviews, measurements, evaluations and the like that teams tell us they perform?

Nevertheless, Berri and Schmidt have found the claim to be amazingly true. "A player who appears in the Final Four," they write, "can improve his draft position by about 12 spots." 12 spots! That's a ton! Other factors that they find affect draft position include points scored, shooting efficiency, assists, steals, blocked shots and height (relative to position). Interestingly, staying in school, but not improving as a player, was cause to fall an average of five spots in the draft -- which would seem to be an argument for coming out earlier, especially when you consider the author's evidence that even years after the fact, draft position has a heavy influence on playing time.

And here's the kicker. The authors found that playing for an NCAA champion in the year drafted is a statistically significant predictor that you will be less productive in the NBA.

Randy Foye and Jonny Flynn are Timberwolves exhibits 1 and 1a in overvaluing post-season college play in the face of a significantly larger body of regular-season work that suggests a different type and quality of player. One-and-done tourneys are no good way to judge college talent. There is too much that could go wrong in this small and quirky of a sample size to make any sort of conclusions about Player X, Y, or Z. If we ran the Wolves' front office, this is the time of year where we'd take a looonnnnngggg trip to Machu Picchu and the Inca Trail. There's not a very good chance that you are going to learn something about a player over the course of 1, 2, 3, 4, 5, or 6 games that you shouldn't have already gathered over the course of the previous 30.

The Hoopus Score does not take into consideration differences in conferences and strength of schedule. I tinkered with a version of the score that would allow for this but I think it works much better by subjectively putting players into tiers and then using the score to rank them. I have also adjusted the Hoopus Score so that it doesn't try to get 15 as the number of an average player. This time, I did away with trying to find an average and simply weighted efficiency scores according to things like position and age. I also added in two composite scores. The first one documents the ratio between usage rate and true shooting percentage and the 2nd one adds together block% and steal%. All of these numbers are then added together before the players are placed into subjective tiers and ranked.

The big change with this year's number is that I took all of the things I didn't use in the score (strength of schedule, conference ranking, height, weight, age, eyeball ranking, etc) and used them to place the players into tiers, which were then ranked out according to their own Hoopus Score.  I have provided an un-tiered list at the end of the draft board so you can see how everyone played out and how I put everyone into tiers.

With no further delay, here is the first version of our post season draft board:

Well folks, that about does it.  This is a relatively deep draft for big men and a fairly weak one for guards.  There are 4 guys at the top who all Wolves fans should feel good about, 2 or 3 risky potential picks, and then a whole lot of bench players.  It's a deep draft in the sense that there should be a lot of guys who can play minutes, but it's a very thin one in terms of sure things and starters.

Right now, my Wolves draft board looks like this: