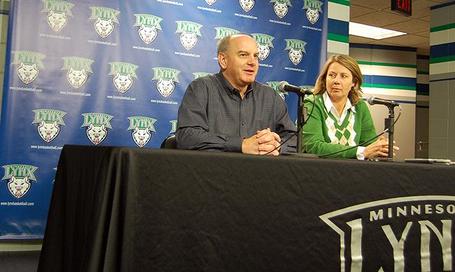 I know it's kind of hard to conceptualize, but there is a championship-quality professional basketball team in town and they own the 2nd and 3rd picks in today's WNBA Draft.

The Lynx are going to be stacked this year and they will be able to add two additional quality players to their roster. Can we get Roger Griffith and Cheryl Reeve to run the Wolves? Pretty please?

Tina Charles will probably be the first player off the board and this will leave the Lynx with their choice between Virginia guard Monica Wright (the best perimeter player in the draft), Stanford big Jayne Appel, and former Rutgers player Epiphanny Prince.  I think that they'll end up with Wright and Appel.

For those of you unfamiliar with the WNBA, landing Wright and Appel is the rough equivalent of getting Evan Turner and Derrick Favors in the NBA Draft.  Keep in mind that these young players are being added to a roster with multiple All Stars and an Olympian.  Yes, that does kick ass.

Here are a few Lynx links for those of you who want to read more about the 2 PM draft:

Enjoy the draft by a team that actually seems to know how to put together a winning squad. Here's hoping the Wolves can follow suit.
UPDATE: The Lynx select Monica Wright with the 2nd pick and Nebraska's Kelsey Griffin at #3.  Griffin is an excellent combo-forward.
UPDATE ii: Stephen Litel reports that there is a possible Minny trade in the works.
UPDATE iii: From Jonah Ballow's in-draft chat:
Jonah Ballow Says:
Lynx deal Kelsey Griffin for 2011 first and second round picks...more info coming soon...