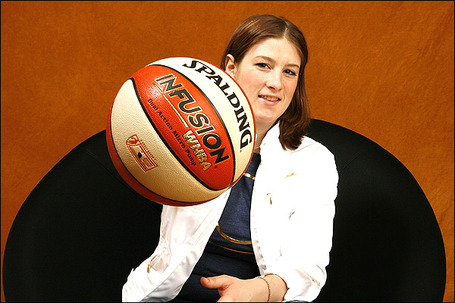 First of all, whoever thought that a white girl from Hutch would be featured on Blackchristiannews.com?  Me neither, but thanks for the internets!

The Lynx opened their home season on the back end of a back-to-back and they couldn't quite pull it out against the Washington Mystics.  Not being able to play Seimone Augustus and Candace Wiggins will do that to a team.

The game was most notable for it being Lindsay's return to Minny.  From a few pre-game words to in-game recipe videos featuring Whalen from Gold'n Plump, it was Whalen's night and...well, she could have had a better game.  That being said, my daughter wore a Whalen shirt and a Lynx hat while marveling at the fact that people were able to go watch women play basketball, and the night suddenly got a little bit sweeter.

As for the game itself...well, I was a bit distracted.  It was a daddy-daughter outing and I wasn't exactly paying a whole lot of attention.  The Lynx are playing with a 9 woman roster and they are down 3 big time rotation players (Augustus, Wiggins, and Rebekkah Brunson).  Monica Wright looks like the real deal and the Lynx are very close to being able to run out a 7-deep All Star-level lineup.  Once they get a few games under their belt, this could be the best non-Olympics women's basketball team in the world.  It really is insane how much talent is on this team.

Anywho, it was a long day and the Honey Do list still has a few items that need to be checked off before the weekend ends.  If you love basketball, go see the Lynx.  They are the best professional team in the state.

PS: If there is video of Cheryl Reeve going nuts on a technical or of Whalen giving out Gold'n Plump chicken recipes, please put the links in the comments.