Pimping Because I Can

Share All sharing options for: Pimping Because I Can 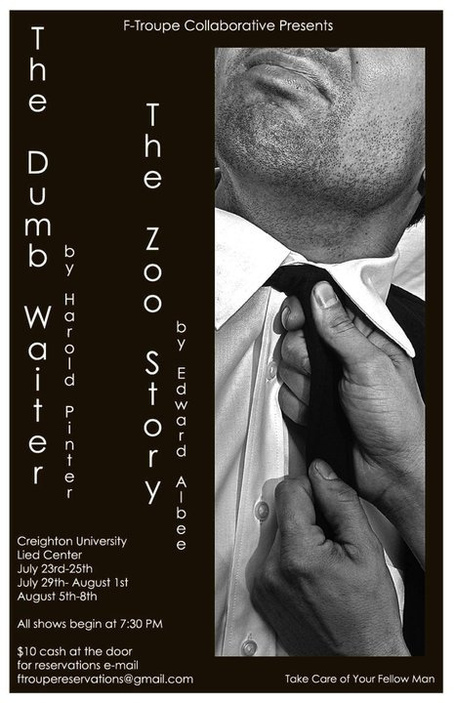 I didn't get to catch last night's game because I was in Omaha visiting some friends and checking out a rehearsal of the Omaha-based F-Troupe Collaborative's upcoming two-part feature of The Dumb Waiter and The Zoo Story.  Ok, my brother is a part of the troupe so that's the main reason why I'm giving the plug....plus they're really, really good.

Their last production was of Martin McDonagh's The Pillowman.  It was very well produced, and equally as well received, garnering several local acting and arts award nominations, including a best supporting actor nod for my bro. It also had gun play, which is a plus when it comes to local theater.

For those of you in the Omaha area, tickets to this play are only $10.  You will not find a better entertainment deal in town.  These guys absolutely know what they are doing and they deserve your support.  I suggest making night of it.  Start out with a nice light meal at McFoster's Natural Kind Cafe, walk over to Beertopia and grab a sixer or two for later in the night, check out the play, and then head on back to the Huber Haus for some late-night pretzels, meat, cheese, and, of course, beer.

PS: For those of you who want to learn more about the collaborative, their facebook page is located here.