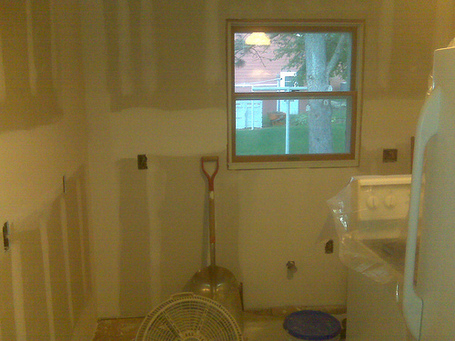 Slowly but surely it's beginning to take shape. When I last checked in I asked about the official beer of Hoopusdom. After another week of working on the kitchen, perhaps we should vote for the official Canis Hoopus whiskey, as I've become much more fond of two fingers of bourbon instead of a cold frosty one.

This kitchen remodel has done strange things to me. I don't know why but ever since the drywall went up all I can listen to is rap about drug dealing. Perhaps it's something I inhaled during construction. Maynholup will be happy to know that I have added some Z-Ro to the playlist. Clipse and Ghostface Killah top the proceedings. Although, I suppose it isn't all about drugs. I'm really feeling the new Big Boi album. I haven't listened to this much hip hop since college (circa mid-90s).

Anywho, I thought I'd check in to set up a vote for the Official Hoopus Beer. We'll run a mini-tourney. Tonight's vote will be for the out-of-staters, the non-Minnesota beers that were dropped here in the comments or via email. Later on we'll run the homer beer poll. In the meantime, drop me a line about some good music to listen to while remodeling. I have a bad feeling my daughters will be talking about coke scales and cold product if I keep up the current play list. Plus, I'm in something of a music drought and I need some inspiration. Outside of the rap, my latest musical kick has been a journey through the 70s: Kraftwerk, David Bowie, King Crimson, Neil Young, Brian Eno, Can, T-Rex, Funkadelic, Television, and early Joy Division. Looking back at it all, it's pretty amazing how Bowie ruled the 70s. Ziggy, Hunky, Aladdin, and the masterwork Low. He didn't have their fanbase, but that's an influential run on par with Revolver, Rubber Soul...well, you know the rest. Low is one of those albums that has never, ever left the ipod.

I think my next musical kick will be something international. I like highlife and I'll never turn down anything Cuban. What say you?