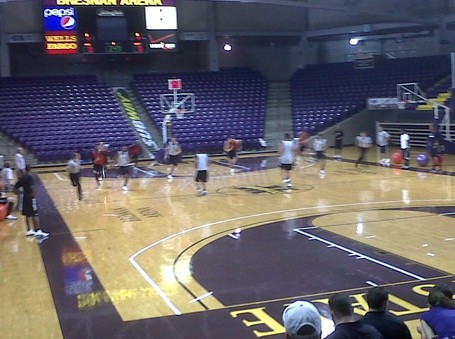 Follow us live at Twitter.  Up right now: Ridnour on Bassy.  Not exactly a match up we thought we'd see at the end of last season.

UPDATE: It was kind of nice to see some professional ball being played after a long few months of...well, there was the excellent USA performance at the FIBA World Championships, but it's kind of nice to be talking about the NBA again in a non-Melo trade context.

You obviously cannot tell a lot from a short peak at the squad in this sort of setting so I don't have a whole lot to report other than that it is immediately obvious that the Wolves have upgraded their wing players and they have some guys with legit NBA size.  Plus, they're obviously more athletic across the board (except at point, which is kind of funny considering all of the resources they have spent at the position over the last year or so).  Yeah, I know: Kahn goes on and on about length and athleticism while passing over probable BPAs in the draft--so there's still that sticky matter of having guys that are skilled, but the fact of the matter is that the Wolves have done a fairly decent job of collecting players that should (I repeat: should) be an upgrade over what they had on last year's roster.

The hot topic from the group watching the practice was that the most notable area of improvement was the team's big man depth. Darko Milicic, Nikola Pekovic, and even Kosta Koufos all have legit size and should (again: should) be improvements over the cache of guys they had last year at this time (Ryan Hollins, Stewie, Jared Reiner).  The caveat here is that a healthy Al Jefferson will be running the pick and roll in Utah and I have a hard time believing that anyone from the European wing of the Wolves locker room will play up to Big Al's level.  That filler job is going to fall to the team's lone present FIBA Championship player: Kevin Love.  Is he up to the task?  We'll have to wait and see.

On the wing, Martel Webster spent some time playing both the 2 and 3, Corey Brewer looked to be energized and somehow skinner, and Michael Beasley looked to be in shape and wanting to play the small forward position before leaving the scrimmage with an injured left hand.

At the point, the Wolves are going to see a healthy dose of Luke Ridnour and Sebastian Telfair.  It was kind of nice to see Bassy back out there in a Wolves uniform.  He's been my favorite Wolf for a while and he's a scrappy kind of player who was the most vocal guy out there on the court.  He didn't take a jump shot (good) but that probably means he still can't make one on a consistent basis (bad).

The sidelines were prowled by the team's Syracuse connection and Jonny Flynn was in a t-shirt while Wes Johnson could be seen with his hammy wrapped in ice. Other hammy issues for the night belonged to former Gopher and Roosevelt Teddy John Thomas, who has been invited to camp.  It was nice to see Thomas out there on the court.  I grew up playing in south Minneapolis and I remember Thomas from his junior high and senior high days.  I even got to play with him during a Clem Haskins basketball camp.  He most recently laced em' up for an Israeli league team and he is the last player from the doomed 97 Final Four team to still be playing professionally (after Bobby Jackson retired and Sam Jacobsen was waived from the Italian league).  Now, he's the old man of camp and likely in the middle of his last shot at pro ball.  I guess it makes me feel old more than anything else.

I'll be back at training camp on Tuesday so drop me a line in the comments if there are any questions you want me to ask.