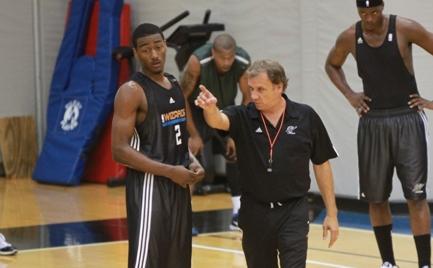 Flip Saunders returns to the Target Center tonight and will be bringing #1 overall pick John Wall with him.

The last time the Washington Wizards won a game away from the Verizon Center was April 9th, 2010, in Boston. The last time the Wizards won a game at the Target Center? March 9th, 2009, when their leading scorer was Caron Butler and Al Jefferson was still at home recovering from knee surgery. Only 5 players who played in that game remain on their respective rosters (Blatche, Young and McGee for Washington; Love and Telfair for Minnesota).

After trading Butler and Antawn Jamison last season, and moving Gilbert Arenas to Orlando back in December, the Wizards have clearly started the rebuilding phase. At the helm of that rebuilding phrase are head coach Flip Saunders and #1 overall pick John Wall. Wall is currently 4th in the Rookie of the Year race behind the Clippers' Blake Griffin and the Timberwolves' Wesley Johnson and Nikola Pekovic.

The Wolves, meanwhile, look to be without Michael Beasley tonight, who reaggravated his ankle injury against the Spurs on Tuesday night. Fortunately, the Wolves have one of the deepest benches in the league - when the Target Center is quiet enough, you can hear it recite Clausewitz - and Wesley Johnson needs to take advantage of this opportunity. 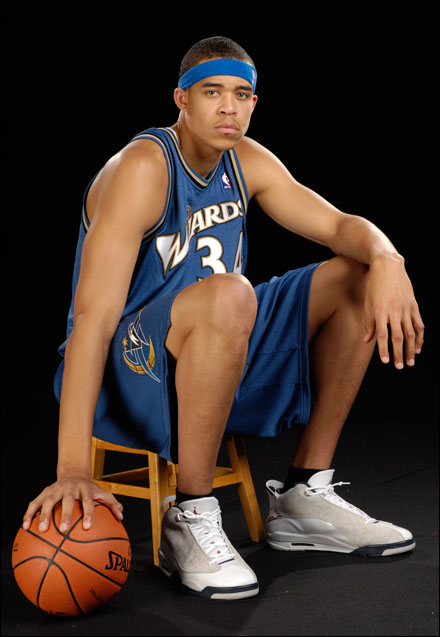 Did the Wizards have him sit on a stool this small to convince themselves they had a true 'big' man?

I've heard that this guy has potential. I know that he was invited to the Team USA tryouts. I've been told that he ranks among the league's most tantalizing prospects.

But its his third year in the league and I've yet to see how JaVale McGee is anything but another average center who has a lot of athleticism and not much else. He can throw down an alley-oop or two from John Wall, but he's clueless in the half-court game. He can block shots, but he can't defend pick-and-rolls and he doesn't have the strength to hold position on the block.

Having JaVale McGee as your starting center is like Seth Rogen playing the lead role in a superhero movie. You might be able to talk yourself into it for a couple of hours, but its never truly believable and you won't feel good about it. 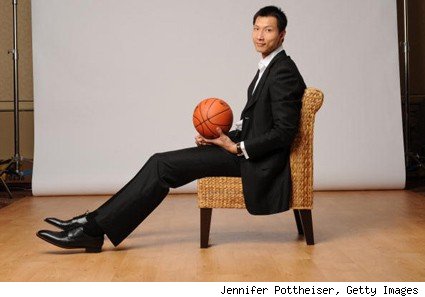 Wouldn't it be awesome to see this guy starting in the All-Star game?

Remember when, in order to get Yi Jianlian to sign with the Milwaukee Bucks, Senator Herb Kohl had to write a letter to Chinese officials in Hong Kong to assure them that Yi would get sufficient playing time? He's sure proven worthy of all that hubbub. This season, he can barely get off of the bench for the lowly Wizards and is only starting in this game because Andray Blatche is doubtful with a shoulder injury.

The guy is brutal at finishing around the rim - his 43.5% of shots in the basket area was the worst percentage among frontcourt players by a wide margin - and he's not much better from farther out. His rebounding is not particularly impressive and he's always been a subpar defender.

Given that he's really 25 years old - and not 23 like he is listed - there's not much more time for Yi to improve. It might be time for the NBA to give up on this project.

Kevin Love might grab about 40 rebounds tonight against this frontcourt tandem. 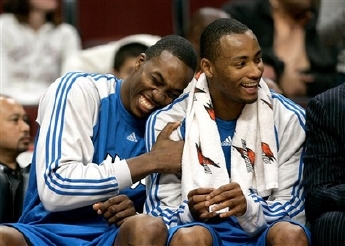 I hope you have good memories of your days in the playoffs. You might not see them again for a while.

All five of the Timberwolves' starters combined will make about $200K less than Rashard Lewis this season. By the way, I have to think that's its just a coincidence that after posting career best numbers in the 2006-07 season - then signing his monster contract - his numbers dropped off quite sharply and have not returned to that level ever since. Coincidence.

Now, after going from an East contender in Orlando to a rebuilding dead-end in Washington, one would have to think that Lewis will be extra motivated togive 100% in every game. I don't really think its much of a factor that he'll receive more than $66 million over the next three years regardless of how good or bad he plays. I mean, it's all about the game, right?

Wesley Johnson will likely start at the 3 spot for the injured Michael Beasley. I'm very intrigued by this, since I think small forward is Johnson's natural position. I want to see Wes have a breakout performance tonight. 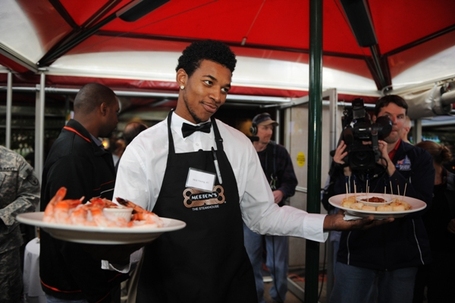 Nick Young preparing for his next career.

McGee, Yi, Lewis, Young...I'm starting to sense a theme here. Does anyone in the Wizards' front office know what 'basketball IQ' means? Nick Young is an incredible jumper with a great shot who occasionally shows flashes. Against the Kings, for instance, Young scored 43 and single-handedly disproved the "Hot Hand Theory". Too bad for the Wizards that performances like this are aberrations.

He's a poor dribbler who can't see the floor, ranking dead last in assist ratio among shooting guards last season. He can leap out of the building and he's 6-6, but for some reason, the Wolves' own Luke Ridnour was one of many guards who outrebounded Young last year. He's also one of the worst defensive players at his position, mostly because of a lack of effort .

While the Wolves do tend to allow players like Young to occasionally get hot from downtown, Corey Brewer will lock him down and make Young work for his points. After a career-high in points, Young might have a career-high in turnovers tonight. 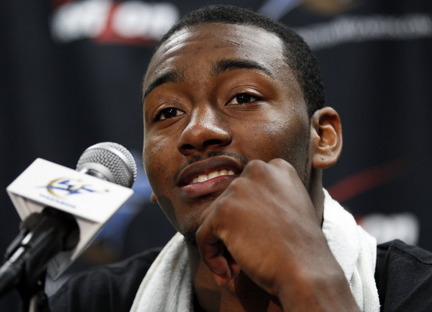 How do you think it feels to represent a draft class that is so bad it couldn't even produce a Rookie of the Year award?

When I was at the Timberwolves' Draft Lottery party at the Artist Formerly Known as NBA City (seriously...Hubert's was the best name you could come up with for a sports bar at the Target Center? Was Claude's taken?), I was crushed when I heard the team's name pulled out of the 4th envelope. Of course, I wanted Evan Turner with that #1 pick.

After all, we already have a promising All-Star level point guard in Jonny Flynn and another point guard waiting overseas who is as good as Jason Kidd (when someone brings up Rubio's stats, just tell them that Euro stats don't translate to the NBA and then call them fascist).

But I would've happily taken John Wall second. He was the crown jewel of the draft, and according to almost everyone but myself, was the consensus #1 overall pick. But just one question: was this what we were waiting for? I was expecting a great point guard. I got a decent point guard. I want some of my anticipation back.

I guess it all turned out for the best. Wall went to the Wizards and the Wolves were able to draft Wesley Johnson, who is quickly endearing himself to the fans with his aggressive and decisive play. We were also able to sign Luke Ridnour, a career-backup who is so good that even a prospect like Jonny Flynn - only drafted 6th last year - can't start over him.

I guess its true what they say. When God closes a door, he opens a 15th story window. 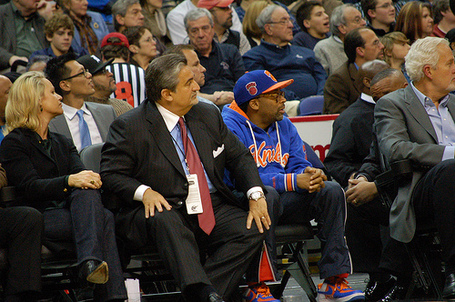 Which one of these guys will be the first to see his respective team win a playoff series?

Man, it feels good to be out of the rebuilding phase. The Wizards are at the beginning, and while John Wall brings some excitement to the team, it will take a few more years to get back to the playoffs. The Timberwolves, meanwhile, are just getting out of that phase and are transitioning to a new one: Western Conference contender. Dynasty is up next.