The Timberwolves are at least still winning the games they should (minus, perhaps, a rather ugly OT loss to the maligned Bobcats...) The Wizards came into tonight's tilt at 10-26, with 18 straight losses on the road this season by an average of 14 points. They haven't won a road game all season. They were really asking to be beat in a way, and the Wolves beat them.

Without Beasley, the Wolves really needed a couple players to step up. Kevin Love brought his game, like he has pretty much every night this season. Who would help him out in B-Easy's absence? Well, it came from a couple of unexpected sources tonight....Corey Brewer and Darko Milicic....but they'll take it. Things like that are just the nature of rebuilding ballclubs.

Tonight's tilt was an interesting case study in rebuilding directions. On one street, you have the Wolves, who have implemented a system in concrete but are struggling to find the right talent to play it. On the other street, the Wizards have amassed a huge amount of talent but can't get any of it to fit together.

The Wolves tonight did a number of rather surprising things to secure a victory: they ended the game on the right side of the assists, turnovers, and fouls battle, and closed out the fourth quarter strong. Midway through the fourth, the Wizards went on a mini-run to take a 94-90 lead. That's usually when the Wolves fall apart with a string of bad shots and unforced turnovers. Tonight, not so. Instead the Wolves got down to business: over the next 2 minutes of the game, the Wolves got a crazy behind-the-back dribble layup from Darko, followed by a three from Love to take the lead again. Then a perfectly executed fastbreak to get Darko a power dunk, another perfectly executed halfcourt set (possibly the single best Wolves possession of the entire season) for an Ellington three, then another transition three from Love to effectively put the game away. 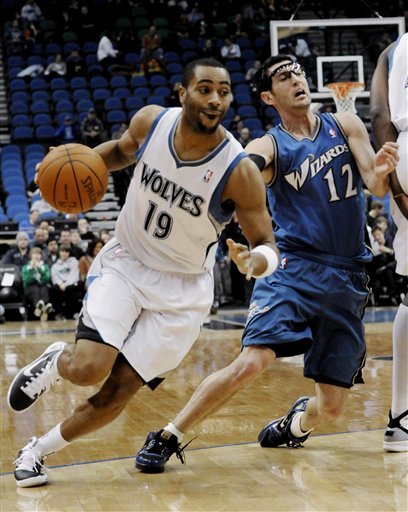 During that same span, the Wizards managed just a single point....a JaVale McGee free throw. Otherwise they looked...well....Wolfish, with a string of turnovers, fouls and bad shot selection. Over the last 6 minutes of the game, the Wolves outscored the Wizards 19-3.

This really was an absolute must-win for the Wolves, facing a team just as bad as themselves in a situation where they were almost pre-destined to lose from the beginning. The Wolves need to, at a minimum, keep pace with the Wizards and Nets and Pistons and Raptors in that half-step above outright disaster that the Kings and Cavaliers reside in. The win tonight puts some distance between us and Sacramento again, which is faint praise but a step in the right direction nonetheless.

And I'm not going to make a case for which path is the right path rebuilding teams should take. There's so many individual things that come into play, with personalities, coaches, location, and sheer luck (hello, Clippers) to say there's any one blueprint everyone should follow. But for tonight, Washington is very much in "talent collection" mode. Their lack of cohesiveness is something to be expected from a team just grabbing players left and right without any thought to how they will (or won't) complement each other. If the Wolves are going to take the system path and stress the chemistry side of things, then they should win these games. They should out-execute opponents in close-game situations when facing a team that doesn't have a guiding strategy or any appreciable intangibles. This was a situation the Wolves should have been able to take advantage of, so it's nice to see that they actually did.

Wolves are at home again Saturday against the Orlando Magic, who are 9-2 since the trades for Turkoglu, Richardson and Arenas. So.....ya....7:00 PM. Don't miss it.