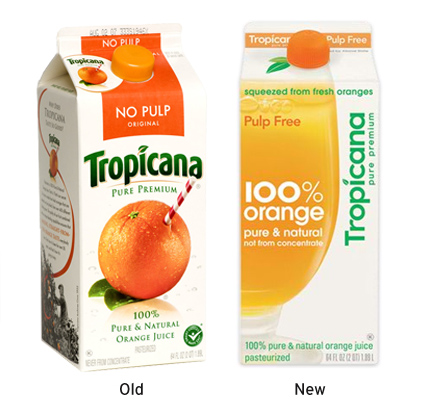 From the New York Times:

IT took 24 years, but PepsiCo now has its own version of New Coke.

The PepsiCo Americas Beverages division of PepsiCo is bowing to public demand and scrapping the changes made to a flagship product, Tropicana Pure Premium orange juice. Redesigned packaging that was introduced in early January is being discontinued, executives plan to announce on Monday, and the previous version will be brought back in the next month.

Also returning will be the longtime Tropicana brand symbol, an orange from which a straw protrudes. The symbol, meant to evoke fresh taste, had been supplanted on the new packages by a glass of orange juice.

The about-face comes after consumers complained about the makeover in letters, e-mail messages and telephone calls and clamored for a return of the original look.

It was not the volume of the outcries that led to the corporate change of heart, Mr. Campbell said, because "it was a fraction of a percent of the people who buy the product."

Rather, the criticism is being heeded because it came, Mr. Campbell said in a telephone interview on Friday, from some of "our most loyal consumers."

"We underestimated the deep emotional bond" they had with the original packaging, he added. "Those consumers are very important to us, so we responded."

The only thing that changed was the box.

One of the most remarkable things about David Kahn's tenure as POBO is that he has taken the 2008/09 Wolves, added 6 first round draft picks, Al Jefferson, Ramon Sessions, and over $12 million spent on Luke Ridnour, Darko Milicic, and Nikola Pekovic and turned them into the 2008/09 Wolves. The carton has been updated from Blueprint to United We Run, but the taste remains the same.

For the most part, the 2008/09 squad was the slightly better team.  There are many factors that can account for this fact (older personnel, more experience, etc), but it's fairly hard to argue with the results.  From free throws to turnovers to point differential, the 2008 squad was able to slightly out-produce this year's squad on a number of levels.  Even in areas where this year's team has the edge, it's not by a whole lot. Least of all not enough to really pick nits over.

The other big caveat between the two teams (aside form experience/age) is pace.  The 2008 squad was much more deliberate (at least it was until McHale took over).  While this could be read as something of an equalizer between the two squads in terms of overall numbers, it also could be read as an indictment of a coaching staff that would choose to run an inexperienced team with the #1 pace in all of professional basketball.

Let's take a quick look at how the two squads break down by position.  Here are the positional comparisons from 2008/09 after 40 games:

Here they are this year:

It really is amazing how badly this team has been torn apart over the years at the point.  What is even more amazing is that the 2008/09 Wolves were able to break about even at the 2.  Randy Foye really shot the ball well for about a month or so. This year's team features some solid action at the 4.  You know who that is.

How do things break down at the individual level?

Unfortunately, I don't have good spreadsheet data on individual players from back in 2008 so we'll just have to roll the season-end stats into the comparison.  (I have overview stats on the players here, but not in spreadsheet form).  I also left out some end-of-the-rotation players because they're virtually meaningless to this discussion.

What can we tell from these numbers?  First of all, this year's Kevin Love is really, really, really good.  Second, I've been selling Luke Ridnour short this year.  He is the best point guard this team has had since Sam Cassell, and that's kind of crazy.  Third, Al Jefferson was a fairly productive player, especially in comparison to this year's volume scorer.  Despite his ability to score from the perimeter and off the dribble, Michael Beasley is quite a ways away from producing on a level near what Al Jefferson did in 2008.

Beyond that, it's pretty much a wash with anyone who played a significant amount of minutes.  Martel Webster and Ryan Gomes are in the same boat.  This year's Corey Brewer doesn't have anything on the 2008 version or Rodney Carney.  Bassy is Bassy no matter what.  The only big change is comparing Darko to Collins, and that doesn't take into account that Al Jefferson also played a fair chunk of time at the 5.

Why bring all of this up?  The team is moving sideways.  It's offering its fans the same thing they had in 2008/09.  The only difference is that this time, instead of hating the new picture on the carton, customers seem to be happy with the shiny, long and athletic packaging.  It's a reverse Tropicana.

This current rebuilding project is running out of time and resources.  It is being headed up by a guy who thinks that Jonny Flynn and Darko Milicic are potential All Stars and whose sole current basketball philosophy is that he needs to collect as many players who can catch Ricky Rubio ally-oops as possible.  Its cap space becomes more and more inflexible with each passing POBO Threshold. This year's draft is something of a last  hurrah for the assets accumulated in the KG aftermath.  Unfortunately, it is a weak draft that could be made even weaker by college prospects not wanting to lose a year of development should the NBA have CBA issues that cut into the regular season.  It could be heavy on upper classmen and European players and you should prepare yourself for Kyle Singler.

To further highlight an obvious point: Kahn's rear-end is really on the line when it comes to how the cap space is utilized in a pre-deadline deal.  They absolutely need to add someone who matters and who is a known commodity. If they don't...oi.

Does this team have more potential?  I honestly don't know what that means.  It's hard to believe that Kevin Love could play any better as a 22 year old 3rd year pro.  It's hard to believe that Wes Johnson is going to develop a handle that increases his free throws while at the same time lowering his turnover rate.  If it could be guaranteed that he'd play as well as Mike Miller, I'd take that bet immediately.  (FWIW, and to say something positive about the guy, I think he has a decent future as a solid two way player at the 3.  Do you think Beasley could be talked into anchoring the 2nd unit?)

At the very best they're a 24 or 25 win team, just like they were back in 2008/09.  Al Jefferson + the old Kevin Love is pretty much equal to Michael Beasley + the new Kevin Love.  (It should be noted that these two combos present similar defensive and positional problems. I'll do some additional digging on how these pairings worked together in a future post.)  Beyond that, it's a mountain of interchangeable average (at best) players (although, admittedly I am having 2nd thoughts about moving Luke Ridnour up a bit, as he's playing really well right now).

I do think that they should have more wins than what they currently have and that this has a large amount to do with the system they run and the rate at which they run it at.  One of Kahn's promises to the fan base when he was hired was that the Wolves would lead the league in player development.  This simply isn't happening.  If anything, the coaching staff runs a system that highlights the weaknesses of its players.

Oh well, now that Bassy is back hopefully I won't be as grumpy about the squad.  Maybe they can take advantage of a favorable February schedule to rattle off some unexpected victories, giving us something similar to 08/09's winning January.  It's getting really old watching this team only to realize that they're right back at square one.  It's getting really old hearing new marketing campaign after new marketing campaign telling us how the juice is somehow different and more fresh.  It's getting really old watching the POBO blow through draft assets like nobody's business while getting very little in return.  Something needs to change.  Here's hoping they can work some magic before the trade deadline because that's the last big window they have to add a known product that matters.  Otherwise, your fandom is at the mercy of Kahn's taste in draft picks and free agents, and nobody likes to root for stale juice.