The Ethos of Unclimbable Mountains

Share All sharing options for: The Ethos of Unclimbable Mountains

The Timberwolves had this game. And the reason you aren't going to blink about that is because we say it seemingly every night.

For the third time in in four games, the Wolves were facing a team badly depleted by injuries coming off of a very difficult stretch of games in their schedule. The Nuggets were without Carmelo Anthony, Kenyon Martin, and Nene. The Celtics were without Kevin Garnett, and just getting Rajon Rondo back. And then tonight, the Cats were missing Gerald Wallace and resident Wolves-killers Stephen Jackson and Nazr Mohammed. All three games, the Wolves "had won" at one point. All three games the Wolves had commanding leads late-erish in the games. And all three the Wolves managed to lose anyway. They climbed 9/10 of the way up the mountain, but didn't....couldn't.....reach the top.

This is past just growing pains. Even with a team this young, this new, there's no reason the Wolves should be losing a game like this. I mean, we're talking about a Bobcats team so injury-bitten they were starting Gerald Henderson and Derrick and Kwame Brown.

Not only that, but the Wolves got two excellent performances from their top two players. Michael Beasley and Kevin Love combined for 63 points, 27 rebounds, 7 assists and only turned the ball over twice between the two of them. Except for Beas hitting a couple more of his free throws, you could not have asked for a better performance from those two.

And it's not like the team as a whole played terrible. They shot 45%....40% from three....and although they only hit 63% of their free throws, they took 30 of them (so 19 makes....respectable). They got after it on the glass in the second half to finish with 53 rebounds, and kept the turnovers to a manageable 16. And they lost.

So how does 'Sota lose a game where no obvious, general errors were made in? Well, it starts with the timing. Rebounding, for example: in the first half, the Wolves got murdered on the glass...by Kwame Brown of all people. The Cats grabbed 7 offensive boards in the first quarter alone, and nearly all of the 14 point deficit at halftime was second-chance points. Sure, the Wolves beat the Cats on the glass in the end...but only after digging themselves into a hole first.

Timing of the rotations: it didn't take any special observational powers to see that Jonny Flynn, Darko Milicic and Kosta Koufos were pretty bad tonight. Flynn was Flynn....ineffective, flambouyant passes, turnstile defense. Darko committed 5 turnovers and 5 fouls in 26 minutes....unacceptably high figures. And Kosta was just all lead hands and starry eyes. No awareness on the defensive end and a couple of shot attempts that are out there in Gerald Green territory....a 6 foot, contested jump shot that barely hit the rim, and a left handed hook he slung so high he nearly hit the shot clock.

And yet Jonny is out there to close regulation. Darko plays the entire overtime. Kevin Love got pulled for no reason in the first quarter with the Wolves ahead by 2, and by the time he checks back in the team is down by 6.

And then timing of the turnovers: 16 turnovers is a little excessive, but it's not an egregious number. It's well within manageable limits, and (sadly) below the Wolves' season average as a team. But when the turnovers happen matter as much as how many.

The most costly turnover of the night was Wes Johnson with about 1:30 left in the game and the Wolves up 95-90. A touch of ball pressure from Henderson and Wes just drops it out of bounds.

Wes' handles need a lot of work, and that's one of the reasons why. That's a very costly mistake. If the Wolves had scored on that play, it would have been a 3 possession difference and the game would be all but over. Instead, DJ Augustin goes down to the other end and knocks down a three, and instead of it being 97 or 98 to 90, it's 95 to 93.

And so you look at all the things that happened in the game that cost the Wolves a win; not just the what but the when and the how....y'know, it's an art form. It's a symbolic...and fairly deliberate...sequence of decisions and events that repeat themselves enough for us, as fans, to look at it and go "I recognize that". These things have become patterns and themes we see on a nightly basis to the point that we just expect them to happen before the fact. 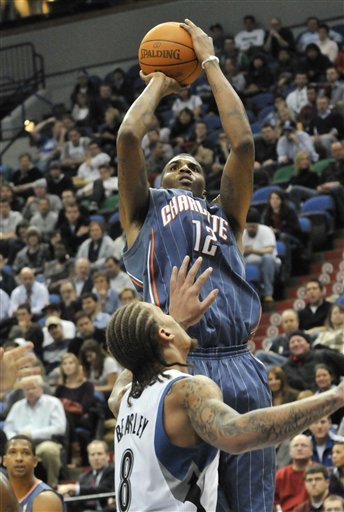 What the Wolves have amounted to so far this season is way, way beyond nominal rhetoric at this point. Yes, this team is very young, very inexperienced, has a lot of new faces....etc etc. But this constant inability to win games that are already won is more than just the collection of would-be college seniors and what have you. This is embedded in the Wolves' mindset now. Perfecting the Art of Losing is the locker room culture this season. It's a Timberwolves Ethos that's in our minds and their minds that says closing out close contests is a mountain that can't be climbed.

And the fans aren't stupid. Even though most of them aren't as hardcore about it as we are, they see it. You only had to listen to the boos rain down in the first half to realize it. They knew the Bobcats weren't healthy, and that this was a game the Wolves should have taken easily, and that losing these close games is endemic to this team. Read the Facebook comments, read Zgoda's blog, check Twitter...everyone knows that this isn't just the mistakes of youth playing out here.

So here's the question: where does this come from? Who or what is responsible for this mindset? If we boil it all down to the origin point, what we get is basically a team playing too fast for its own good, in a system that minimizes some of its best talents, and built on a couple players who came into the season having proven basically nothing. And all that has a common denominator: management. The guy who picked the ingredients (Kahn) and the guy who's cooking with them (Rambis).

A couple of you, in the game thread, made some comments about how a bad loss to a bad team had to be about the last straw for the powers that be in Target Center. Well....you guys may be on to something a lot more than you realize.

Something to think about.

And that's really the bottom line of it all....there's a lot of progress being made by a lot of players, but taken as a whole the team is a mess. So again, the 'million dollar question: if the players are getting better but the team is getting worse, who's holding things back? Hmmm.

Wolves are home again Friday against the Portland Trailblazers. 7:00PM. You know the drill.