Share All sharing options for: Glen Taylor Buffetts the Timberwolves 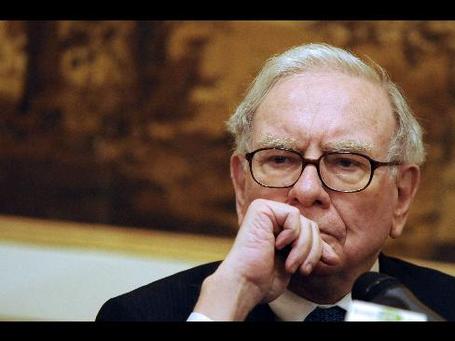 I just finished reading one of the most fascinating books I've ever picked up. The Snowball. The one and only biography of the unparalleled Warren Buffett, the official second-richest man on earth. I highly recommend it. Alice Schroeder has written one of the most candid life stories you may ever read.

For being as rich as he is, Warren Buffett has as simple an existence as one could imagine. He still lives in a simple two story house in a quiet neighborhood. He still works out of a simple wood-panelled office in what amounts to a strip mall, sitting behind the same wooden desk his grandfather ran the family grocery store from, and his father used as a Senator.

He started his fortune as a paperboy at the age of 14, running several high-profile routes that normally would be handled by men 10 years older than him. He now owns Berkshire-Hathaway, a textile shop turned business conglomerate, which has significant holdings or outright owns hundreds of companies.....businesses like GEICO, General Re, NetJets, , Fruit of the Loom, Pampered Chef, and the Buffalo Daily News. And through it all, he has hardly changed.

His philosophy on food is "If a 3 year old won't eat it, neither will I". His philosophy on inheritance is there shouldn't be any. He strongly opposes what he calls "dynastic wealth". "It's like choosing the 2020 Olympic athletes by picking the children of the 2012 winners". Nearly all the money his children and grandchildren have received from him has been earmarked for charity. He personally will turn over nearly his entire personal wealth...some $37 billion....to the foundation of his close friend and the only man with more money than himself, Bill Gates. And despite his vast fortune, constant inventions, unprecendented insights, and innumerable economic innovations, Buffet has just two core philosophies when it comes to buying and running businesses. Philosophies Papa Glen has finally applied to our dear Timberwolves in hiring Rick Adelman.

Buffett's first and biggest mentor was the old Wall Street lion, Ben Graham, who wrote the two Bibles of investing....The Intelligent Investor and Security Analysis.....and worked both at his partnership Graham-Newman, and taught economics at . Graham's investing philosophy could be summed up in the title of his regular Wall Street Journal column: Is American Business Worth More Dead than Alive? The underlying principle was that the heart of investing was to buy up dying companies....companies whos stock was next to worthless, because the profits to be made by liquidating would exceed the price paid for its stock ownership. It was a system of bargain-bin shopping.

Would anyone dispute that David Kahn is a bargain-bin executive? That the main reason he has his job is that he's cheaper and more tolerant of the nonsense than, say, Dennis Lindsay or Randy Pfund? David Kahn is the dying company with nearly worthless stock who got a last investment because of the price. The problem is, of course, that basketball executives have no liquidation value. They drain you of capital while they're operating, and when they're gone, they're simply gone.

On the other hand, we have Rick Adelman. His "stock" price is rather prohibitive: upwards of $5 million a year. No coach outside of Phil Jackson gets paid that kind of money. But with that price comes success. Adelman is one of the most proven coaches out there. His career winning percentage of .605 is shocking for a coach who's been in the business for 20 years. In fact, in those 20 years, he's had just one losing season. He has a successful basketball philosophy expressed through a successful offensive system. He has a built in, familiar...almost fatherly, relationship with Kevin Love. And his hiring seems to all but guarantee the eventual firing of David Kahn.

Warren Buffet was taught this lesson by his eventual business partner, Charlie Munger. "Charlie was quick to pick up on it. I was a slow learner". Like Bill Gates, like just about any conglomerate rich guy out there...including Glen Taylor...Buffett didn't and doesn't want to be involved in the day-to-day operations of all the companies he has stake in. He wants to manage the top tier and let the details be handled autonomously by competent local management. Buffet was not happy when he had to take active roles in the management duties of GEICO, Salomons Investment, or Coca-Cola. Glen Taylor was not happy with having to get reinvolved with the details of Taylor Corp. or the Timberwolves. Rick Adelman is a step towards preventing that from happening again.

In the early 1990s, one of Buffett's biggest investments....the brokerage firm Salomons Brothers.....came under federal indictment for making illegal bids on government bonds. Law prevented any one company from bidding more than 35% of the total issues, to prevent any one firm from gaining a monopoly on them. Salomon itself had done this many times before the law was instated. In defiance to the law....and perhaps as a direct protest....Salomons' government division proceeded to make multiple 100% bids in the following years, working behind the scenes with several front companies to take upwards of 87% of the bond issues, then cover up the evidence....even from Warren, who knew nothing about it until far too late. After the first incident, the Treasury issued a warning letter to Salomons threatening revoke its bond license, which would effectively shut the firm down...a "proverbial gun to the head", as Buffett would put it later. But the bond division, headed by a man named Paul Mozer, proceeded to make a second %100 bid anyway.

The fallout nearly cost Buffett everything. Salomons was 's largest holding and the biggest government bond trader of its time. Suddenly Buffett found his biggest investment under a massive SEC investigation, while he himself was attacked in the media and political circles daily for green-lighting fraud felonies. Buffett of course, never actually did. Like any company he invested in, let Salomon operate on its own, and was only involved with capital allocation through . But Salomons was now a toxic company, and he was guilty by association. The assault on his reputation was more than he was willing to put up with.

Salomons and its arbs division were headed by dear friends of Buffett's, John Gutfreund and John Meriwether, respectively. To clear the investigation…and his name…Buffett railroaded them both anyway. Meriwether, despite unanimous support from Salomons' trades division, was fired. Gutfreund was not only fired, but took his case to arbitration and got nothing in severance pay as well. They had damaged Buffett’s dignity in the business community. It was something he would not tolerate.

There is no question that the Timberwolves have been the laughingstock of the NBA for the past few years. And if we’re truly honest, there’s really just one person responsible for that. "Long and athletic". "Manna from Heaven". "He’s kind of a schmuck". "He smoked a little too much marijuana". "Some pretty incredible storylines". "Write me a report". "Dear Timberwolves fans…." It’s a two-year running joke with no punchline, with the lady co-tenets winning more games in 42 tries than they have in 164. Somehow, David Kahn has managed to out-Clipper the Clippers. People like the Clippers. People think the Clippers have a bright future now. What do they think about the Pups? 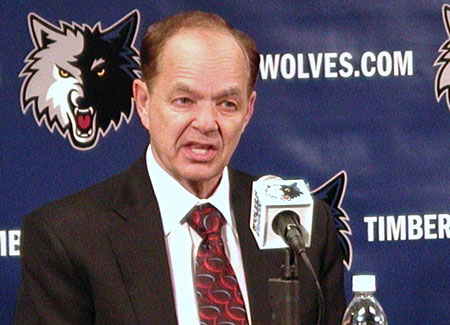 We spoke at length about this before the coaching search began: the Wolves’ office is a toxic environment. We were wrong that no one would be willing to take the head coaching job (and thank God we were), but we can plainly see how dysfunctional the management is. The consistent gaffes and even more consistent losing eroded what little esteem the club still held from the Garnett days, and the criticism finally got to a point that Glen Taylor apparently wasn’t willing to put up with. His team was toxic….the office no one wanted to work in, and the club (and location) no player wanted to be ‘exiled’ to. Further, he himself had become the target.

So what Rick Adelman really is….more than a proven name or a winning coach….is Glen Taylor’s big withdrawal from the bank of reputation. That’s why the team was willing to wait all summer for his answer. Why they locked him up at the start of a season that’s likely not going to be played, and why they’re paying him $5 million a year to do so. Adelman is Glen Taylor’s public statement that Glen Taylor is not a cheapskate, not a bargain-bin shopper. He paid a heavy price to try and put his team back in good standing with the league, his peers, and us…the basketball community.

For once, the bizarreness of a Timberwolves offseason has been the refreshing lack of bizarreness. Kurt Rambis’ homework nonwithstanding, the team has hit three home runs this summer: drafting Derrick Williams, bringing in Ricky Rubio, and signing Rick Adelman. Between that and the pathetic seasons the Twins and Vikings had/are having, the Timberwolves were indeed successfully poised to capture the hearts and imaginations of ‘Sota sports fans. And Glen Taylor was ready to recapture his lost prestige.

It’s a shame the lockout might wipe all that away.