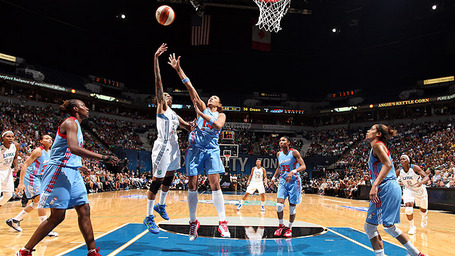 Well....not entirely the end. But let's be honest. Seimone Augustus pretty mush covers the entirety of game 2. Is there anything she can't do?

Here's the deal: the Dream got clever and threw a wrench into the Lynx's gameplan. They got back their 6'5" center Erika de Souza (who missed game one to compete with her native Brazillian Nationals team) and then promptly did something they haven't done pretty much all year....start Angel McCoughtry at small forward. Uh-oh.

Seimone to the rescue again.

I thought there was no way Augustus could top her game 1 performance in the conference finals, when she out-dueled Diana Taurasi. But this was definitely far more impressive. Not only did she get the best of McCoughtry in the box score, but she was the reason she got the best of McCoughtry. When Moore went to the bench, Seimone suddenly found herself having to do everything. Not only did she need to carry the offense....which she did brilliantly (36 points on 11-14 shooting, versus McCoughtry's 38 on 10-22 shooting), but she also needed to fill in for Moore on defense and guard McCoughtry on the other end. After scoring 25 in the first half, Angel scored only 13 in the second half on just 2-13 shooting. Most...if not all...of that was Seimone.

Augustus was exhausted at the end of this one. Absolutely exhausted. Michael-Jordan-playing-through-the-flu exhausted. And she earned it. She got stuck with an impossible assignment tonight...carry the team's offense and shut down the other team's best player at the same time....and she did it anyway. Because she's Seimone Augustus, and apparently Seimone Augustus doesn't believe in impossible.