Minnesota Lynx Have 27.6% Chance of the #1 Overall Pick

Share All sharing options for: Minnesota Lynx Have 27.6% Chance of the #1 Overall Pick 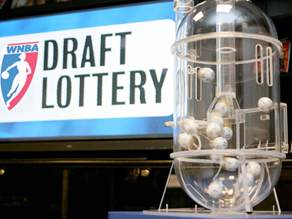 While the NBA and its players continue to hash out a deal, the WNBA Draft Lottery will be held today, Thursday, November 10th, in New York to determine the top four picks in the 2012 WNBA Draft.

The Minnesota Lynx have won the WNBA Draft Lottery in two consecutive seasons (they traded the pick in 2010 to acquire Lindsay Whalen and drafted Maya Moore in 2011) and own the Washington Mystics' 1st round pick in this year's draft, which gives them a 27.6% chance to win the overall #1 pick for 2012. They acquired the pick after trading forward Nicky Anosike to the Mystics two days before the 2011 draft.

After those four, the remaining order for the first round is:

Top prospects for this season's 2012 WNBA Draft include:

As the WNBA offseason progresses, I'll definitely be posting more information about these draft prospects and who the Lynx should take with their top-4 pick and their #12 overall pick, as well as any other offseason developments.