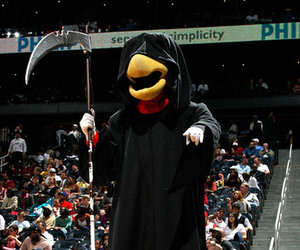 After a disappointing 2010-2011 campaign in which they went 17-65, the Minnesota Timberwolves have three new rookies, a new coach and a bunch of new reasons to be excited about the future of this team. There has been an audible buzz around the Twin Cities and greater Minnesota for the past month in anticipation of tonight's home opener against the Atlanta Hawks.

Fresh off of the Minnesota Lynx' WNBA championship run, MInneapolis is once again becoming a basketball town and fans are ready to relive the days when George Mikan dominated the paint and Sid Hartman was the David Kahn of his day.

They say a journey of a thousand miles begins with a single step. Clearly, whoever said that never took stairs two-at-a-time. Anyhow, let's break down the latest step in the Wolves' march towards an NBA dynasty: 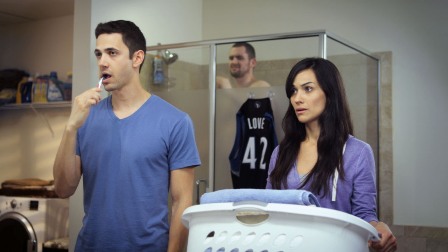 In a new effort to personally connect with fans, such as Kevin Durant showing up to play in a fan's flag football game, Kevin Love prepared for tonight's game in a random fan's bathroom.

It's time to do the smart thing and start Kevin Love at center. Many people on this website who are smarter than I am have made the case for Love at center, and I'm sure if you ask them nicely, they'll repeat themselves. I think it will give the Wolves the opportunity to start the team's best five players.

Love had a brilliant 2011 campaign. He was a stat-fan's wet dream and beat out guys like LeBron James and Kobe Bryant in categories such as Win Scores, Efficiency and PER. He might, in fact, be the best player in the entire NBA. Single-handedly winning 17 games should be enough for that accolade. Even Teen Wolf didn't win that many by himself.

Tonight, Love goes up against Al Horford. Horford is great if you like undersized centers who are playing out of position. Horford had 182 total offensive rebounds last season. Kevin Love did that in one game. Twice. I'm pretty sure. Somebody better find Chris Richard and tell him he's needed to replace this bum on the Hawks.

If Michael Beasley's production this season is half as good as his organizing abilities for the "All-Star Classic", Beasley should expect to receive his first "All-Star" selection.

First of all, let me just say that anyone who can rip open a basketball with his bare hands like that should never be demoted to a "sixth man". Michael Beasley said that he wants to be a leader this season and you can't lead from the bench. Move Love to center, start Beasley at power forward and watch the wins roll in.

Atlanta is going to start Josh Smith at power forward in the opener. Smith really has nothing special about him. He can jump a little bit. He can block a shot or two. He shoots the basketball pretty poorly. He's mostly a volume scorer who can't rebound well and has a weak jump shot. If he were on the Timberwolves, he'd be third on the depth chart behind Beasley and Anthony Tolliver.

Beasley will easily get the best of this matchup. Josh Smith would never get an invite to the "All-Star Classic". 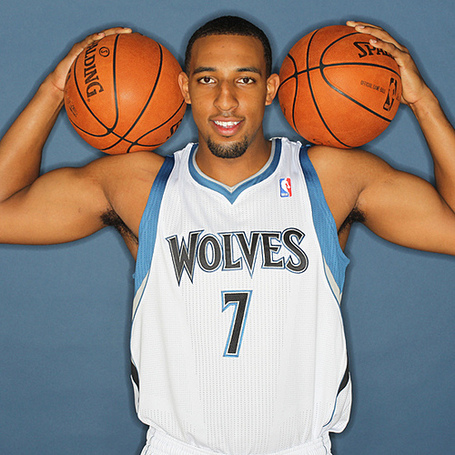 The ever popular, "I can hold two basketballs at the same time" photo op.

Williams is poised to excited Target Center with his leaping ability and athleticism. I believe he'll get the opening day start over Martell Webster for this reason. I also think he'll win the 2012 Rookie of the Year award over Kyrie Irving.

Marvin Williams, meanwhile, is making a name for himself as one of the biggest draft busts of the last decade. 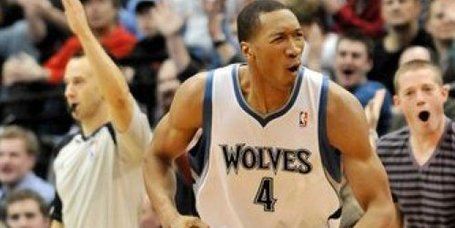 Wesley Johnson and a fan react to the ending of this season's Breaking Bad finale.

Fans in Minnesota may not have been thrilled with Wesley Johnson's first season. He's too passive. He's not a great defender. He disappears for several plays in a row.

Yet, as poorly as Wesley may have played, at least he wasn't one of the main causes of the NBA lockout like Joe Johnson. Thanks to his $2000 million over 3 years contract, and not coming close to having the production to justify such a contract, NBA owners felt it was necessary to protect themselves from making similar mistakes in the future.

It takes a special kind of awful to provoke a labor strike. 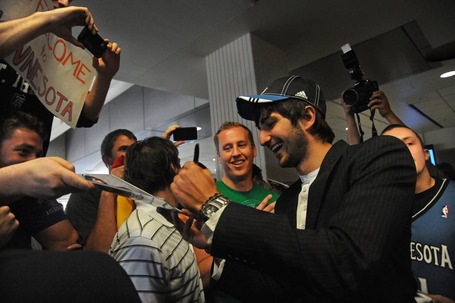 In about twenty years, that autograph will be worth about 2% of BRI.

Even if Luke Ridnour winds up starting at point guard on Opening Night against the Hawks, I think every fan in attendance would tell you that he or she would rather see the Spanish kid in the game. No disrespect to Mr. Ridnour, but after two long years of great expectations, we're ready to see what makes Ricky not like anyone else.

Give him the ball and let's see the greatest foreign point guard in NBA history go to work.

Jeff Teague sounds like an injury that a 45-year-old man gets while playing touch football in the backyard. If he were drafted and had a buyout, the Hawks would've said, "see you later. Have fun in Spain". He's awful.

Welcome to the NBA, Mr. Rubio. The Hall of Fame is awaiting. 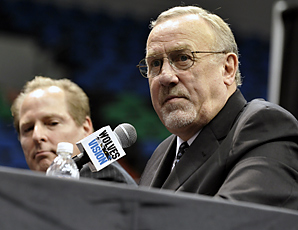 Somebody tell Wojo that David Kahn and Rick Adelman are friends now. My sources tell me that Kahn and Adelman took in a midnight showing of Paranormal Activity 3 last weekend.