I Love This Game

Share All sharing options for: I Love This Game 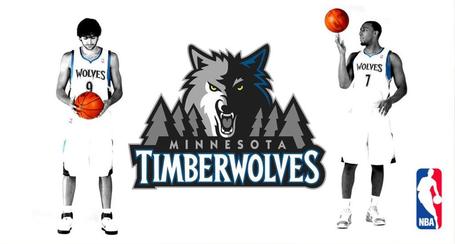 I know that I've fallen for it. I know that I'm a sucker for letting the NBA owners and players treat me like this and still coming back. I know that this could happen all over again when the next CBA expires...

I'm just happy that the game I love is back.

In case you have not heard yet, in the wee hours of Saturday morning, a tentative agreement was reached between the NBA owners and players that would have training camp open on December 9th and a 66-game season begin on December 25th.The owners and players still have to ratify the agreement, but David Stern and Billy Hunter both sounded optimistic.

What a wonderful Christmas present. It's 3:30 A.M. right now, but I just can't sleep. I'm too excited about all of things we're going to see this season from the Wolves and the NBA...

It has been 2 years, 5 months and 1 day since Ricky Rubio was drafted by the Minnesota Timberwolves, and while it has been fun to watch YouTube clips and Euroleague feeds from Rubio's games, the first time he steps onto the Target Center floor will be something special. I'm already having visions of alley-oops and no-look passes. Whether he turns out to be the next Steve Nash or he is only a mediocre point guard, at the moment, Rubio is like the best movie ever made that is finally coming to theaters.

I'm not much for Black Friday shopping, but if Target Center ever had a line to get into Timberwolves' games, I would totally camp outside to see Rubio play.

When I saw him play for Arizona last year, I was impressed. When I saw him at his draft workout this summer, I was skeptical. When I saw that we drafted him #2 overall, I jumped on the bandwagon.

After spending the past month and a half throwing down dunks with D-Will on NBA2K12, I'm ready for the real thing. You just know that he has been licking his chops to dunk on someone's head in his first NBA game. Our original schedule had us playing the Atlanta Hawks in the opener. Whether that is still the case is yet to be seen. If it remains the Hawks, I'd put money on Zaza Pachulia being in Mr. Williams' first poster.

Whether he's a power forward or a small forward, we finally have a consensus #2 pick on our roster who isn't a reclamation project. That's a very new thing for us.

Kevin Love in a Contract Year

If Kevin Love can put up such ridiculous stats in a normal year, just think what he's going to do in a contract year? Hopefully, David Kahn signs Mr. Love to an extension at some point before or during this season, but in the meantime, I fully expect Love to earn every one of the dollars he is about to get in his superstar-level contract.

At Canis Hoopus, Love is a player who has gone from polarizing (Mayo vs. Love, Jefferson vs. Love), to captivating (30/30), to the single reason that many fans stuck through the past two seasons. I'll be the first to admit that, initially, I was wrong about Kevin Love. Way wrong. I wanted O.J. I'm happy with how it turned out.

Kevin McHale and Jonny Flynn are still employed by NBA teams. This is true. As a Wolves' fan, though, it gives me great pleasure to realize that they are someone else's problem now. Good luck, Mr. Morey. Have fun watching McHale try to draw up plays in the huddle ("It was like a little Etch-A-Sketch" - Anthony Carter). Have fun watching Jonny Flynn try to "handle" the basketball.

Oh, and thanks for Coach Adelman. We certainly appreciate it.

One of the only drawbacks of attending every Wolves' home game is not being able to listen to Alan Horton's radio play-by-play. Thankfully, he does road games, too. If you have never listened to Mr. Horton, do yourself a favor and listen to him this season. Since KFAN went with the Minnesota Wild, I'm not sure what station will be carrying him this season. But this guy is too good not to be heard by Wolves' fans.

The in-arena basketball game experience gets criticized a lot. Much of it is justified. After all, the DJs, the silly contests, the product placement...the game has been watered down for the casual fan.

And yet, for me, there is nothing like being at an NBA basketball game. It's why I haven't missed one in 5 seasons. Even though I know all of the players by heart, I still get a program every game and read through the rosters as carefully as if I were seeing them for the first time. Even though I know I shouldn't, I still get cheese curds at halftime. And even though I'm a 28-year-old man with a full wardrobe, I still stand up during every t-shirt toss.

There are few feelings that can match that moment when your team is in a close game, every fan is on his or her feet and the place has a silent buzz that melds 10,000+ fans into a collective mind all cheering for the same outcome. When things go right, like when Michael Beasley hits a shot at the buzzer to beat the Clippers, the place explodes, Gary Glitter's Rock-and-Roll Part 2 comes on, and we cheer them home.

The only disappointment this year is that Mike Rylander is now in Los Angeles working for the Clippers and Natalie Kane is doing morning television.

There are many terrific blogs covering the Minnesota Timberwolves. A Wolf Among Wolves and TWolves Blog are both must-reads for me each morning. Yet, I don't believe that any Wolves' blog comes close to the level of Canis Hoopus. I'm saying that as a fan and as a reader who came here to read long before I posted a single game preview or wrote out a single comment.

Much of that credit goes to writers like Stop-n-Pop and Oceanary, who both produce content that often outshines the best blogs and sporting news outlets on the web. Even if I were to never post another Wolves' article again, I'd keep coming back here for those two and for all of the fantastic contributors to this site. I've said it many times before, but I truly believe that we have some of the most intelligent basketball minds on the planet on this site. I've learned more from the comment sections of these articles than I have from years worth of content on ESPN.

Now that the lockout is ending, we can stop talking about Occupy Wall Street and Jerry Sandusky and start talking about the Wolves again. I'm very thankful for that.

These are just a handful of the things I've excited about for this NBA season. I'm also excited to see how the Heat respond to losing in the NBA Finals; the crazy rings that Mark Cuban has bought his team; what guys like Kobe, Nash and Duncan have left in the tank; JIMMMMMMMEERRR!!!; Blake Griffin poster dunks; Durant with another year of experience under his belt; whether the new CBA makes it easier for New Orleans and Orlando to hold onto their superstars; Shaq joining Inside the NBA; the Lynx' back-to-back championships*; another fantastic NBA playoffs; not having to watch college and Euro basketball all winter; real NBA2K12 rosters; the Wolves' 2012 playoff run.