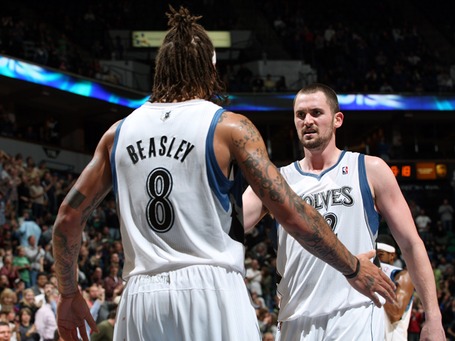 Some call them 'preseason games'. I like to think of them as warnings to the rest of the league not to show up this season.

The Minnesota Timberwolves enter the 2011-2012 season with a lot of question marks. With a new coach, a new front office attitude and some exciting new players (plus one we had kept on layaway for the past two years), there is a lot to learn in a short period of time.

Coach Rick Adelman will certainly use the team's two preseason games (the second is Dec 21st in MIL) to try out different lineups and start to develop a rotation before season opener on December 26th against the Oklahoma City Thunder.

While starting lineups are somewhat meaningless in this game, I'm going to break down what I think are the most interesting matchups between the Wolves and Milwaukee Bucks. 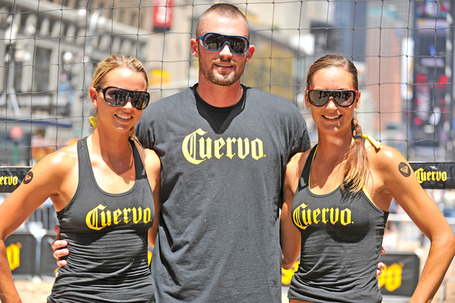 It's pretty easy to lose weight when you have workout partners like these.

Kevin Love is coming into tonight's game with a slimmer physique, an expiring contract and a desire to become the leader of this basketball team. Unlike some superstars who beg their way into trades, and wind up getting dealt for Eric Gordon, an expiring contract, two awful young players and a 1st round pick in the high 20s, Love remains devoted to Minnesota.

Given Rick Adelman's desire to make Love more of a facilitator, and with the Wolves' improved offense, perhaps Love's rebounding numbers will go down this season. His increased scoring and assist numbers should compensate, however, and a few triple doubles may not be out of the question.

For the Bucks, Andrew Bogut will once again be starting at center. Bogut is another example in a long line of overpaid centers in the NBA, who added DeAndre Jordan, Kwame Brown and Marc Gasol this offseason. All that money, however, cannot help him box out K-Love. 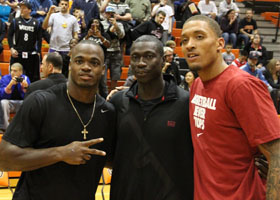 Adrian Peterson, showing how many wins the Minnesota Vikings will finish with this season.

Michael Beasley is not here to talk about the past. He's here to focus on this upcoming season, which according to him, includes helping the Minnesota Timberwolves into the playoffs. So, we shouldn't talk about all of his troubles off of the court. We shouldn't mention his inefficient scoring last season or his complete failure to do anything that an impartial observer might describe as defense. We definitely shouldn't mention his ankle injury or the young rookie waiting in the wings who might be a better version of Michael Beasley.

Let's also talk about Jon Leuer, the Wisconsin Badger standout who is currently the second best big man on the Milwaukee Bucks, behind Bogut and way ahead of Drew Gooden, Ersan Ilyasova and The Artist Formerly Known as Jon Brockman. 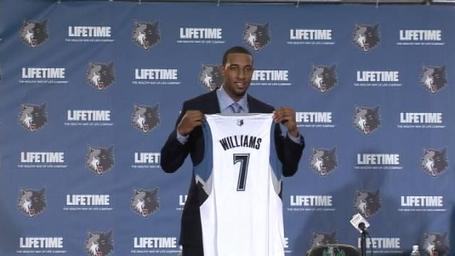 The #2 overall pick Derrick Williams draws a variety of opinions from Wolves fans and from basketball fans across the NBA. Is he better suited to play the 3 or the 4? Is his shot good enough to make him an efficient offensive player? Can he defend at the pro level? What makes him different from Michael Beasley, and if that answer is nothing, can those two co-exist together?

While we sort out the answers to these and other questions over the course of Derrick's rookie season, we can at least be thankful that the Wolves took the consensus #2 overall pick and didn't reach for someone like Bismack Biyombo, who is rivaling only Harrison Barnes as the most hyped prospect who has yet to play in an NBA game. If nothing else, Williams should at least average a couple of SportsCenter highlights per game.

The Bucks matched the offer sheet that was signed for restricted free agent Prince Luc John George Michael Ringo Richard Mbah a Moute and hope that the former UCLA player can develop some offensive skills to go along with his stellar defense. He perfectly fits the Milwaukee Bucks' current front office strategy of acquiring every overpaid, slightly-above-average NBA player in the league. 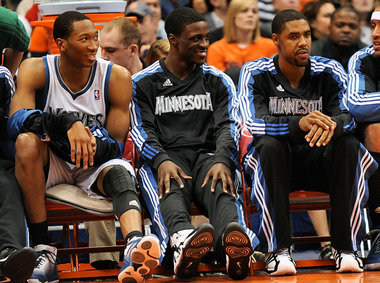 Wesley Johnson is the last member of the Timberwolves' farm system in Syracuse, after Minnesota decided to move its minor league operations to UCLA.

While J.J. Barea may end up playing a lot of minutes off-the-ball at the two guard position, Wesley Johnson is still likely to get the start here, especially if he can continue to improve off of his 2011 Rookie of the Year-like season. In Rick Adelman's offense, which includes a lot of moving with out the ball and cutting off of screens, Johnson's shot and style of play should fit perfectly. Likewise, Johnson's already-solid defense will continue to improve under Adelman.

Thankfully, it looks like Wolves' management will not make the mistake of trading Wes in a package for the vastly overrated Kevin Martin. Instead of Martin, who makes up for his "efficient" scoring by letting up just as many points on the other end, Wesley Johnson will contribute on both ends this year. I expect by the trade deadline, people will be talking about Johnson as a valuable chip and will be mentioning Kevin Martin after Houston has to bribe some team with a 1st round pick in order to shed his contract.

The Bucks brought in veteran Stephen Jackson, via a trade for Corey Maggette, who has to be thrilled about joining a fringe Eastern Conference playoff contender during the twilight of his career. At this point in his career, it seems the only rings Stephen Jackson is chasing are made of onion. 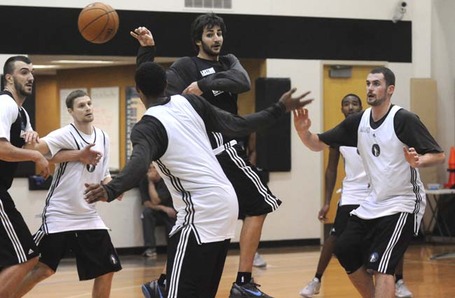 Timberwolves players were perplexed when Ricky Rubio threw a ball that was not going towards the basket or out-of-bounds. Rick Adelman spent the next 20 minutes defining the word 'assist' to his players.

"Yeah, I think I'm a better player than [Rubio] is. I just shoot the ball better than he can. The only thing I've seen him do sometimes is when he has a home run pass or something like that. I think the dude is just all hype. I can't even front. I'm just going to be real with you guys." - Brandon Jennings before the 2009 NBA Draft

The hype is here, Brandon. You've spent the last two seasons lowering expectations after dropping 55 on Golden State...and then not really doing anything, except shooting 39% from the floor last season. So much for that whole, "I just shoot the ball better," thing.

Ricky Rubio has quickly surpassed Joe Mauer and Adrian Peterson as the most liked professional athlete in Minnesota and we're finally going to see him on the court after two long seasons. Rubioops. Rookie of the Year. Redefining the point guard position.

Read it and weep, Brandon. Have fun with that 8th seed and getting swept by the Heat in the first round. 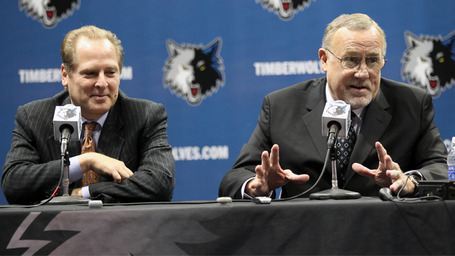 I think David Kahn and Rick Adelman would be the first to tell you that they are the two smartest people in our league.

After two losing seasons and a long lockout, I have not been this excited for professional basketball in a long time. I can't wait to start building hype for the season based off of a preseason victory.