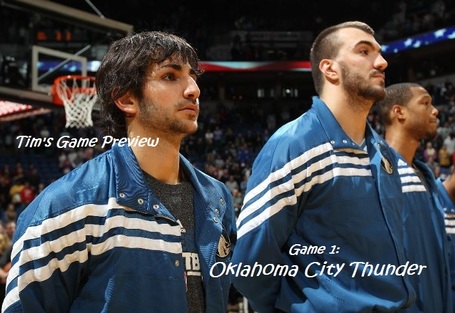 It is probably safe to say that Minnesota Timberwolves fans have not been this excited for a season opener since Kevin Garnett was traded to Boston. Finally, the team has a top-10 NBA player; some promising rookies whose past achievements do not need to be sugar-coated or made up in order to feel good about them; an experienced coach who knows what he is doing; and casual fans who are energized and excited about the on-the-floor product.

I expect the Target Center to have a very loud and very entertaining atmosphere tonight.

The Oklahoma City Thunder are in town, having already played their first game of the season last night against the Orlando Magic. The 8-point margin is deceiving, as the game was not close until the final period, when the Thunder let up a little bit. Kevin Durant scored 30 points on 19 shots and James Harden added 19 off of the bench. We'll see how much energy they have left after ending last night's game around 9:30 PM and flying to Minnesota.

Let's break down the matchups for the Wolves' season opener: 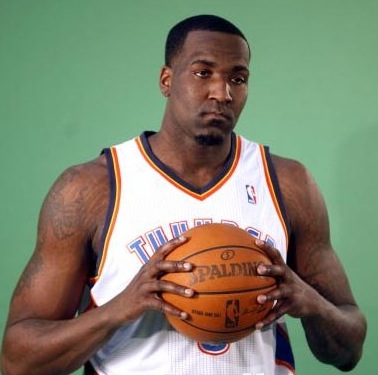 Kendrick Perkins, flashing his best smile for the camera on Media Day.

The biggest problem for Darko Milicic, throughout his career, has been the wild expectations that fans have had for him. As soon as he arrived in Minnesota, there were doubts about his talent and his ability to draw the most out of his potential. After last season, those doubts only grew. Some fans even wanted Darko to be amnestied by the Wolves or hoped he would retire from the NBA altogether.

Yet, if people would correctly adjust their expectations - to a Hall of Fame-level defensive center - they might finally be satisfied with what Darko brings to the table. Don't expect 10 points per game or other crazy offensive production. Let him sit back and take away the paint. Kendrick Perkins isn't scoring in this game and guys like Durant and Harden will think twice before challenging Darko in the lane.

Additionally, look for Nikola Pekovic to have a breakout season and make teams regret that they didn't move on him when they had a chance. 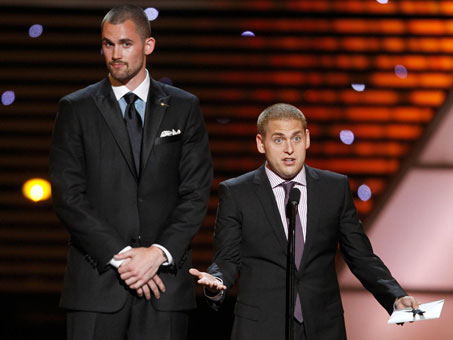 How have these two not been in a Subway sandwich commercial yet?

What is left to say about Kevin Love at t his point? He does so many things well that it would be near impossible to not think of him as a top-10 NBA player. His desire to stay in Minnesota is unquestionable and it is nice to have another superior athlete who wants to play here. Hopefully, Love's long-term tenure with the Wolves will go much more smoothly than Joe Mauer's or Adrian Peterson's.

For tonight's game, I expect Kevin Love to have a field day. Last night, the Thunder gave up 25 points to Ryan Anderson, who went 6-of-12 from three point range. If Anderson can put up a 25/10 against the Thunder, Love could have a ridiculous output. Serge Ibaka played horrifically in last night's game - 0 of 1 for 0 points, 6 rebounds, 2 turnovers and 3 fouls in 23 minutes - and Love will destroy him and Nick Collison.

You heard it here first: Kevin Love will be a viable candidate for MVP by the end of this season. 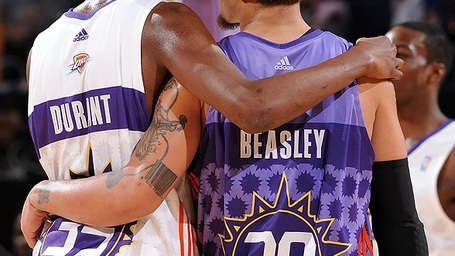 Now that the Timberwolves have drafted Derrick Williams, they have three lockdown wing defenders to throw at Kevin Durant.

Kevin Durant is pretty good, I guess. He might be the best pure scorer in the NBA. His height makes him one of the hardest covers in the league, and he's unselfish, which makes him even more deadly.

And yet, you don't see me choosing Durant to win this matchup. You know why? It's not because Durant got food poisoning before the game (unfortunately, my waiter friend Keith had the day off today). It's because the Wolves have three lockdown defenders - Beasley, Williams and Wesley Johnson - to throw at Durant. All three have a strong track record against volume scorers and will have Durant shooting in a phone booth all night.

Besides, it's hard to score when you have Beasley hitting long two-pointers and Williams dunking on your head all game long. 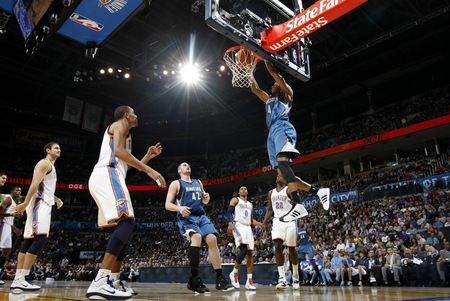 Wesley Johnson is attempting to be the first second-year player to ever win the NBA's Rookie of the Year award.

The Thunder start Sefolosha at shooting guard, but really, that's only to preserve James Harden's Sixth Man of the Year eligibility. Harden plays the bulk of the team's shooting guard minutes and takes the third most shot attempts on the team. Last night, he only shot 4-of-11 from the floor, but went to the line 12 times, which is how he finished with 19 total points.

Harden is also 2 years younger than Wesley Johnson, despite being drafted a year earlier. (copyright: PoorDick). While some look at this as a disadvantage for Johnson, I am one of those rare people who is not ageist, and thinks that elderly people should have the same rights and opportunities as young people. I also think that life experience can be just as important as in-game experience.

Like my parents trying to learn how to use their new iPads, it sometimes takes elderly people like Wesley Johnson longer to grasp newer technologies. Now that Wes has had a little bit of time with the NBA, I expect that he will find much greater success this season, even if he still doesn't know how to play Angry Birds or what an LMFAO is. 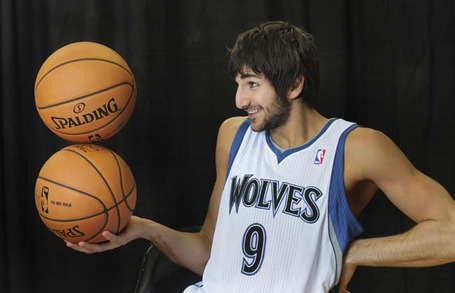 I'm ignoring the fact that Rick Adelman will likely start Luke Ridnour tonight. We all love you, Luke. It's nothing personal. But let's face it. We've been staring at that Christmas present under the tree for the last two and a half years, and now that we finally get to unwrap it, we don't really care about our old toys right now.

Along with J.J. Barea, Johnson, Ridnour and Malcolm Lee, the Wolves finally have a dominating backcourt rotation. Russell Westbrook is an overrated ball hog who only takes shots away from Kevin Durant. Our backcourt is full of unselfish players who would all rather get an assist or a defensive stop than make a shot.

Tonight is going to be the start of something very special. 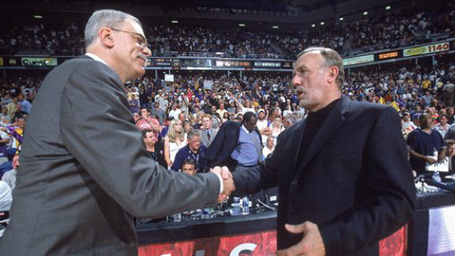 According to the, "Phil Jackson Coaching Osmosis Theory", first discovered by Kurt Rambis, this handshake alone should be worth 10 wins.