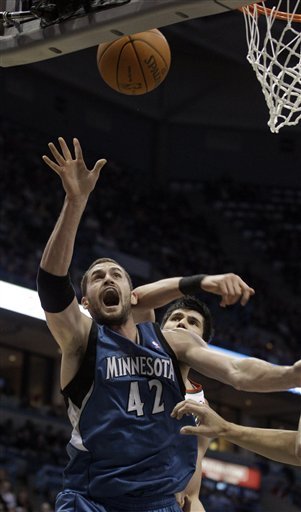 I really want to see the Popcorn Gameflow for this one, because I have a feeling the Wolves lost this one for themselves with their rotations (or in this case, their lack thereof). Not that they didn't lose it other ways...turnovers (25), poor shooting (40%)....or that the Bucks played great. Captain Jack scored 16 points on 20 attempts. Bogut scored 15 on 20 attempts then fouled out. Somehow the Bucks always get you to play as ugly as they do. The Wolves won the three point battle (6-2) and Love shot more three throws by himself than the entire Bucks team combined, but they badly lost the made shots war and committed over twice as many turnovers as they dished assists.

But the Pups still found themselves down by 20 in this game, and I know I can't be the only one wondering why the coaches kept the starters on the floor. Darko/Love/Beasley/Johnson/Ridnour was not good. Just like it wasn't good all of last year. Love + Tolliver/Rubio/Barea is. I know the staff is all new, but it can't be that hard to grasp the concept, right?