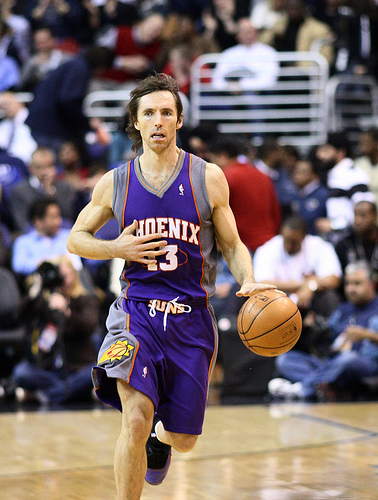 Let me be the first to say I didn't believe it either, at first. The initial published report on this came out a week ago, and I got a couple hints on it even before that, and to say my first reaction was disbelief would be an understatement.

So I did some asking around, and without revealing all that went into that...yes, the Wolves have made several calls about Nash.

But discussion about Nash's merits aside (and feel free to discuss that, by all means), what I think this really says the most about is David Kahn. There's insight to be gleaned by him showing his hand in this way.

Even by his own admission, Kahn is not a talent evaluator; he's an economist. His mindset is dollars and cents, so when he goes shopping, he's looking for bargain deals. In the NBA, that means:

It's bottom feeding. It's trying to pick up talent on the cheap because their teams don't want them, for one reason or another. Sure, Nash hasn't demanded out, nor have the Suns actively shopped him, but they both know Phoenix is far from a contender. That team ran its course, watched as Joe Johnson, Shawn Marion and Amare Stoudemire all departed, and are left with Nash and scraps now.

Big picture, Kahn has painted himself into a corner and is trying to get out the only way he knows how. You look at a GM like Otis Smith down in Orlando...when he felt the pressure, he went out and turned over $60 million worth of contracts to overhaul his team. That's not Kahn. Nothing is his history....and this goes all the way back to bottom feeding for Jermaine O'Neal with the contract of a 32-year-old Dale Davis...suggests that Kahn will shoot for anything above the bargain bin.

This isn't a case of some brilliant, long standing plan. There is no plan. Kahn helms a team with the second-worse record in the league, sitting between an owner who has publicly stated he expected more wins and a Euro point guard who repeatedly says he wants to be on a winning team. He's promised a "singular move" and hasn't delivered yet, and his "5 windows" have long since closed.

What Steve Nash is, is a desperate home run swing. It's an attempt to grab a player that people will pay to see, who will legitimately get the team wins, who would be a major draw to the Spanish Sensation to commit to playing here, and who he can try to trumpet as his "singular move".

All Steve Nash is to the Wolves is David Kahn being David Kahn.