One of the things we used to keep track of back in the days of Witt was whether or not the Minnesota Timberwolves, a professional basketball team in the professional National Basketball Association, could post an eFG of less than .300.

Could such a thing be possible?

Tonight was one of those nights where had it not been for a functional first quarter, I think the Wolves could have given the .300 mark a run for its money--at the very least they could have made it past .350.  They ended up shooting an eFG of .386.  BTW, did you know that the all-time eFG low for the franchise is .310? That was against the Spurs.  KG and Steph went a combined 13-45.

Tonight against Sixers, Our Beloved Puppies couldn't hit the broadside of a barn.  Their dynamic duo of Jonny Flynn and Wes Johnson went a combined 6-21 from the floor.  Take that KG and Steph.

Don't look now but the team is making its way back towards the -6 point differential mark.  It plays the same with 4 major rotation players as it does without them.  They are mind-numbingly, repetitively, and soul-crushingly bad.  This popped up in the comments: 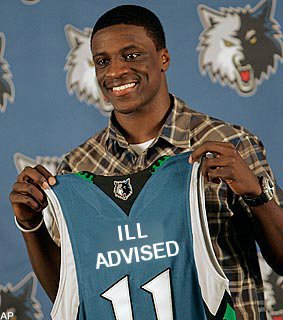 It is unfathomable to me that the people who have conducted the past two drafts will be allowed to have any insight on this year's festivities.

I didn't really have a clear idea of how to write about this mess from the get-go.  Now, I really don't know.  Where are they going?  What is the point?  They can't possibly let Kahn draft any more players, can they?  They can't possibly think that Rambis will be able to coach any of these guys to success, right?

Tonight's announced attendance was 17,011.   Seriously.  There was some nice energy in the 1st quarter but it went quickly downhill from there on out.  It was disjointed and incoherent.  They were out-coached, out-physicaled, out-hustled, out-shot, out-everythinged.  I turned it off in the 3rd quarter and crumpled up my notes.  It was pointless.

If there was an overall game wrap for last night's game it would involve the complete inability of the Wolves' perimeter players to offer up anything close to defense.  The Wolves were taken apart at the seams off the dribble and in transition by piss-poor wing/perimeter play.  It was awful.

Of course, the other team is being led by a head coach who actually seems to reward his players for good defensive play.  That was the big contrast of the night.