Here's what I propose...

Share All sharing options for: Here's what I propose... 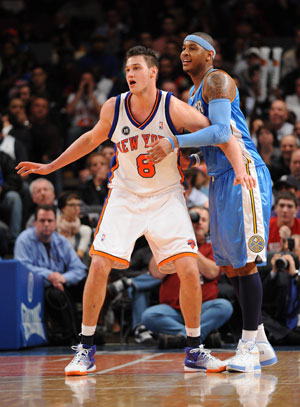 Here's the latest trade chatter, good Hoopusters -- your beloved Timberpups are about to be outsmarted by the New Jersey Nyets.

What do I mean, by that? Well first, let's revisit the last Melo update we had:

A Timberwolves source told ESPN The Magazine's Ric Bucher on Sunday that the team would not approve of a deal where the team received just New York's Randolph and Curry with Brewer and a first-rounder heading to Denver. While these are the names currently being discussed, additional players could be added to make a deal possible, sources said.

Makes perfect sense, right? Who wants to lose Corey, a first rounder, and cut a buyout check just to get Anthony Randolph? I don't. I'm guessing you don't. And I'm pretty sure Glen Taylor doesn't either.

The key to that little quote is the last line. "Additional players could be added". We talked about Danilo Gallinari. I think it's fair to say we generally like the guy. Kalenna Azubuike? Ronny Turiaf? Chris Andersen? Great. Fantastic. And it's happening, except....those additional players are going to the Nets.

EDIT: A 'Melo trade has gone down, but there's conflicting information about what the Wolves' exact role is in it. We're working to verify things

Yesterday, there was some chatter that the Nuggets were demanding Timofy Mozgov be included in the Melo deal.That really struck me as Denver pushing its luck. They were already getting a fantastic deal, and Nene is one of the few players they have that would survive a Melo trade and still be worth building with. But today the pieces fell into place. Per ESPN, the Nets now have a followup deal in the works with the Nuggets. Denver would get Gallinari, Wilson Chandler, Raymond Felton, and Timofy Mozgov, then immediately send Mozgov and one of the other three (I'm guessing Gallo) to the Nets for a pair of first round picks.

And the Timberwolves? Relegated to the end of the bench. No longer do the Knicks want that late first rounder for Randolph. Instead, they want us to take Eddy Curry off their hands so they can clear the cap space to keep Anthony around.

So here's what it's come down to. The Timberwolves are being asked to pay Eddy Curry to get just Anthony Randolph, while watching a player that would actually make that buyout check worth it (Danilo Gallinari) head off to Newark.

That doesn't make any sense. Kahn is letting himself and the team get kicked to the curb and then just sitting there and watching as the new kid in town swoops in and steals the talent we could and should be getting.

To give an example and build a case for this piece, came up with a deal that not only works, but more or less fulfills everyone's wishes: 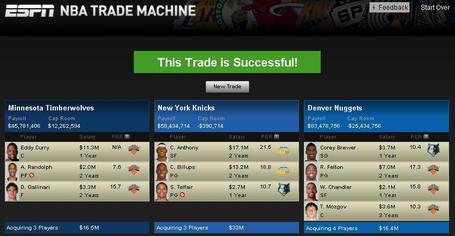 Throw in a Minny 2010 first rounder and NYK 2014 first rounder, and there you go. The Knicks get Carmelo, a couple point guards to hold things down until the seemingly inevitable run at Chris Paul or Deron Williams, and they unload Curry's contract. The Nuggets get cap relief (a major priority for them), the player they wanted all along (Wilson Chandler), a couple picks and the assets to complete their deal with the Nets for more picks. And our Pups get not only Anthony Randolph, but also Gallinari, which makes taking on Curry's debt a lot easier to justify. The only real work needed is convincing the Knicks that Telfair (or Flynn or Ridnour...it works with any one of those three) is worth bringing on board. Doesn't sound too hard.

And this deal can be adjusted in a lot of different ways. Maybe the Nuggets don't want Corey Brewer: you could send them Wes Johnson, or some combination of Ellington, Hayward and Tolliver instead. Maybe the Nets want a little more for their troubles: add Pekovic or Koufos or Ellington to the Knicks' end to be sent on. Maybe the Wolves want more for taking on Curry: have the Knicks throw in Ronny Turiaf or Kalenna Azubuike, or get Chris Andersen from the Nuggets.

The point is, there's no reason why the Wolves should suddenly be on the outside looking in at this. That's absurd, and quite frankly, pretty scary. The team has a chance to be active and really acquire some talent here, and instead it's letting itself get bullied around and cornered into a situation it can't afford to be in. We can't afford to cut a huge check to Eddy Curry to field test Anthony Randolph for a couple months.

It shouldn't be hard for the Wolves to get back in this game. Hell, I took five minutes with a free, public-access fantasy trader and got something reasonable enough to make an opening pitch with. If Kahn and company can't even get as far as a volunteer blog site, what more can really be said?