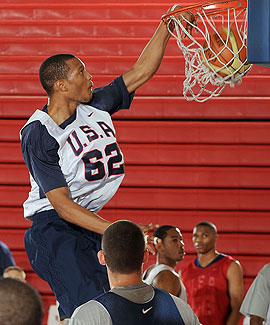 S-n-P and I were both very adamant that Glen Taylor wasn't going to cut a massive buyout check for Eddy Curry to pick up Anthony Randolph. And he wouldn't have. But it turns out he won't actually have to. If I did the math right, the Wolves are actually just about breaking even here.

Start by sourcing shrink's fantastic work on Eddy Curry's contract. The overall thing is worth over $11 million this season...which is why it had to come off the Knicks' books....but the Timberwolves are only responsible for the part the Knicks haven't already paid off (40%), plus his trade kicker ($600,000). The formula therefore is:

$5 million is obviously a lot less than $11 million. By sourcing ShamSports, we then find salary figures for Brewer and Randolph:

And the final piece....and what will get this deal green-lit by Papa Glen....is $3 million in cash the Knicks are sending with Eddy Curry. So the final tally is:

I definitely, initially sold Kahn short on this one. Making the salaries in this a wash is good work. It's very similar to how he essentially got Luke Ridnour for Ramon Sessions by buying out the tiny guaranteed portion of Delonte West's contract. Brewer was definitely not going to be a part of this team's future, but it did actually have to be specifically him in this deal because of that $3.7mil figure.

And of course, credit shrink for setting the record straight for us. Even though we didn't catch on at the time. Differentiating the pro-rated portion of Curry's deal from the whole thing is a game changer. It's what makes this deal possible.

It's still not the "singular move" Kahn promised. I still won't be happy if I watch Gallinari and Mozgov get shipped to New Jersey. But knowing that the team breaks even on this....rather than footing a multi-million dollar buyout bill just to pick up Randolph...definitely makes this deal a lot easier to get behind. The risk/cost factor is a lot less than initially assumed, because the actual cost is just about zero.

UPDATE/CORRECTION x2: Turns out the math ended up being a little too clever for all of us, but by taking the pieces we get from a couple people, we end up with basically the same result:

Also, Kosta Koufos has now been added into the trade as "outgoing". So the revised math here is:

So, by final math, the Wolves actually get paid $580,000 in for this trade. Which probably isn't what will actually happen....the Knicks will probably send just as much cash over as needed to make the final balance $0. So for the sake of simplicity, we'll say the Wolves break exactly even here.